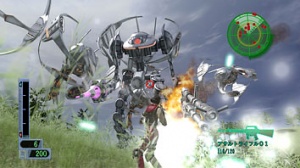 Borrowing liberally from a rich heritage of alien invasion material, Earth Defense Force 2017 offers a scenario straight out of War of the Worlds, with elements from the likes of Godzilla, Starship Troopers and Independence Day thrown in for good measure: Massive spacecrafts descend over Japan, bearing a locust-like horde of gigantic insects, robots and monsters. Hopes that they’ve arrived to bestow their intergalactic wisdom upon humankind are soon dashed. Alas, they’re here to eat us.

Luckily for Earth, world leaders had been planning for this sort of thing. Enter the game’s namesake: the Earth Defense Force, of which you, the player, are a key member. Represented as a plain and quirkily animated avatar, you’ve got two large guns, unlimited ammunition and a mandate to destroy.

In terms of gameplay, there’s nothing complicated about EDF 2017‘s bare-bones, third-person shooter approach, which amounts to series of numerous short encounters in which the goal is to kill everything that isn’t human. You’ll start out with your choice of a few simple weapons, like an automatic rifle and a rocket launcher. With power-ups dropped by defeated foes, you’ll gradually earn more effective tools of war, like homing missiles and plasma cannons. You’ll also slowly increase your armor rating so you can withstand more damage.

Some missions are mere minutes in length and require little more than cleaning up alien-infested areas. Others featured scripted events and can last a quarter of an hour or longer. The early levels, with their downtown death squads of madly scurrying Terror Ants, are surreal but simple playgrounds that barely hint at the fun to be had. It isn’t until several missions later, when the bipedal metal monsters with death-ray arms appear, that the game really hits its stride. 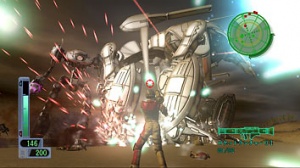 Although EDF 2017‘s visuals feature limited physics, simple lighting effects and cookie-cutter landscapes, it still manages to impress. Its enemies are epic in size and number, fighting for screen space with a never-ending swirl of projectiles, smoke trails and screen-shaking explosions. It’s hard to overstate the fun to be had in lobbing volleys of heat-seeking cluster missiles at a 20-story behemoth while its slow-moving, luminous plasma projectiles arc and scream across the sky. Or watching it lurch and stumble as the missiles strike, to explode into a spectacular fireball. It’s also hard to describe the sense of dread as dozens upon dozens of graceful gunships appear like a glimmering cloud in the distance, silently gliding into the range of your rockets, where they tumble to your feet and burst into flame.

Some of EDF 2017‘s mission maps are beyond huge, and every last structure can be blasted apart. With bazooka in hand, you can carve a path of perfect destruction, mowing down the bugs that fill the streets and even scurry up and over the sides of buildings. The sound effects, especially the alien death-ray noises, are pure vintage cool. It’s an odd mix of low-fi, almost retro style and legitimately impressive next-gen tech.

The awe that the game sometimes inspires is often paired with gleeful panic. It’s hard to remain calm when your onscreen radar lights up like a Christmas tree, and seconds later hundreds of minivan-size spiders come leaping over the horizon to sling sticky webbing in your direction. Thoughts of “this is awesome” are often followed by “holy crap” and “I’m going to die.” It’s a convergence of emotions echoed in the hilariously campy exclamations of your fellow EDF fighters. “I’ll kill you with one shot!” one will announce boldly to a swarm of oncoming ants, just as another realizes that the deadly insects are squirting acid: “It’s dissolving my armor, aaaaauuugh!”

Rampaging around with generic teammates can be highly entertaining, given their penchant for enthusiastically pointing out the obvious: “The super-robots! They’re destroying out town!” they’ll exclaim, as the super-robots destroy their town. When enemy gunships appear with new weapons, they’ll complain: “Awww, man … they’ve got laser cannons!” The troops are all seemingly voiced by the same actor, which makes it even funnier when they argue with each other: “You’re scared, arent’cha?” “No! Shut up.” 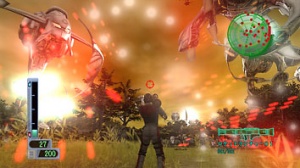 Small crews of EDF team members can help distract monsters, but in many missions they’ll all get killed off, leaving you to fend for yourself. Due to the often overwhelming odds, a Serious Sam-style “run backwards and shoot” technique is often the best means of survival. Though you’ll gradually amass a huge arsenal, you can only carry two guns at a time, which you’ll have to select before each mission begins. Short-range devices like flamethrowers and assault rifles are the ideal weapons in many situations, but in encounters with skyscraper-sized foes, you’ll want missiles or rockets, preferably of the large and heat-seeking variety. Start a mission with the wrong pair of guns, and you could be doomed to failure.

Thankfully, EDF 2017‘s 50-odd sorties are bite-sized, fast-paced encounters that can be restarted or replayed with minimal fuss. They’re also varied enough to keep things interesting. Many involve urban cityscapes, but there are also subterranean tunnels to invade and vast beachheads to defend. Enemy sizes and numbers run the gamut from mission to mission, and there’s no less than seven unique weapon categories, with a whopping 170 variations.

Although vehicles aren’t featured in every mission, it’s not uncommon to find one or two strategically placed to wipe out an oncoming assault. They include a powerful but slow-to-reload tank, a zippy hoverbike outfitted with machine guns and a slothful but heavily-armed mech-type walker that can boost itself vertically above the battlefield. There’s also a helicopter, but its cumbersome controls are way out of place in EDF 2017‘s arcade combat environment. Sometimes a tank or mech battle can really round out a mission, but just as often the vehicles can be ignored in favor of simply dodging and attacking on foot. In fact, once you’ve collected the game’s more powerful weapons, the vehicles aren’t nearly as useful.

Though it cuts some corners in terms of visual polish, EDF 2017 is still a well-tuned game. With the exception of occasional frame-rate drops (hardly unforgivable given the amount of onscreen action), it’s free of distracting glitches and bugs. Its core shooter mechanics are simple and satisfying, and short load times offer near-instant gratification. Although there’s no online multiplayer component (arguably a tragic omission), there is a split-screen cooperative mode. 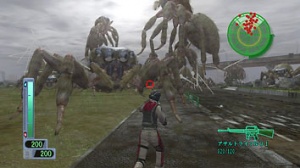 Replayability is encouraged by the fact that all unlocked weapons can be used across a series of five difficulty levels (ranging from walk-in-the-park “Easy” to the seemingly impossibly “Inferno”), but it’s unlikely that many players will stay interested in the game’s simple mechanics long enough to play through the story more than once or twice. EDF 2017 is loads of fun, but let’s be honest: Like any game of its type, it eventually begins to wear thin. Unfortunately, the game’s uninspired achievements, of which there are six, are awarded only for completing every mission at each difficulty setting and for unlocking all 170 weapons.

EDF 2017 seems destined, like its two budget-priced PlayStation 2 predecessors released outside the U.S. under the Chikyuu Boueigun series name, to enter the realm of the cult classic. It may have less variety in terms of missions and gameplay than 2005’s Chikyuu Boueigun 2 (which had a second jetpack-equipped playable character), but it’s still a solid introduction to the series for U.S. audiences. With any luck there’s a sequel in the works that will support Xbox Live.

EDF 2017 brings back memories of youthful arcade excesses, when a single, immediately enjoyable game could consume pocketfuls of quarters for hours at a time. Like any good B-grade sci-fi experience, it strikes that rare balance between campy humor and outright stupidity that makes its flaws not only forgivable, but charming. At its best, its battles are downright spectacular. If you’re looking for a great pick-up-and play shooter, you could certainly do worse.

Editorial: The New Reality of MMOs