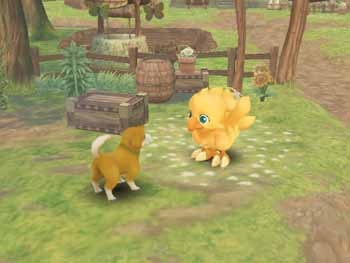 Playing Final Fantasy Fables: Chocobo’s Dungeon is sort of like biting into a piece of sugary candy to discover there’s actually a bit of chewy steak hidden inside; you’re likely to go into the game expecting one kind of experience only to end up with something completely different altogether.

At a glance, it seems the hyper-cutesy trappings and bubbly personality oozing from every pore of Square Enix’s third venture on the Wii all but guarantees it will be dismissed by a large swath of gamers who mistake it as a title for younger audiences. After all, almost every facet of Chocobo’s Dungeon is drenched in syrupy, sweet cuteness. The game’s playful, lighthearted nature and easy-to-grasp gameplay are certainly accessible to a broader audience, but delving past the first few layers of cushiness reveals a surprisingly challenging dungeon crawling RPG adventure.

While hunting for treasure, Chocobo and his human companion Cid accidentally find themselves teleported to the village of Lost Time where the local citizens mysteriously lose their memories each time the bell tower in town tolls. Some townspeople welcome the enforced forgetfulness, yet others struggle to regain their recollections of the past. With the arrival of a magical baby – hatched from an egg that falls from the sky, of all places – Chocobo gains the power to journey into the minds of Lost Time’s residents (these mental jaunts serve as the game’s dungeons) to recover their missing memories. Layers of the plot begin to unfurl as you help more of the townspeople remember.

There are a few moments when the presentation reaches a nauseating pitch – primarily due to cheesy voice acting and occasionally dull, oversimplified dialog – but the plot is otherwise compelling and really quite good. It’s easily on par with much of the high-end storytelling featured elsewhere in the Final Fantasy series, though it’s toned down a bit for the kiddos.

A simple, no-frills control scheme also works well with the game’s overall ease of use. Support for the classic controller is appreciated, but the D-pad and buttons setup of the Wii Remote (held either sideways or upright, depending on personal preference) does the trick nicely. In the latter case, limited motion control is actually implemented in a subtle and useful way; a gentle shake of the Wii Remote at the inventory screen automatically sorts all of your items. Superb.

Exploring the lushly detailed environments of Lost Time and the safe farmland just beyond the reach of the bell’s resonance is pleasant enough, and chatting up the cast of oddball characters isn’t overly tedious. The malevolent town bell always seems to have a knack for ringing just when the person you’re conversing with is about to reveal some crucial tidbit of information, causing them to forget their words in mid-sentence. This signals an opportunity for Chocobo to go spelunking in the dark temporal goo of their psyche to unearth the appropriate memory. Locating these stolen memories is the key to advancing the storyline, unlocking classic job classes, and opening up other opportunities for exploration in the game. 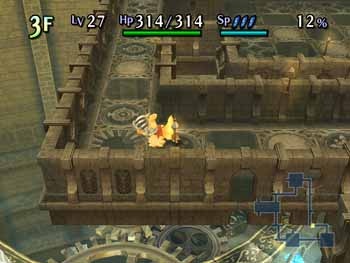 The gameplay takes a dynamic turn, once you start jumping into peoples’ heads. Laid out in a series of randomly generated, multi-level grid environments, dungeons are turn-based affairs where every action you take advances the entire floor by a single turn – in Roguelike fashion. Each step gradually replenishes your health and magic, but it also gives the wandering denizens an opportunity to move around or take a swipe if you venture close enough to get their attention.

Combat boils down to trading blows with your adversaries and using magic or special abilities to improve your advantage whenever possible. Monsters typically wander in a set pattern or lie in ambush until you approach. Get too close and they’ll take more than a passing interest in your feathery hide. Just like when you’re exploring, each movement or action you take gives other nearby creatures an opportunity to react. This allows other wandering beasts to take notice and jump into the fray, making for some occasionally frantic encounters where you’ll end up surrounded on all sides. Fortunately, there are plenty of opportunities to discover items and hone equipment to aid in handling tougher encounters down the line.

Surviving long enough to progress through the deeper dungeons and take down the bosses later in the game requires use of special abilities gained from leveling-up numerous job classes uncovered throughout the adventure. Old-school Final Fantasy classes like the knight, white mage, black mage, and ninja are among a handful of other jobs Chocobo can take on by donning an adorable costume at the start of each dungeon.

Soon after the story picks up, the dungeons increase in size and become much tougher to complete. In addition to taking out monsters and dodging traps, you’ll be continually searching for the stairway to the next floor. Tracking Chocobo’s hunger meter also adds another level of complexity, since you’ll begin to take damage with every step, if you venture for too long without a snack. Successfully navigating their depths becomes a very deliberate process requiring strategy and a careful approach. The steady increase in difficulty as time progresses doesn’t grind the gameplay to a halt, but you’ll find a little extra time spent leveling-up goes a long way.

Chocobo’s Dungeon proves appearances can be quite deceiving. Despite its extremely kid-friendly exterior, the game has a lot of depth. It strikes a decent balance between pouring on the charm and offering a lengthy and challenging RPG adventure. Regardless of whether you favor one end of the spectrum over the other, there’s some good middle ground to be explored here.

Bottom Line: Look beyond the curtain, and you’ll find Chocobo’s Dungeon is a far more than a kids’ game. It’s one of the better RPGs available on the Wii and a good starting point to get into the dungeon crawling genre.

Nathan Meunier is a robot made of meat. He’s also a freelance writer with an unhealthy video game obsession.