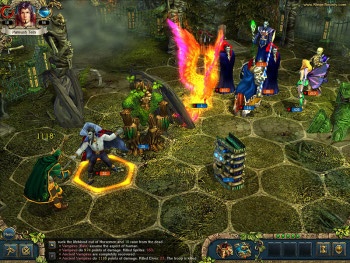 King’s Bounty: The Legend is completely out of its mind. The game’s explosively bright color palette, cartoony medieval stylings and magic knight superheroes call to mind something akin to World of Warcraft, but a Blizzard game has never been this insane. What other game lets you marry a zombie, have kids with her and then givess you money and stat bonuses for raising a monstrous human-zombie hybrid family?

There’s genuine anarchy at the heart of King’s Bounty, both in its whacked-out vision of an archetypal fantasy world and its meticulously complex gameplay. A modern remake/sequel to the 1990 original that acted as a precursor to the Heroes of Might and Magic franchise, King’s Bounty is a strategy-RPG with a number of mechanics borrowed from other games – turn-based battles, character classes, skill trees – that nonetheless manages to feel wholly unique. It has enough flavor to let you take a zombie for your wife, but it occasionally proves ignorant of some common-sense rules of how to make a game fun.

For starters, the King’s Bounty has almost no structure. After you choose a class (Warrior, Mage or Paladin) and graduate from the training dungeon, the colorful land of Calradia is effectively yours to explore. From the opening continent there are dozens of quests available to you, and the game offers little guidance on what to do first. That could be a good or bad thing, depending on your personality – adventurous gamers will be occupied for hours, but others might quickly find their quest log taking up half their monitor and, without any sort of quest tracking built into the interface, feel bewildered and lost.

I was definitely in the “bewildered and lost” category for much of my stay in Calradia. That wasn’t because of my overpopulated quest log, though: King’s Bounty is a satisfyingly deep game, but it’s horribly inaccessible. Turn-based battles on a hexagonal grid might not sound that complex, but factor in managing your character’s skills (which you assign through a Diablo II-esque skill tree), dozens of different unit types with special attributes and abilities, randomly generated battlefields and enemy encounters, and you’ll quickly find you’re hitting the quick load hotkey much more often than you are the attack command.

Randomness is a huge issue, because the game will often populate an area with enemies far beyond your means. Getting my zombie wife was no stroll in the park. The path leading to the NPC I needed to find to complete the quest was blocked by a spider that I wasn’t nearly powerful enough to defeat. Experience trickles down at a snail’s pace, and I needed experience to get more troops, so I couldn’t just grind it out to get stronger. Besides, I’d heard that the zombie wife was a highlight of the opening area of the game – why should there be a random artificial wall blocking me from my true undead love? I ended up awkwardly luring the spider out and dodging it. For a game that’s all about the combat, shouldn’t avoiding fights be the last thing I want to do? 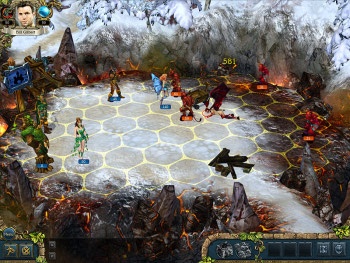 Unpredictability often works to a game’s advantage, but only when it has sensible bounds and when the basics of the game are explained. King’s Bounty is willfully obtuse: None of the gameplay terminology is defined, and the game’s tutorial is little more than a practice session for pointing and clicking. Not once does it even mention the essential fact that you can right-click on any enemy to see its stats and difficulty level, a skill that would’ve saved me hours of wasted attempts on impossibly powerful enemies.

Nevertheless, if the idea of the game – open-world fantasy RPG with super strategic battles – sounds enticing to you, fear not. In spite of its incoherent presentation, King’s Bounty is, at its core, a nicely balanced melange of RPG-style character building and strategic military planning. Once King’s Bounty clicks – sometime between when your army of archers gets swallowed whole by a horde of rainbow-scaled angler fish and when you finally recruit those angler fish and unleash their marine fury on a mob of grizzly bears – it’s beautifully strategic, a joy to watch and, for the most part, a blast to play.

It’s easily one of the quirkiest and most playful games in recent memory. When the battles were endlessly frustrating, the quest scenarios always kept me playing. They’re wonderfully subversive of the way we’re trained to play games – a quest where my Paladin had to exterminate some evil plants led to a conversation with a talking Venus Flytrap where I could choose to be violent or listen to its pleas. Despite the fact that I named my character Sarah Palindin, I decided to negotiate without preconditions. It turned out the plants were just grumpy because their soil lacked nutrients; I just had to acquire a cow and give it to Mr. Little Shop of Horrors as a living fertilizer machine. Quest completed.

King’s Bounty is a hard nut to crack. There’s certainly a meaty game with a unique flavor at its core once you’ve broken through the game’s layers of incoherence and bewildering maze of content. The question, then, is whether or not you’re willing to teach yourself the confusing language of King’s Bounty to enjoy it. Or, more importantly, how much do you want to have a virtual zombie wife?

Recommendation: Adventurous gamers or RPG fans with Heroes of Might and Magic experience should enlist; anyone else should try the demo first.

FCC Says Online Games A Leading Cause of College Dropouts