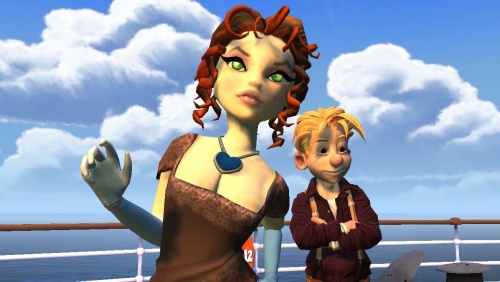 I’m going to level with you, Box Office Bust is a very bad game. Thankfully, I only rented it, because if I’d paid full price for it, I’d feel enormously cheated. Hell, if it had been given to me for free, I’d still feel like I’d gotten a pretty raw deal.

Uncle Larry ropes Larry the younger into uncovering a mole currently employed at his studio. While attempting his detective pipe dreams, Larry also has the chance to score with some hot chicks – although these hot chicks are so grotesquely designed that it’s a rather unappealing idea. At its very best, the game is plain boring and at its worse, it’s downright appalling – and not in some hyperbolic, literary sense. I was literally appalled by it.

The core gameplay is so inexpertly handled it’s difficult to believe that it was actually created by professionals. The game uses the Unreal engine, and either it’s not a great fit for open world platforming or Team 17 didn’t know what they’re doing, as the relatively empty lot still suffers from a very choppy frame rate. You’ll spend a lot of time performing fetch quests for the various characters inhabiting the lot, with an occasional quick time event or puzzle to break up the tedium, albeit with a different flavor of tedium.

Every now and then you’ll leave the studio lot and enter a “dreamscape,” which is apparently code for “an assortment of clumsily lampooned movie references.” The dreamscapes add a little variety to an otherwise trite gaming experience, and are where you’ll find most of the mini-games. However, shooting enemies from the back of a moving vehicle was an old idea ten years ago, and it doesn’t get any fresher here.

Larry’s movements are also dated, especially when comparing them to other recently released games. While games like Assassin’s Creed and Prototype are experimenting with parkour and free-running, Box Office Bust is just coming to terms with the double jump. The lackluster gameplay isn’t helped by a counter-intuitive camera system, either. When you’re outside, you can move the camera freely, except for when you can’t; when you’re inside, the camera is fixed in place, except when it isn’t. 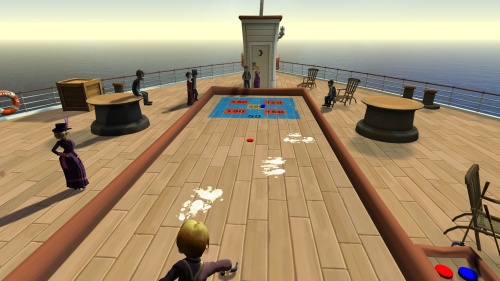 The only consistent thing about the camera is that when it does manage to fix into place, it is invariably in the least helpful place you can think of. This often means that you’ll go hurtling into the abyss because you couldn’t tell if there was ground under your feet or because the next ledge you need to jump to was almost completely off screen. It doesn’t help that the game’s checkpoints are spaced a little too far apart, so should you fail an objective, and the sub-par design makes that almost guaranteed, giving it another go will usually involve having to repeat the task before it as well.

However, it’s the writing that really damns this game. Box Office Bust aims for the same kind of tongue-in-cheek, fourth-wall breaking humor that made games like Monkey Island and the previous Leisure Suit Larry’s so popular, but fails to capture any of their wit or charm. Sometimes Larry will mock gameplay element as boring, repetitive or derivative, which is all very post modern, but it falls flat and it only draws further attention to the game’s many failings.

The writers have more ambition than talent and the dialogue is the worst kind of juvenile, sex-obsessed garbage you could imagine. Subtlety is set aside for a flagrant mix of sexism, misogyny, causal racism and flaccid, dated, satire. Box Office Bust does an excellent job of making every character repulsive, including Larry, who I think you’re supposed to like, although why you would escapes me. It’s telling that the developers are so desperate to get laughs that they make jokes about the Holocaust, which is about as low-brow as you can get. I can’t believe they actually found any voice actors willing to say this stuff, let alone people that you’ve actually heard of.

Bottom Line: Avoid this like the plague. Even if you see it in the bargain bin, save yourself the dollar and buy some candy, you’ll get much more enjoyment out of it.

Logan Westbrook is old enough to remember when Leisure Suit Larry was funny.