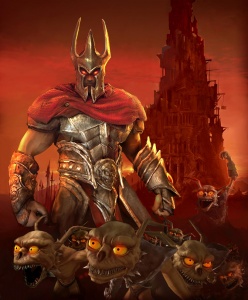 Very few days go by in which I don’t say to myself, “Holy mother of crap, it’d sure be nice to have a horde of screaming minions at my side … and be evil.” So naturally, Overlord appealed to me from the outset.

Developed by Triumph and published by Codemasters – one you may not have heard of, and another you may have learned through trial and error to avoid at all costs – Overlord nonetheless has all the trappings of a game of the year title, as selected by people who think games should be fun first, engaging second and meaningful only of there’s room left over. Which, admittedly, is not usually The Escapist‘s bag, but there’s something special about sarcasm that breaks all barriers.

After playing about a dozen high fantasy games, full of orcs, elves and dwarves; watching twice as many movies of the same ilk; and reading twice as many books, a game in which one of your first missions is to raid a hobbit village, send your teeming horde of minions through the little hobbit holes, set fire to Bag End and slaughter the unwary little bastards as their high-pitched cries for help fade on the wind opens up a whole new place in your heart. Or, if you regularly read The Onion, spend time at Something Awful or played the crap out of TIE Fighter back in the day, reopens and airs out the spare room where you enjoy such pleasure, invites you back inside and makes tea.

While it may take a palate slightly elevated from that of the lowest common denominator to truly savor the irony of turning the standard rules of fantasy on their end and, in effect, gallivant around in Tolkein’s world as Sauron, Overlord is nevertheless one of those rare games almost everyone would enjoy. To be fair, it’s not an everyday game, but when the stars align and your mood and that of the game are in sync, it’s the best game in the world.

Overlord begins as you’ve been summoned from some great beyond to reoccupy the throne of ultimate evil, which has laid empty since a fellowship of heroes sacked your evil tower. Your quest is to find these heroes and kill them. The catch? You might discover they’re more evil than you are. As is traditional for Xbox 360 games, Overlord offers a number of Achievements, one of which awards you points for finishing the game with a corruption level of zero, meaning you’ve been nice to your followers and haven’t killed indiscriminately. And while this may sound like the kind of game that makes you think a little more than you might care to, Overlord doesn’t hit you over the head with its nonlinearity. It’s just there. You can play how you want. Big deal. Go kill some hobbits. 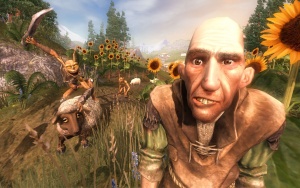 To exert your evil influence, you’re initially given one of four breeds of minions (brown), a forge in which to build weapons and a few magic powers. Exploring Overlord‘s vast world will reveal more minions (red, green and blue), more magic powers and statues that extend your life and magic bars. You will also find money, which you can use to decorate your evil tower; new forges, which allow you to make stronger weapons and armor; and a mistress, who only tells you what to do and occasionally invites you to bed.

The meat of the game is in the slaughtering. Each race of minions has individual strengths and weaknesses, and once you’ve acquired a healthy number of them you can effectively rampage across the countryside, sending them out ahead of you like a team of forward linemen, blocking your enemies and killing them while they’re at it. Collecting the “lifeforce” of various creatures throughout the land (including humans) allows you to summon more minions. Chasing flocks of sheep with a horde of brown minions, or setting them on fire with the Reds (flaming sheep!), is one of the most fun things I’ve ever done in a game, and, since it’s the only way to acquire more browns, it’s useful to boot.

There’s linearity to the game, which both saves it from becoming boring boredom and makes it seem as if the game is longer than it actually is. Although, in spite of the seeming vastness and a clunky save system, the game is surprisingly playable. Few of the game’s enemies (even the bosses) are truly difficult, and only the dwarves (nasty, drunken gear heads with giant axes, flamethrowers and bombs) gave me controller throwing fits. Still, at each encounter there were at least two ways to go about my business, and with a full compliment of minions, the number of strategies one can employ are staggering. I won’t go so far as to say this makes for built-in re-playability, but the initial play was the better because I was able to play as I chose and not be railed into the developer’s Intended Method of problem solving, proving that even within a linear game it’s possible to create scenarios that allow for actual choice.

A lot has been said about games offering choice, but few actually do. Overlord won’t change the world, or even invent a genre, perhaps, but at a time when too many games are busy chasing the shadows of greater games or trying too hard to offer gamers something they only think they want, a game that does almost everything right and offers more fun than frustration, with wit, charm and humor to boot, comes as a breath of fresh air.

Overlord gets a score deduction for having no other choice but to abscond with manual camera control (the right thumb stick controls your minions) and for a needlessly repetitive section toward the endgame (I remember all the places I’ve been, I don’t need to fight the same frustrating boss enemy more than once in each place, thank you), but were I to assign numbers to my reviews, Overlord would still be looking at double digits.

Russ Pitts is an Associate Editor for The Escapist. His blog can be found at www.falsegravity.com.