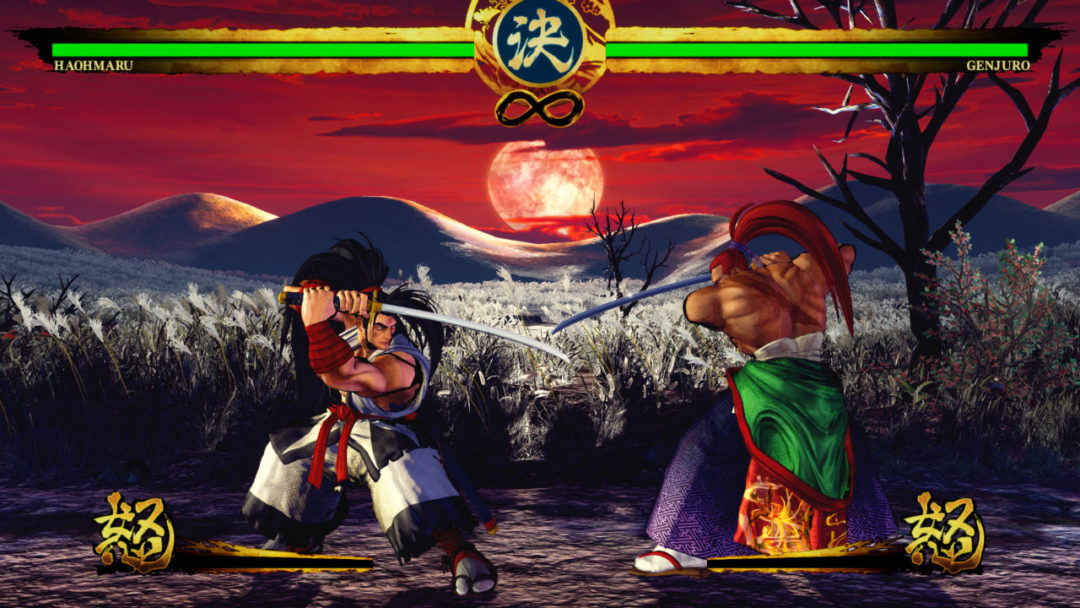 SNK’s Samurai Shodown is both an act of worship and discipline. The canonized developer and publishing house behind The King of Fighters and the classic Samurai Shodown brawlers is now decades out from its ‘90s heyday, when it defined the genre as much as Street Fighter creator Capcom. Playing this new Samurai Shodown, you can tell SNK remains committed to a classical ideal. The developer has been on a warrior’s pilgrimage, a musha shugyo if you’re nasty (and a Japanese history buff) to hone both martial skills and spiritual harmony.

The result is a depiction of Edo-era Japan and its colorful fighters that’s far more romantic than the reality it mines. Every medieval warrior period sucked, guys. Blood and death and misery heaped upon the poor were as awful during the reign of the samurai as they were during Europe’s Dark Ages with all those sweet-looking knights and during the American Western expansion. But the ugly truth of cowboys, samurai, and knights can never dull the seductive tactility of those periods.

I’m as susceptible to their charms as the next guy raised on Usagi Yojimbo comics and Kurosawa films. Wandering the land as a shugyosha on his pilgrimage, blade never leaving its scabbard unless it’s absolutely necessary, standing on some windswept cliff listening to waves swell, crest, and crash beneath a harvest moon. Hell. Yes. SNK’s Samurai Shodown — a physical manifestation of this fantasy brushed in generous strokes of lurid art and concise, clear combat — is mesmerizing. Playing it feels like living through my personal daydream pilgrimage and the culmination of SNK’s own musha shugyo. This beautiful game feels like the warrior returned, his blade sharpened and polished to an impossible sheen.

Samurai Shodown may seem spare compared to its contemporaries like Mortal Kombat 11. There is no boundless succession of unlockable modes or even a whiff of marketing desperation to force this fighting game into becoming a Persistent eSport Community(™). In fact, Shodown feels even less adorned than recent efforts like Soulcalibur VI, that have worked hard to strip away the extraneous features meant to keep people spending money on fighting games well after they’ve been released. There are 16 characters, three of whom appear for the first time in the quarter century old series, and 12 stages.

This beautiful game feels like the warrior returned, his blade sharpened and polished to an impossible sheen.

There’s a story mode to play through that delivers several different endings but plays out similarly for each character; you always face off against the possessed Shizuka, a gloriously intimidating cross between a Heian-era princess and a monster from The Grudge. There’s also an online mode for both casual and ranked matches between real players, a tutorial, and a gauntlet where you can fight 100 AI opponents in a row. These have been staples of every home console fighting game since around the time Samurai Shodown VI, the last numbered sequel in the series, came out in 2005. There is one novel mode that lets you fight against “ghosts” of other real world players that are controlled by the computer based on the player’s behavior with certain characters. That’s neat, but it wasn’t discernibly different from a computer when I played it pre-release. To anyone weaned on the amalgamated products full of unlockable costumes and limited-time events that make up the genre today, Samurai Shodown may feel like the anti-fighting game. The value-obsessed player may balk at its austerity. Is this it?

What they’re missing is that SNK’s clarity reveals its peers as the real antitheses of a pure fighting game. Taking control of Haohmaru — the series mascot based on real world samurai Miyamoto Musashi, whose own musha shugyo has been fictionalized over and over for hundreds of years — it took me a moment to adjust to Samurai Shodown’s genteel simplicity. This is a game about people fighting with spears, rapiers, and swords (or in the case of newcomer Yashamaru seven swords). Despite the game’s vibrant anime presentation, its weapons are convincingly precise. You can strike a light, medium, or heavy blow with your weapon, kick, and jump; everything else is a variation of those simple moves. Rather than memorizing massive chains of button inputs, Samurai Shodown demands you patiently focus on timing simple, impactful blows.

Each of the 16 characters feels so distinct from one another, their movements so fluidly animated and easy to understand in conjunction with what buttons I actually pressed on the controller, I found myself ensconced in the deeper strategy of the game more than I have with any other fighting game in decades. Pirate queen Darli — a spectacular new cast member looking like a refugee from the Coney Island Mermaid Parade — slowly arcs her massive saw-like blade, leaving her vulnerable to speedy close quarters fighters like ninja Shiki. Kyoshiro, a crazed Kabuki actor and spearman, can clear huge distances fast, but is susceptible to rogues Galford and Nakoruru, who actually have pets that can attack. I’d be bitter about how hard they are to fight if it wasn’t rad as hell that they attack you with ninja dogs and trained hawks, respectively. Tam Tam, a hulking Aztec swordsman perpetually crouched on screen, is convincingly massive but wholly different than the lumbering Earthquake or broad-shouldered Jubei. Each of them can feel ponderously slow compared to most video game characters in 2019, but like some hard-bitten duelist in a yellowed Lone Wolf and Cub manga, they explode into action once you settle into Samurai Shodown’s easy rhythm.

SNK has also perfectly married the classic hand drawn look of its ‘90s work with the 3D graphics technology they struggled to acclimate to at the beginning of the 21st century. There’s a lush vibrancy to each scene — bright, blue-skyed beaches, bustling schooners, a painted kabuki stage and, naturally, a moonlit open field of reeds rustling in an immortal breeze — absent in the creative team’s last two games The King of Fighters XIV and SNK Heroines: Tag Team Frenzy, or even similarly drawn peers like Capcom’s Street Fighter V. Some stages are peppered with wildlife, and it’s weird to fight over a beautiful autumn scene only to spot some rough-shod bear that looks like an escapee from an early ‘10s Taiwanese news broadcast. But those slight blemishes only add to the game’s painterly disposition.

I’m distrustful of any follow-ups that reuse the original’s name. There’s an inherent mercenary quality to trading on an old title to try and lure in people who might recognize it and remember the good old days. In the age of undying media, when everything is recycled forever to keep an overwhelmed audience committed, sometimes even good work has to be mercenary. In calling its new game simply Samurai Shodown, SNK has made an honest declaration rather than a crass attempt to curry favor. This game is not a Samurai Shodown remake, nor is it truly a soft reboot. It is an old warrior returned after years of pilgrimage, its name newly earned and seasoned, its skills acuminated to a point so fine it’s invisible to the naked eye.

Xbox Cuts Back to One Next-Gen Console