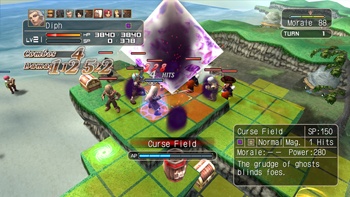 Strategy games and I have a shaky history. It’s the micromanagement of resources really; I do not find that particular mechanic fun at all. Classics of the genre like Command and Conquer, StarCraft, and The Sims have continually failed to entice and engage me in any kind of extended play. That being said, I should note that one my favorite role-playing games is Vandal Hearts; a great combination of strategy, role-playing, and intricate storytelling, the game rocked my 16-year-old socks off. I did not expect an on-par playing experience from the recently-released Spectral Force 3, but I was optimistic for something similar or at least as intricate a story-telling experience.

Sometimes the horrible aspects of the game even contribute to moments of undiluted fun. One of the worst, and I use this term loosely, features of the game is the English translation of the story, which is then doubly hampered by (should really be “boosted by”) the deplorable voice-acting. It’s that terrible. The story makes no sense, so little sense in fact that I am inclined to believe it would not even make sense if I could read and understand the story in its original Japanese. Regardless of whether or not this rambling narrative makes any sense, it’s the voice-acting that sells it. If characters aren’t completely wooden, they’re hilariously over the top. But the kicker is the sound effects.

Before the first (tutorial) battle, the party encounters gigantic insects and some floating puffer fish, a Jigglypuff amalgam. It’s quite terrifying. Really. The bees make a buzzing noise (obviously) and the “Jiggly-puffer” makes some kind of odd throaty noise, but these noises aren’t made by sound effects technicians –they made by actors. An actor says “buzz” while holding out the ‘z’ like a child would when imitating a bumblebee. Some other actor kind of rumbles or clears his throat or does something to produce some god-awful noise that a professional sound editor thought would be a good idea to include in a not-budget-priced-title. I can’t complain too much though, as it gave me the best laugh I’d had all week.

At this point I was actually (as bad as the voice-acting was, it kept the tone of the game light and fun) excited to play this game. My hopes were that it would turn out to be an unappreciated gem. 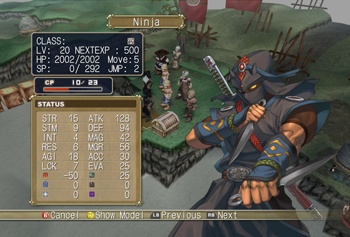 I can’t even point out where I realized my hopes would not come to fruition nor can I even say they were dashed. That’s the essential, boiled-down-to-its-bare-bones conflict with playing Spectral Force 3.

The strategy, on the whole, is not very strategic. Keep the weak healers in the back so they won’t get killed and not heal you, and be sure not to encounter too many enemies at once for fear of being overwhelmed. Follow these simple rules and you will do well. Equipment, at least, requires a somewhat strategic mind. You will come across many useful, stat-boosting items in their travels, but the weight restrictions for each character are fairly low, forcing you to triage equipment and judiciously decide what would be good for each character and the overall strengths of your party.

Because there’s not a lot of strategy necessary while in the midst of the actual battle, how fun a particular level or map (of which there are over 100, laid out in grids with limited amounts of movement turns allowed to the player at any given moment just like any other strategy-RPG that’s been released) is almost entirely dependent on the type of enemies present as well as the environment’s overall layout and design. Some maps have many treasure chests that can be sought out by adventurous players while avoiding dangerous dark knights, while other levels yield little for the exploration-inclined player and offer nothing but easily defeated stock monsters by way of combat.

For every good gameplay aspect presented in Spectral Force 3, there’s something equally bad to provide a counter balance. Of course, not all of the terrible aspects of this game are bad; the aforementioned voice acting, for example, is too much fun. The graphics are simply bland, neither adding to the excitement and fun nor detracting from it in any meaningful way. On and on it goes with Spectral Force 3: no one aspect rising above the mediocrity of the game to provide a defining gameplay experience but never being terrible enough to completely bore or turn a player off.

Bottom Line: An adequate gaming experience at 20 or maybe even 30 dollars; 60 dollars may be a bit expensive for this much mediocrity. Not one single aspect stands out and defines the game.

Recommendation: Fans of strategy RPGs will find nothing new here, but it’s definitely a niche title and not one to write off completely. Rent it or pick it up cheap.

Matthew Olcese has obsessive completionist tendencies while playing most role-playing games. His wife hates him for it.