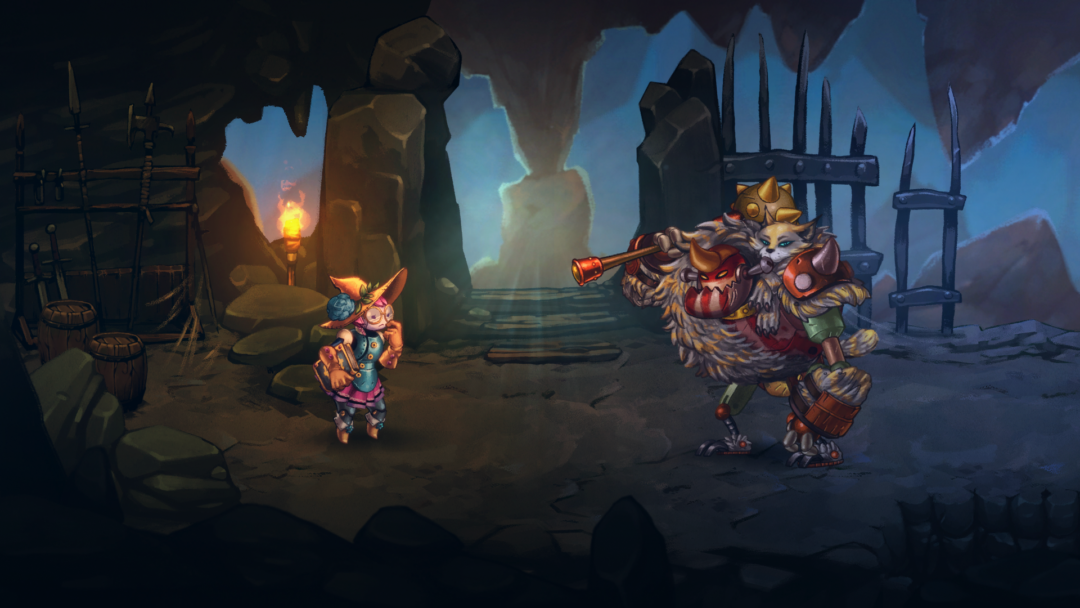 About two-thirds of the way through SteamWorld Quest: Hand of Gilgamech, its party of misfit robot heroes thinks they’re on the verge of recovering the game’s MacGuffin. Adorably geeky alchemist Copernica encourages everyone to come up with a plan of attack, and the impulsive knight Armilly pulls a Leeroy Jenkins, running off screen. From there, Armilly shouts back asking for a description of the magical relic, kicking off an Abbot & Costello-esque routine where the stoic samurai Orik describes the Necronomicog and Armilly describes what she’s encountered, which is obviously something entirely different. The extended gag ends with Armilly summing things up. The bad news is that the group’s going to have to keep looking for the Necronomicog. The good news is that they’re going to get to fight another dragon.

That scene sums up everything great about SteamWorld Quest, the first roleplaying game in Image & Form Games’ SteamWorld series. It’s extremely goofy and good-natured, populated by characters who are a delight to spend time with and combats worth getting excited about. Those play out through collectible card game mechanics, with each character having an eight-card deck that you build and customize throughout the game. The decks belonging to each of your three active characters are shuffled together, randomizing what you’re capable of when. Cards are also divided into a upgrades and basic attacks that give you gears, and more powerful moves that cost those same resources.

The result is an extremely satisfying and fiddly system that rewards experimentation and tailoring decks and party composition based on each level’s opponents. It’s important to strike the right balance between cards. If you have too few free cards, you’ll get stuck with hands full of spells you don’t have the resources to play. But those powerful cards are necessary to heal, dispel nasty status effects, and do damage to multiple opponents to keep your party from getting overwhelmed. You have a six card hand, and every turn you get to choose to discard up to two cards to draw new ones. That mechanic requires its own set of strategies. Do you discard healing effects or expensive spells because they’re not useful at the moment or hold them for fear you won’t have them in hand when they’re needed? An incapacitated character can’t play cards, but should you just discard their cards or hold them for a strong turn when you can get them back in the game?

Along with forcing strategic decisions the cards also help develop each character’s personality. Armilly can buff and heal herself with cards like Aspiring Hero and Bravado while the streetwise orphans Tarah and Thanyne share their evasiveness with the group through the card Against All Odds and can even use Sleight of Hand to slide a bad card into an opponent’s deck. The game often deals out new cards at key plot moments which makes it feel like the characters are growing in power and complexity as the story goes on.

Adding even more to the complexity is the fact that you gain powerful kicker effects when the same character plays three cards in the same turn. Meanwhile, some cards have bonus effects if a specific different character also played a card that turn. There are also numerous cards that change these base rules by letting you play, draw, or exchange extra cards. All of that comes on top of standard RPG considerations like wanting to hit opponents with attack types they’re weak against and balancing your gear between offensive power and protection.

It’s hard to stay frustrated with something this lovable.

The variety of cards allows most characters to be sculpted into various roles based on what you need. For instance the cantankerous frogman Galleo is undoubtedly the game’s best healer, but he can also become a tank dishing out big hits. Most cards are crafted with the help of a merchant who follows your party wherever it goes, no matter how improbable the location, but some can only be found in treasure chests scattered across the game’s labyrinthine levels, which makes thoroughly exploring a necessity rather than just an activity for completionists. Each chapter lets you know how many of the hidden goodies you managed to get after you beat it and my outcomes were often embarrassingly low on the first pass. After struggling against the first boss, I retraced my path and in addition to doing some power leveling was able to locate Galleo’s Regeneration spell, which became a staple of his deck for the rest of the game.

As complex as the system is, I felt constrained by the small deck size and wished Image & Form had let me tweak it. Expanding beyond eight cards would make players really consider how many copies of each card they wanted in their deck and which effects were worth having just on the chance they’d be useful. There were plenty of cards I wanted to use but just couldn’t justify devoting a slot too with such tight constraints. That would be balanced against the risk that you won’t see a card you really need for several turns because of your oversized deck. But players who are less enamored with CCGs likely won’t share those frustrations. Still, SteamWorld Quest has some bigger flaws. The AI is depressingly dumb with enemies often wasting turns healing when they’re at near full health, a system meant to let you sneak up on opponents is frustratingly clumsy and vague about where exactly you need to be to trigger and ambush, and fights can turn into a slog where the outcome is clear but you still need to spend round after round dealing enough damage to bring the bad guys down.

It’s hard to stay frustrated with something this lovable, though. At one point I was infuriated about the difficulty of navigating a level that always seemed to lead me back to the same place, but when I realized that I was dealing with a riddle rather than a maze the rage was quickly overtaken by delight. I rolled my eyes at the laziness of a late game sequence that forced the heroes to do battle against a series of previously defeated bosses, but the humorous payoff at the end was well worth the repeated fights. The animations are basic but adorable, particularly the wide-eyed expression the foxlike Orik is prone to and everything involving the tough, ax-wielding Tarah and her little brother, Thayne, who peeks out from hiding behind her back to attack enemies with a dagger and dark magic.

Add in some surprisingly good plot twists and emotional arcs and SteamWorld Quest is a game that storied RPG developers like Atlus and Square Enix could be proud of. The fact that this is Image & Form’s first outing in the genre begs the question of what exciting adventure the developers will rush headlong into next.