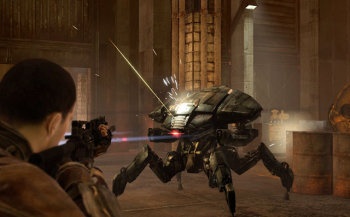 This is gonna sound crazy, but … I’ve come from the future. Yes, that’s why I’m typing this naked. Listen carefully: Do not – I repeat, do not – purchase the Terminator Salvation videogame when it’s released worldwide. There’s no fate but what we make for ourselves, and to commit such an act would doom future generations to decades of ignominy and … what’s that? The game’s been out for months already? Aw, fudgesticks. Stupid time machine was supposed to resubstantiate me on May 4, 2009, not September 2. Curse your metal body, Skynet!

OK, so I’m not really from the future. And in a world that doesn’t lack licensed videogames hurriedly cobbled together to turn a quick buck, it might seem unfair to specifically target Terminator Salvation. The Christian Bale metalfest underperformed at the U.S. box office, so it’s unlikely that a legion of fresh-faced franchise acolytes were clamoring to experience the companion game; copies are probably already landing in bargain bins with a dejected clang. And with its Swedish developer, Grin, shutting up shop, isn’t it just being vindictive, kicking them when they’re down? Perhaps. But this stuff is important. In a rare non-action scene in the movie, we’re told a vital difference between us humans and the machines is that “we bury our dead.” So consider this an autopsy.

Perhaps the most irritating thing about Terminator Salvation is that there’s actually nothing inherently wrong with it from a corporate point of view. If you’re hired to produce a licensed game in a pressurized timeframe, it makes sense not to get too ambitious. Sketch out a modest design document using familiar gaming tropes. Set tight development milestone markers. Above all: manage expectations. With these directives in mind, the Terminator Salvation to-do list could be sketched on the back of a napkin. Third-person duck-and-cover gameplay cribbed from Gears Of War. A self-contained nine-chapter story set before the events of the movie. Limited enemy types. Some inevitable on-rails shooting sections. A nominally climactic assault piloting a giant Hunter-Killer tank. The game never feels like it’s over-reaching, which presumably allowed it to be completed, approved and shipped in good time. It’s just all so … soulless. The main menu screen even features a picture of the automated T-800 production line that, as you mechanically progress, starts to feel increasingly like a curdled in-joke. 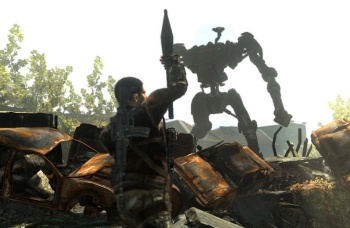 The limited parameters of Terminator Salvation wouldn’t be so depressing if the game was, y’know, fun. Any pleasure at the familiarity of the controls – you’ll instinctively be shooting, reloading and ducking behind convenient points of waist-high cover ¬¬- fades as your muscle memory recalls countless superior third-person shooters. In terms of weaponry, setting and mechanics, there is nothing original here. As John Connor (not modeled on Bale, although the replacement voice actor does sometimes attempt an impression), you’re funneled through a procession of shattered cityscapes, always with at least one squad member tagging along. The majority of your cybernetic foes can only be immobilized by shooting them in the back of the head, so the game constantly urges you to flank targets. Since the baddies prioritize shooting the supposed savior of humanity, it’s easy to draw their fire, allowing your teammates an easy killshot. Unfortunately, they never seem inclined to take it. No wonder future John Connor’s so grumpy – it genuinely feels like has to do everything himself. (There is an offline split-screen co-op mode that allows for some tactical play, but it feels like an unpolished, last-minute addition.)

On the medium difficulty setting, you can trundle through the game in around five hours, grimacing for most of them. Movie stars Moon Bloodgood and Common are along for the ride (as is Rose McGowan, even though she isn’t in the actual film). As the credits rolled, I found myself wishing that some of the budget earmarked for voice talent had been put into developing a few more levels, or an innovative gameplay mechanic or … something. As it stands, the most memorable thing about the game is the loading screen: a beautiful, burnished rendering of the iconic Terminator skull that you can rotate while you wait, the better to stare right into those glowing red eyes. Unfortunately, you see this loading screen a lot. After a while, you convince yourself that the metallic death’s head is silently mocking you.

As a cheaper downloadable game – perhaps along the lines of Watchmen: The End Is Nigh – Terminator Salvation would just about cut it. As a full-price release, though, it’s a backhanded slap in the face of gamers, and a depressing reminder that licensed shovelware can be as unstoppable as a killer robot. With such evocative source material, there’s still a decent Terminator game to be made someday – the original movie hints that John Connor is some kind of tactical genius, so would an RTS be too much of a leap? Managing dwindling resources in the face of a ruthless A.I. enemy, attempting to bring the fight to their doorstep? Terminator Insurgency has a certain snap to it.

If only my fictional time-travel apparatus had been more accurate, I might have been able to warn some of those tortured souls who’ve already purchased and played Terminator Salvation. Still, all is not lost. I can still deliver a vital message about G.I. Joe: The Rise Of Cobra: The Game. Listen carefully …

Bottom Line: There’s an important difference between fulfilling a contract and doing right by fans. Even if you enjoyed the tin-can pandemonium of the movie, this crass tie-in isn’t worth your time.

Recommendation: Don’t be back.

This review is based on the PS3 version.

DSi-Only Titles Coming in the Fall