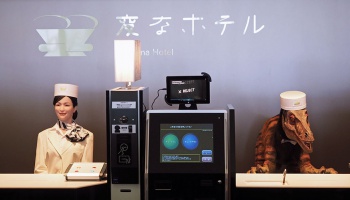 Welcome to the Henn Na Hotel, where robots will check you in, take your luggage, and bring you room service – if the velociraptor concierge doesn’t eat you first.

Usually a phrase such as, “at Japan’s newest hotel,” is going to be closely followed by a phrase like, “a robot velociraptor concierge will check you in.” Today is no exception, because Japan’s latest amazing hotel does feature a robot velociraptor. In fact, the Henn Na Hotel (or “Weird Hotel” in English) is staffed entirely by robots.

That’s right – every aspect of the guest’s stay will be handled by a robot, from check-in to check-out. Let me take you on a walkthrough of a typical stay at the Henn Na.

First, you will need to check in. At the front desk you will meet Actroid, an android modelled on a human woman. She will answer simple questions and explain how you check in. Her coworker, a nameless velociraptor in a bow tie and hat, can also help out – though owners say the dinosaur is less advance than Actroid. Eventually, they hope, all the robots will be connected to the cloud and their software and language skills can be updated over time.

Once you’ve checked in, you’ll need to bring your luggage up to your room, which is where the porter robots come in. Programmed by swiping your keycard, you can load these bots up and follow them to your suite. The hotel is designed to be easily navigated by both humans and robots, so wide hallways and slopes abound, giving your porter bot a break.

In your room, you will meet Nao, a dancing robot who will explain the hotel in both English and Japanese, in case you have not yet figured out you are in a hotel run by robots. Nao has been in the news quite a bit, recently.

By your bedside is Chu-ri-chan, the hotel’s adorable mascot. She will act as your liaison with the room itself – through her, you can activate the lights, set up a wake-up call, and check the temperature.

Walk around the halls and you will meet plenty of wandering bots. Some give information about local attractions; others might be room service bots delivering meals or towels to other patrons.

We may not know yet whether America or Japan has the tougher robot, but I think we know who’s got the strangest hotel.

Hotel owners insist there is no chance a “Five Nights at Freddy’s Situation will happen.” Furthermore, they deny that the attraction is actually a fully realized crossover between the horror game franchise and Jurassic Park.

Actually, now that I think of it, maybe Jurassic Park is a “Five Nights at Freddy’s” situation. After all, most of the dinos were animatronic, there’s a big to-do about getting the power back on so you can lock the doors…

Back on topic, though, what other great ways can this go terribly wrong? The Shining 2: Japanese Robot Mayhem?

Devil’s Third Is Coming Stateside on Wii U And PC