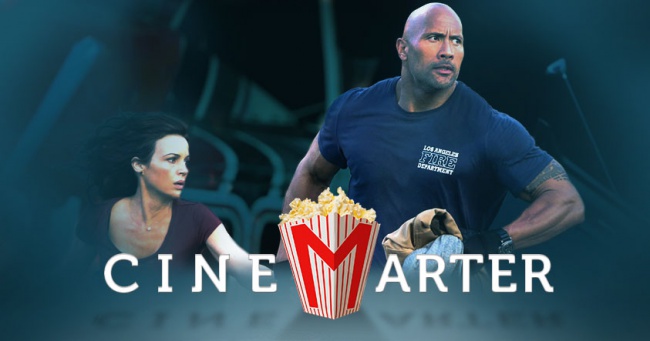 Essentially Earthquake, but set in 2015, San Andreas is a disaster movie in which a series of earthquakes go off, destroying much of California in the process. The disaster happens Roland Emmerich-style, with big set-piece CGI scenes depicting all of the destruction, and the film follows three different groups as the earthquakes strike. If you’ve seen 2012, and you wanted a shorter, more focused version of that, then San Andreas is your movie.

The three groups are as follows: (1) Ray (Dwayne Johnson), a rescue-helicopter pilot, and his estranged wife, Emma (Carla Gugino), who head from Los Angeles to San Francisco to rescue their daughter, Blake (Alexandra Daddario). (2) Blake and a couple of tourists, Ben (Hugo Johnstone-Burt) and Ollie (Art Parkinson) try to find high ground while waiting to be rescued. (3) Lawrence (Paul Giamatti), a Caltech professor, finds a way to predict earthquakes and then, with the help of a reporter (Archie Panjabi), tries to warn everyone about the impending disaster. If you want to include a fourth group, it would be the numerous explosions, falling buildings, crashing waves, and other ways to destroy things – most of which are accomplished with pretty decent CGI. 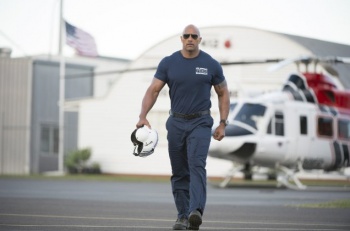 San Andreas doesn’t shy away from its fair share of genre clichés. Just some of them include: the “new” guy (Ioan Gruffudd) turning out to be a bit of a jerk; the disaster bringing the main family closer together; millions of lives being lost and ignored because, if they’re not part of the main cast, they don’t matter. Seriously, outside of a couple of brief moments, Ray winds up ignoring the pleas for help of a ton of people, instead focusing on his singular mission. The idea is that we are given a family to root for and give us hope.

The problem with that is that none of the characters are particularly interesting. Ray and Emma lost their other daughter years ago, which is about the only characterization they’re given. Blake knows how to survive thanks to her father, but otherwise exists to be rescued. Ben is a love interest, Ollie is comic relief, and Lawrence is the one to deliver exposition. They fill stock roles and achieve little else. The dialogue is also hilariously bad, but those who love disaster movies are probably going to be pleased to hear that. These movies function more as guilty pleasures than as genuinely thrilling entertainment for a lot of people, and the bad dialogue is part of the joy.

For the most part, it’s an inoffensive way to waste a couple of hours while watching Dwayne Johnson do some fun action scenes and bearing witness to the complete annihilation of San Francisco.

San Andreas isn’t a terrible movie, though. For the most part, it’s an inoffensive way to waste a couple of hours – and thankfully no more than that – while watching Dwayne Johnson do some fun action scenes and bearing witness to the complete annihilation of San Francisco. I’m sure there’s someone out there who, at one point in time, felt wronged by the city, and for them, San Andreas will be a cathartic experience. I don’t know if I’ve seen a movie with so much of a focus on buildings blowing up and falling down. It makes you wonder what could have been had the filmmakers focused that much attention on the characters.

The repetitiveness and relentlessness with which San Andreas proceeds is another problem. It becomes draining by the end, when yet another earthquake – or aftershock; I’d lost track of which “stage” we were in – hits and the characters once again get thrown like ragdolls so The Rock can save them. It’s a formula that repeats itself too many times, and it’s tiresome after two hours. I’m happy Brad Peyton‘s film wasn’t stretched out to an unbearable length – I’m looking at you, 2012 – but it’s still far too long and repetitive to remain captivating for its entirety.

At least Dwayne Johnson is fun in the lead role. He’s usually up for any kind of silliness, and you don’t get a whole lot sillier than an Emmerich-style disaster movie. He delivers his cringeworthy dialogue as earnestly as one can, and looks distraught when talking about either of his daughters – before a scene later going into straight action-mode. It’s fun watching him go from one emotion to the next. He’s the only one who gets to have much fun, though. The females – Carla Gugino, Alexandra Daddario, and Archie Pahjabi – are all here to be eye candy – while the supporting males fill a single role and nothing more. It’s lazy, but what can you do? This is “Disaster Movie 101”; a parody of Roland Emmerich movies wouldn’t look a whole lot different from San Andreas, except everyone would be wearing googly eyes.

Recommendation: If you needed a more streamlined version of 2012, or just really hate San Francisco, then San Andreas is for you.