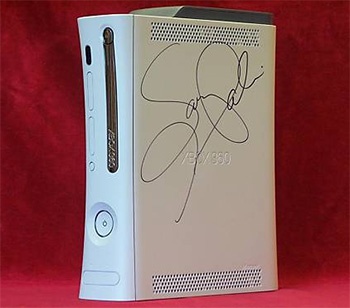 Proving once again that the scribbles of a celebrity instantly drive up the price of absolutely anything, a Canadian man is auctioning an Xbox 360 signed by former Alaska governor Sarah Palin. The starting bid? $1.1 million.

David Morrill of Vimy, Alberta, said he pushed to the front of the greeting line and asked Palin to sign the Xbox as proof he met her. It was “one of the greatest thrills of my life,” Morrill told the Journal.

Those of you who’ve spent more than five minutes on these here internets are probably rubbing your eyes and sighing loudly, wondering how anyone could actually believe the current $1.1 million bid is valid. The Daily News seems to agree with your assessment, saying Morrill “has received one anonymous bid for his Xbox. The bidder ID has just one “feedback” rating on eBay, and there’s no guarantee Morrill will get his money.”

Still, this eBay auction should serve as an interesting historical footnote when future humans are trying to describe the cult of personality that has built up around the former mayor of Wasilla — a town once described to me by a former paramour native to the icy village as “three million tons of snow, meth and angry moose.”

Then, of course, we started arguing about how to properly pluralize mooses (meese?) and that’s where the relationship fell apart.

Making Games More Than an Afterthought