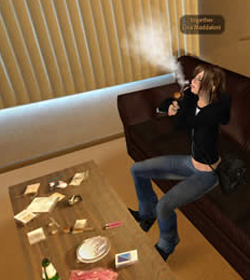 Second Life is now being used to evaluate how visual cues can affect a drug addict’s cravings.

People seem to keep on coming up with new, bizarre, and fascinating uses for Second Life. The latest, created by a UCLA PHD candidate, was to use the digital world to study how virtual drug paraphernalia would affect the cravings of a meth addict.

Chris Culbertson was inspired to create this experiment thanks to “reports of alcoholics and smokers developing cravings while visiting virtual worlds devised by addiction researchers.” So he created a virtual meth house and then invited seventeen meth addicts to navigate the construct while under observation at UCLA. Aside from filling out questionnaires while they proceeded through the house, the addicts’ heart rates were monitored to study their cravings.

Two of these houses were actually created. One was clean – serving as the control example – and one had a number of items designed to trigger the addicts’ cravings: “Visitors to the ‘meth apartment’ are served up visual cues such as ‘pipes, lighters, bags of meth, syringes, lines of meth,’ and audio clips, prompting them to ‘Click on the pipe if you want a hit.'”

I’m not sure how I actually feel about this experiment. On one hand, it’s useful to learn about how a person’s cravings are affected by visual cues like this. At the same time, speaking as someone who lost a relative to a serious drug addiction, it seems like the study has the possibility to harm the test subjects by tempting them to use again (provided, of course, that these individuals are trying to kick the habit in the first place).