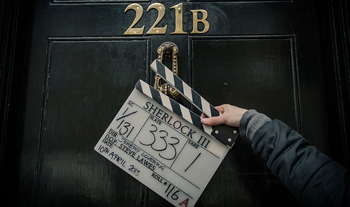 So many questions linger in the meantime.

The only consulting detective in the modern world is back in the BBC series Sherlock. The third season premieres for US audiences through PBS Masterpiece on Jan. 19 at 10 p.m. This is the first time the US premiere date was revealed before the reveal of the UK premiere date, but the BBC has rights to air the show first, meaning Sherlock will air in the UK before Jan. 19 10 p.m. EST.

By the time season 3 premieres, it will have been two years since the second season’s end and Sherlock’s great mystery of how he survived the fall. The delay in production is partly due to the busy schedules of Benedict Cumberbatch (Sherlock Holmes) and Martin Freeman (John Watson). Cumberbatch was kept busy as antagonist Khan in Star Trek: Into Darkness, and Freeman has his new role of Bilbo Baggins in the three-part The Hobbit movies, in which Cumberbatch provides the voice for the dragon Smaug.

“The first holdup was the boys, of course, and getting all of them together — not just Benedict and Martin but also [creators] Steve Moffat and Mark Gatiss,” Masterpiece executive producer Rebecca Eaton told Entertainment Weekly. Moffat and Gatiss also work on Doctor Who.

Production wrapped up in August. Eaton said scheduling for the show on BBC and PBS was hastened because of high fan interest. “This is about as quickly as we could have possibly got them on the air once they were made,” she said.

The US premiere for the first season of Sherlock came three months after the UK air date and four months for the second season’s air date. In May, Cumberbatch said in an interview at the premiere of Star Trek: Into Darkness he is working on a simultaneous release for the UK and the US, but it is unknown whether that will be the case.