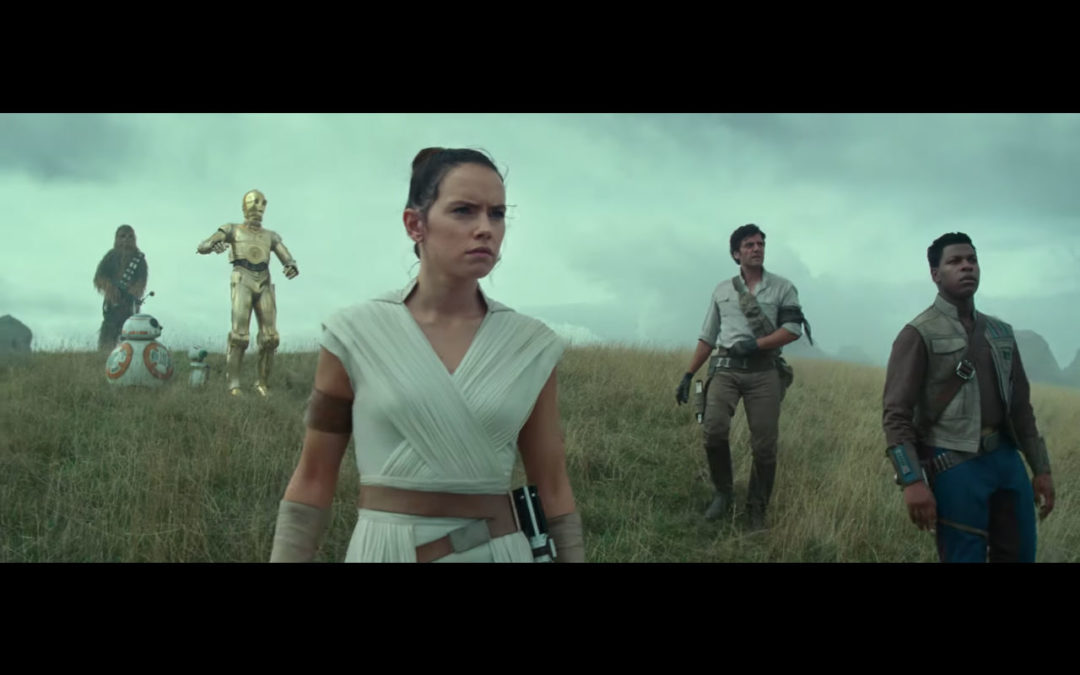 Seven years after Disney announced it would buy the omnipresent Star Wars series from George Lucas for a cool $4 billion, we have our first look at what the company swears is the final movie about the legendary Skywalker family of space wizards. Star Wars Episode IX may or may not actually be the last titled chapter in the saga that started all the way back in 1977 — we’ve heard it all before — but we do know what the final chapter of Rey, Finn and Poe’s trilogy is called.

Star Wars Episode IX: The Rise of Skywalker is out on December 20th, 2019.

In addition to those little snippets listed above, the trailer gives us tantalizing glimpses of the crew introduced in 2015’s Star Wars: The Force Awakens. Kylo Ren, the doomed son of Han Solo and General Leia Organa, is seen reforging the Darth Vader-style helmet he destroyed at the beginning of The Last Jedi. Crack pilot Poe Dameron and the eternally flustered C-3PO are seen fleeing a harried dog fight on a desert planet. We even get to see Lando Calrissian behind the controls of the Millenium Falcon, laughing with the same gusto he belted out after blowing up the Death Star back in Return of the Jedi. Finally, we get to see Rey and her adopted family overlooking what appears to be the wreckage of that lost battle station as the voice of Emperor Palpatine laughs ominously and Luke Skywalker intones: “No one’s ever really gone.”

I couldn’t be more excited. While many people in the world of pop culture adoration and dissection that Escapist is so deeply rooted in had issues with both The Force Awakens and The Last Jedi, I found them both to be smart, deeply affecting continuations of the Star Wars story. Both movies deftly explore what happens when life inevitably moves on from past victories and our heroes stumble, leaving room for new heroes to emerge. The Rise of Skywalker looks like it will continue to explore the series’ most prominent theme — how the sins of the past inform our present and shape our future — but from a perspective not mined in its previous two entries. We’ve seen how Luke Skywalker, Princess Leia, and Han Solo’s choices have affected the lives of the people that succeeded them, but what about the bad guys? Bring on that Palpatine force ghost, baby. Tell us what’s been operating in the shadows this whole time.

Beyond story, though, I’m also glad that The Rise of Skywalker will also put the entire Star Wars universe to rest on the big screen. Disney CEO Bob Iger confirmed that after Episode IX is out this year, Star Wars movies are going on break. “We will take a pause, some time, and reset,” Iger told Bloomberg Television, “because the Skywalker saga comes to an end with this ninth movie. There will be other Star Wars movies, but there will be a bit of a hiatus.”

While I’ve adored the new Star Wars episodes from J.J. Abrams and Rian Johnson, I found both Rogue One: A Star Wars Story and Solo: A Star Wars Story to be limp efforts that ultimately diluted the impact of Star Wars overall. They’re not bad movies, but part of the appeal of Star Wars to me has been its status as an event. I don’t hold any illusions about the sanctity of Star Wars. There have been deeply crappy stories told in this universe from the very beginning. We all know about the atrocity that is The Star Wars Holiday Special, but Droids, Ewoks, and the two Ewok TV movies were no picnic either. All of those subpar efforts didn’t share the same status as the movies that spawned them, though, and I’ve always felt that part of what’s kept Star Wars feeling so momentous for nearly half a century is in part its scarcity in theaters. When a Star Wars movie rolls around it’s special, the rare remaining piece of a larger monoculture that millions of people share and enjoy. That Disney and Lucasfilm have finally recognized that — alongside the realization that they can profit of Star Wars in other mediums — is another encouraging sign for Star Wars Episode IX: The Rise of Skywalker.

It’s Disney+’s World. We Just Live In It.

Writing At Midnight: How We Made Lancer, A Tabletop Mech RPG

Beyond Good & Evil Getting Netflix Film from Detective Pikachu Director

The Flash Movie Confirmed by Director to Be About Time Travel