Two days from the publication of this piece will be Valentine’s Day, the one day out of the year where one can openly offer their partner expensive gifts in exchange for possible sex without expecting an offended slap across the face in return. As of right now, it appears I’ll be spending the day alone – which is not unusual in and of itself, though this particular year I happen to be without even the excuses of “change of address,” “restraining order” or “she bought a gun.”

It’s also the time of year when people will feel (or flat-out be) compelled to watch “romantic” movies, most of which will be terrible – particularly the noxious creature that is the modern Romantic Comedy. Yeegh. Here’s the thing: Romance isn’t funny. Sex is funny. Romance, generally, is tragic. If that show was called Romance in the City, it’d be even worse than it already is. All of those great romantic comedies of the golden age? Those aren’t romantic comedies – they’re sex comedies that were simply made in an era when sex could only be implied or described via euphemism.

Anyway, here are some… different love/sex/whatever story movies I recommend you check out if you’re as burned out on the whole thing as I am. Many of them may or may not be new to you, but all of them are a bit off-kilter, to say the least. Think of them as a sorbet to cleanse your palette from all the crap that’ll be clogging up TVs, theaters and DVD players on the 14th. Alternately, they all make extremely effective “What the hell is wrong with you?” movies if you’re ever looking to rapidly end a party.

This isn’t as well known as you’d think it would be, but if you’ve heard of it at all it was probably described as the “Charlotte-Rampling-F*cks-A-Monkey-Movie.” It’s about a British diplomat in France who suspects his wife is having an affair. He’s game to be open-minded and Modern European about the situation – after all, he’s rather “close” with his secretary – until he discovers that her lover is a chimpanzee. In what amounts to a biting satire of French vs. British sexual mores, Max (creature-suit pro Ailsa Berk in a frighteningly convincing Rick Baker costume) is brought home to live with them so that the husband can try and figure out just what’s going on (Rampling’s character, of course, is matter-of-fact about the whole thing – as though it’s everyone else who’s acting crazy) and it becomes a kind of kinky spin on Beethoven-style movies wherein a straight-laced dad clashes with the rowdy pet the rest of the family adores. In case you’re wondering, no, we never get to see precisely what Max and the Missus are doing in their alone time, though we do get a scene where a monkey fires a shotgun, which is five kinds of awesome.

I don’t know if this was the inspiration for the Rob Zombie song, but since it’s an obscure low-budget European horror flick by cult director Jean Rollin, there’s at least a good chance. Rollin overwhelmingly specialized in lesbian vampire movies shot, edited and scored to resemble the prevailing art film aesthetic of whenever he was making them (his undisputed masterpiece is a mod/gonzo/trip epic titled – I kid you not – Vampyros Lesbos.) Basically, if you’re looking for Euro-chic models in translucent nightgowns feeling each other up to jazz-ish background music, Rollin is your man. This is one of his few films to feature a genuine linear narrative, such as it is: A toxic waste spill revives a dead woman as a sort of vampire, whose childhood gal-pal is so glad to see her “alive” again that she goes psychotic – ah, unrequited Sapphic-longing, what would bad movies do without you? That’s the hook of this one: The human woman is the monster – trapping victims to feed to her vampire would-be lover who herself wants no part of it and just wishes to be dead again. There are people who’ve found it strangely compelling or even moving. I’m not one of them, but it is odd as all hell. 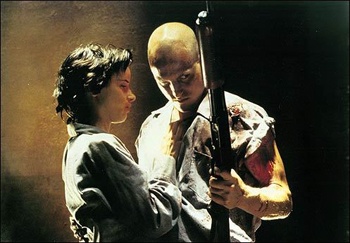 I know, I know, by now we’ve all seen this. But in case you haven’t, that’s something you need to rectify. Oliver Stone’s modern day Bonnie & Clyde riff – reworked from an early script by Quentin Tarantino (who’s not a fan of the result) – following Woody Harrelson and Juliette Lewis as a media sensation serial killer couple pursued alternately by an equally psychotic cop (Tom Sizemore) and a shameless TV journalist (Robert Downey Jr.) is somehow even more shocking, appalling, fascinating and frighteningly relevant over a decade later. Stone uses just about every camera trick, film stock, editing style and genre imaginable to craft a vision of a world barreling down the road toward Armageddon, suggesting with the subtlety of blunt force trauma that its mass-murdering lovebirds are ultimately the lesser evil next to the media that feeds on their adventures. For better or worse, this was a career-defining moment for a long time for many involved in the production; and Juliette Lewis in particular has probably never been as good in anything since. The late, great Rodney Dangerfield also appears, in a sequence that may be the most mean-spirited parody of traditional American sitcoms ever staged.

Yes, two monkey movies – and both from the same year, no less. (If I wanted to, I could fill this whole damn list with creature romance movies; Paul Schrader’s Cat People and Walerian Borowczyk’s The Beast immediately come to mind.) Technically, this is the sequel to the 1976 Kong, though since every version ends the same way it works with whichever one you know best. Basically, Kong has been in a coma (as opposed to, y’know, dead) since falling off the building, and science is trying to revive him via an artificial heart transplant – an operation that is performed by doctors walking on Kong’s chest with giant buzzsaws and a crane to hoist out his big-ass monkey heart. A recently-discovered female giant ape is brought in to provide a blood transfusion, so naturally Kong wakes up, falls in love with her and they take off on a destructive “date” that quickly earns the attention of the military. If you’ve managed to go through life without witnessing two people in gorilla costumes dry-humping on what looks like massive model-train geography, this movie will fix that.

As the title suggests, this is a reworking of Shakespeare via Troma Films – or, as the ad copy puts it: “From the writer of The Merchant of Venice and the director of The Toxic Avenger” – relocating the familiar star-crossed lovers’ tale to a slapstick version of the mid-90s NYC alt-punk scene with massive infusions of gore, perversion and scifi/horror elements. Heads explode, guts are munched, Motorhead’s Lemmy narrates, Juliet mutates into a cow-monster, and it’s still better than the one with Leonardo DiCaprio and Claire Danes. Law & Order: SVU fans may recall Will Keenan (he played a thinly-veiled Michael Jackson analogue named Billy Tripley in a memorably creepy 2004 episode) as Tromeo, while indie/underground music devotees may recognize Jane Jensen as Juliet, but probably not. The screenplay was by James Gunn, who went on to write the Scooby Doo movies and direct Slither.

Here’s one of the better recent attempts at a female-centric psychological horror film. It doesn’t totally work, but it’s a pretty amazing try. Unnervingly attractive Angela Bettis is the title character, a lonely, somewhat spooky but seemingly harmless woman with a troubled past and an obsession with dolls. She attempts romance with a man (Jeremy Sisto) but he’s dismissive. She attempts romance with a woman (Anna Faris – yes, that Anna Faris) who seems to genuinely love her but has problems with fidelity. All that rejection and betrayal aren’t very helpful to May’s already questionable psyche, and, well, it’s best you see exactly what happens in the third act of this movie without me spoiling it for you. Whenever I meet a woman who tells me she loves this movie, my immediate thoughts are: “This could be interesting,” immediately followed by “Good thing I still know how to sleep with at least one eye open.”

Oh dear. Of all the stuff on this list, THIS is the one I feel guilty about. Because someone out there is going to rent/watch this, and not be ready for it, and it’s going to be my fault. To that person, let me preemptively state: I’m sorry, but this is what you get for taking the advice of a man who puts King Kong Lives on a recommendation list of anything.

This is another one that starts with the premise of a husband (Sam Neil) who suspects that his wife (Isabelle Adjani) is A.) cheating and B.) losing her mind. He’s right on both counts, but as for what she’s actually up to… hoo-boy, are you (and anyone you watch this with) in for a surprise. Just know that Adjani also plays another woman that Neil’s character has his own affair with – and that that’s about the least unusual thing that happens in whole movie. Aside from… well, you’ll see… this is worth seeing for Adjani’s performance alone; one of the greatest nervous reakdown turns ever put on screen.

Can You Game While Drunk?