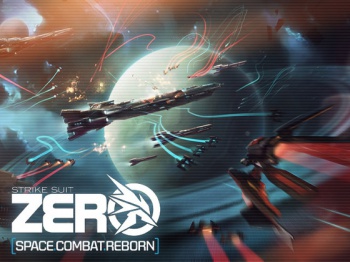 The space combat sim genre doesn’t get much love these days. It’s a void in the heart that Strike Suit Zero does its best to fill and it makes a pretty decent go of it, with flashing beams and explosions galore in massive, frantic battles between dozens of ships both large and small. But underneath all that sizzle, there’s very little in the way of steak, and the truth is that in the midst of melees that make the attack on the Death Star look like a spitting match, I found myself feeling a little bored.

Strike Suit Zero is a pure yank-and-bank arcade space sim. There are no shields to balance, no energy to transfer, no complicated sensors to mess around with; the throttle is limited to three settings – fast, slow and cruise – and there’s not even a proper cockpit view in first-person mode. If you want to pick nits it’s not even really “yank-and-bank,” since despite being a flight sim it’s actually much easier to play with a mouse than a joystick. Both are supported but the unlocked crosshair in mouse mode allows weapons to be aimed beyond your ship’s direction of travel, which makes tracking and killing enemies much easier.

You begin the game as a fighter jockey who’s trying to earn reinstatement after being kicked off the flight line for some reason. Naturally, all hell breaks loose in a war between Earth and one of its dissident colonies during your final test flight, leaving Earth’s navy decimated and helpless against a huge fleet armed with a mysterious planet-busting weapon and a grim determination to use it. It’s a desperate situation, and despite being an unreliable screwup, it’s up to you to put a stop to it. And that’s no overstatement – it’s all up to you. If you don’t take out the targets, they don’t get taken out; if you don’t protect the bombers, they get shot down; if you don’t haul ass to defend the critical asset that’s mere moments away from being turned into burning space junk, neither will anyone else. It’s normal for players to fill the heroic role in videogames, but your fellow pilots in this one are useless to the point of silliness.

After a couple of introductory missions behind the stick of a conventional space fighter, you’ll find yourself seated in the eponymous Strike Suit Zero, a prototype heavy fighter that can transform into an incredibly destructive giant robot – a mecha. Leaving aside questions about the practicality of a humanoid robot floating around in the middle of space, the SSZ in “strike mode” – which is to say, giant robot mode – kicks a lot of ass, with a primary weapon that delivers a tremendous punch and never runs out of ammo. But as hard as it hits, its mobility is comparatively terrible and in combat, speed is survival. The net result is that while it’s handy against stationary targets like supply depots and gun emplacements on capital ships, it’s not particularly useful in the massive, Star Wars-style furballs that make up the core gameplay of space combat sims. The Strike Suit ends up feeling like a magical space howitzer being towed by the Concorde: fly up to a target, transform, blow the bejeezus out of everything in range, transform back and hit the road. It’s possible (and, I would venture, more fun) to spend most of your time in “pursuit mode” – that is, fighter mode – but success sometimes depends on dishing out the massive, wholesale destruction that only the suit can deliver.

Defeat, on the other hand, brings with it the unique frustration that can only come from a checkpoint save system that has far too few checkpoints. Missions generally have multiple parts and often include surprises (typically thanks to the inability of your cohorts to handle even the smallest problem without your help), and failure can very easily send you back through multiple stages, forcing you to replay some rather lengthy and, after awhile, not-terribly-exciting mission segments numerous times. The eventual effect is that action-packed space battles become overlong exercises in tedium.

It’s a feeling that everyone else in the game seems to share. Coming upon the remnants of the worst interstellar beatdown since the Federation and Borg exchanged pleasantries at Wolf 359, your wing leader sounds positively bored as she notes that it could well mean certain defeat in the war; the captain of a crippled capital ship being pounded by enemy fighters expresses almost as much concern about his plight as about whether he should super-size his order. It’s actually distracting at first – don’t these people care that doom is at hand? – but after awhile it starts to make a sort of perverse sense: You’re doing all the work because nobody else in this game gives a damn what happens.

The story takes a few ludicrous twists and turns, the most contrived of them all being a rather heavy-handed nod to the great space-borne RTS Homeworld. The whole thing boasts a very powerful Homeworld vibe, in fact, both visually and aurally, and while some of the textures aren’t the most detailed ever seen in a PC game, in the heat of battle, with dozens of fighters and hundreds of missiles and plasma bolts flitting between capital ships and space stations set against glorious galactic tableaus, it’s hard to argue that the game looks anything but great. Less attention has been paid to the narrative that strings it all together. A good bit of exposition takes place during missions but once the action is over you’re simply dumped back to a menu that allows you to replay any of the missions you’ve previously finished or jump into the next one in the list.

Strike Suit Zero isn’t the next Freespace. The potential for frustration caused by the relative dearth of save points – and, to be frank, the ridiculous demands of your superiors and incompetence of your companions – is too high, and even though the fate of Earth itself hangs in the balance, it never manages to generate any real sense of urgency. But for flashy, pyrotechnic space battles, there is a lot here to like, and until the next Freespace comes along, it’s not a bad way for long-suffering space cowboys to pass some time.

Bottom Line: Strike Suit Zero is a decent space combat sim but the strike suit angle feels forced and ungainly, and the game misses on a few too many important points to be a true contender for the crown.

Recommendation: Space jockeys who aren’t too picky about how they get their fix these days should at least give it a look, but if what you really want is the experience of piloting a nimble, powerful mecha, it’s a miss.

Notch Decides Not To Back Psychonauts 2