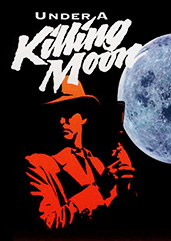 There are some game genres where I can usually walk into any random title and be fairly confident that I’ll find at least a base level of enjoyment. There’s something about RPGs, for instance, that I inherently like. Likewise, with space flight sims. A game might be flawed but you can still pretty much guarantee that I’ll have some fun as long as it has spaceships that “p-koo! p-koo!” each other.

After playing Tex Murphy: Under a Killing Moon however, I’ve come to the conclusion that point-and-click adventure games aren’t that sort of genre for me. I had kind of been hoping they were. Granted, my time with adventure games on the whole has been pretty limited, but the experiences I have had, by and large, have been really positive. Modern adventure titles like Telltale’s The Walking Dead and The Wolf Among Us have ranked among my favorite releases in recent years and back when I looked at I Have No Mouth and I Must Scream I walked away from it feeling really positive. Comparatively, Under a Killing Moon felt like a chore.

For the uninitiated, the game follows the adventures of the titular Tex Murphy, a private gumshoe trying to earn a living in a future where nuclear wars have left much of the populous mutated and living uneasily alongside normal humans born with a resistance to radiation. When the game starts, you take on a simple case investigating a burglary. This quickly leads the intrepid Tex however into a larger case involving a dangerous cult.

I almost feel bad criticizing Under a Killing Moon because there are some definite bright spots to it. The concept, for instance, is one that I really loved. Much like with Blade Runner there’s something inherently cool about an old noir caricature stomping around a degrading and degenerate future-scape. It just plain works.

The game’s humorous tone also really adds a lot to the experience and even potentially saved it in places. Other Good Old Reviews writers have, in the past, expressed a general disdain for live action FMV and, with a few exceptions, I’m of a similar mind. The built-in silliness of Under a Killing Moon however, does a lot to transform a few more of the stilted performances into endearing parts of a story that’s often intentionally hammy. 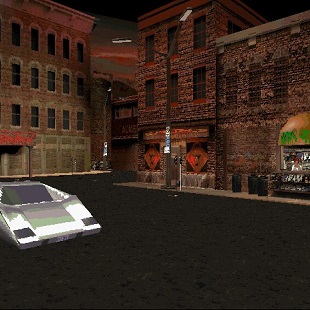 The character of Tex himself is also well portrayed. A lot of this owes to the performance of Chris Jones who seems tailor-made to play Tex’s somewhat bumbling P.I. More than that though, his constant observations about the game’s many characters, items, and locations are just consistently and genuinely funny. Granted, I did sometimes grow tired of having to sit through the same mandatory audio descriptions every time I clicked on something, but even after repeat listens many of them are still amusing and do a good job of making it fun to walk in Tex’s shoes.

It would be more fun, of course, if the game’s didn’t look and control so terribly. Now, of course, visuals don’t make the game and you do sometimes need to make allowances for older titles. I’m also sure that the game 3D environments probably seemed like the pinnacle of nifty-ness back when it was first released in 1994. Unfortunately, as countless other titles have shown, what was revolutionary 20 years ago often has an unfortunate habit of looking like garbage in the present. Under a Killing Moon, in turn, is almost entirely defined by its ugly textures, flat looking environments and generally grainy display.

Again, I could have perhaps excused that if it controlled well. Under a Killing Moon, employs some of the worst movement controls I’ve ever encountered. Pushing forward with your mouse to move forward in a first person perspective never feels less than awkward and looking around with the arrow keys can be frustratingly imprecise. 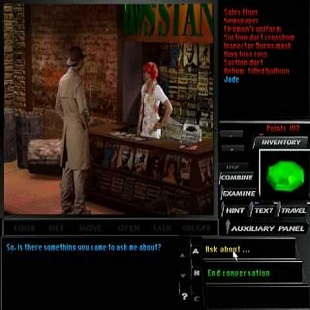 This is an especial problem at times because, as with most point-and-click adventures, a lot of the actual gameplay is based on looking around and finding stuff. The controls in Under a Killing Moon just aren’t precise enough to properly accommodate this sort of gameplay in a 3D space. There were just too many times I found myself searching for an item and missing it because I was turned a little bit too far in one direction.

Granted, part of the problem was probably rooted in my own lack of attention to detail as well as my general impatience with games that expect me to endlessly explore the same areas over and over again until I find what I need to proceed. Under a Killing Moon isn’t as bad in this regard thanks to a hint feature that keeps this sort of stalling down to a minimum. That said, I was still too frequently frustrated with the process of actually playing the game.

It’s a shame because I had a lot of fun with the story and really like the character of Tex. I also loved having conversations with NPCs and choosing between dialogue options. Unfortunately, in the end, I didn’t feel like I benefited all that much from actually playing the game and that I might have enjoyed it even more if I’d invested my time in a solid Let’s Play.

None of this is to say that Tex Murphy: Under a Killing Moon doesn’t have some worthwhile qualities. I just wish that its diamonds hadn’t been mired in so much danged rough. Let me put it to you this way. On the last night of my playthrough I looked at my computer and I sighed. It wasn’t a “I have so much to do besides playing this game” sigh. It was a “I have so much I’d rather do than play this game” sigh. That’s a reaction you might want to keep in mind if you consider picking it up at GOG.

Come back next week for my review of the isometric action classic Crusader: No Remorse!