If laughter equals having a great time, then the time you spend playing The Jackbox Party Pack 2 with a good group of friends just might be the best time you’ll have playing video games all year. 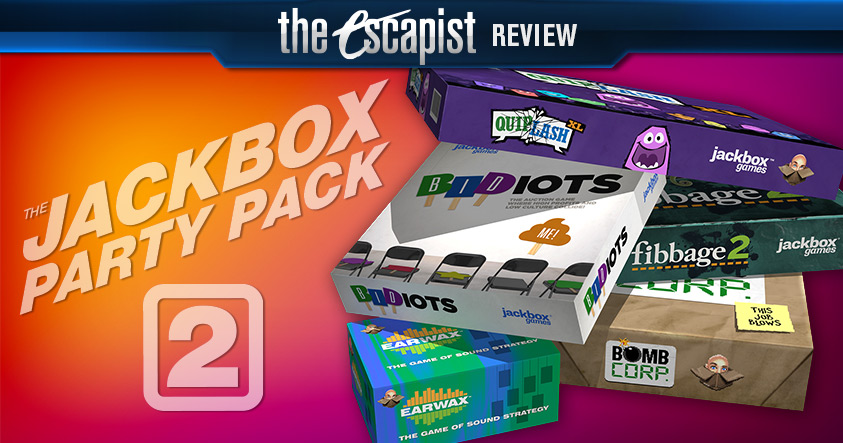 Like its predecessor, Party Pack 2 contains a collection of five party games that are all designed to be played using smart phones as the controllers, essentially giving each player their own personal screen for entering answers or responding to prompts.

It’s an ingenious idea for several reasons. For one, you don’t need to have 8 expensive controllers just lying around in your house to get a whole group of friends in on the action. Anyone with a smart phone, tablet, laptop or computer can simply pull up Jackbox.tv in their browser, enter the room code, enter their name, and be ready to play.

The big innovation though is that it allows each player to receive their own individual instructions or prompts and then secretly enter their answers. Each game in the Jackbox Party Pack 2 puts their own little spin on this core idea, and while not all five of them fit the party atmosphere, they’re all at least worth checking out.

Speaking of those five games, the best way to talk about them is just to go into each one individually, so let’s dive right in. 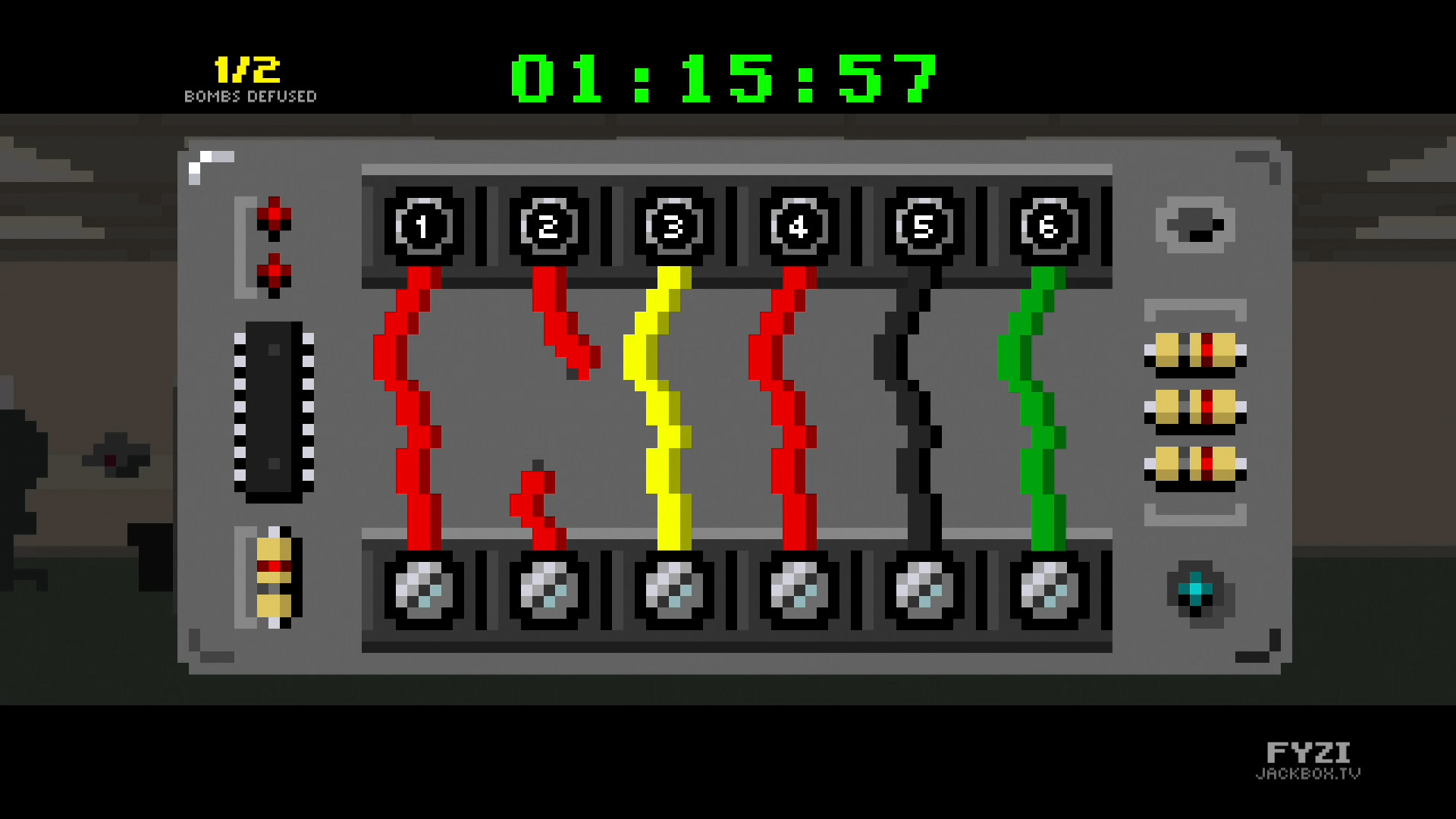 There are a few games in the Jackbox Party Pack 2 that might make you think: “How in the world did Jackbox Games come up with this idea?”

Bomb Corp. is not one of those games. This is straight up a simplified version of Keep Talking and Nobody Explodes.

Basically, you and your friends play as new employees at a corporation that deals exclusively with disarming bombs. Well, disarming bombs, and filing papers in filing cabinets, which for whatever reason also explode if filed incorrectly.

The trick is, in order to disarm a bomb, players must cut a series of wires in accordance with a randomized set of instructions that are split up among those playing. One player might have step one, which says to cut all of the red wires; another player will have step two, which may say that step 1 was supposed to say green wires; and another player with step 3 might have to warn everyone to only cut even wires.

As you can imagine, it can all become pretty confusing and good communication among your teammates is essential, especially when the directions are suddenly written by five-year-olds who refer to the wires as “ugly,” “weird,”or “cool,” and you and your friends must determine what that actually means in terms of which wires need to be cut.

The problem with Bomb Corp. is that it’s just not well suited for a party environment. There’s a definite sense of satisfaction when you and your team make it through a tough series of diffuses, but if one person makes a single mistake, you have to start all over from the beginning of the day, and then everyone starts playing the blame game, which is never fun.

Also, strangely there’s no option to skip through the dialogue in between each puzzle, which is weird since you can skip through it in every other game in the pack. 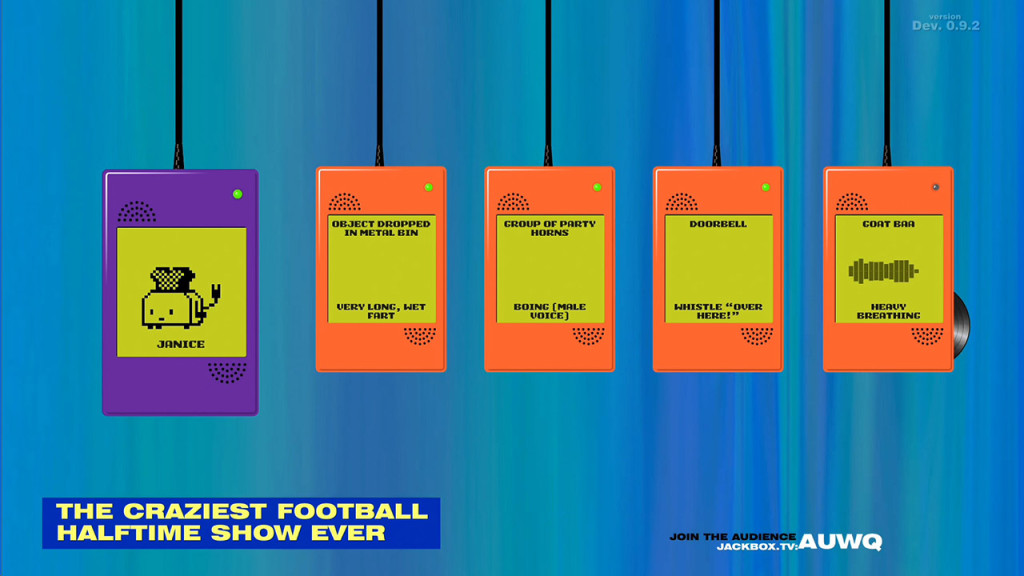 I was actually expecting Ear Wax to be the ugly duckling of the pack, but to my surprise, Ear Wax is by far the most entertaining of the new offerings in Party Pack 2.

On paper, the game doesn’t sound all that exciting. Every round begins with one player as the judge, and the rest picking two sound effects from their own personal list that best go along with the prompt. Think Apples to Apples, but with sound effects.

If you’re a fan of dirty toilet humor, this is the game for you. The prompts offered in Ear Wax are by far the most adult of any other game in the Party Pack 2 and may even have you giving sound effects to prompts involving your friends, like: “Player 2’s idea of foreplay.” I had my friends describing what my body odor smells like by using a series of farts and cartoon whistles.

It helps too that games of Ear Wax are nice and short. All you need is to earn the judge’s pick three times and the game will end, allowing players to drop in and drop out with ease. 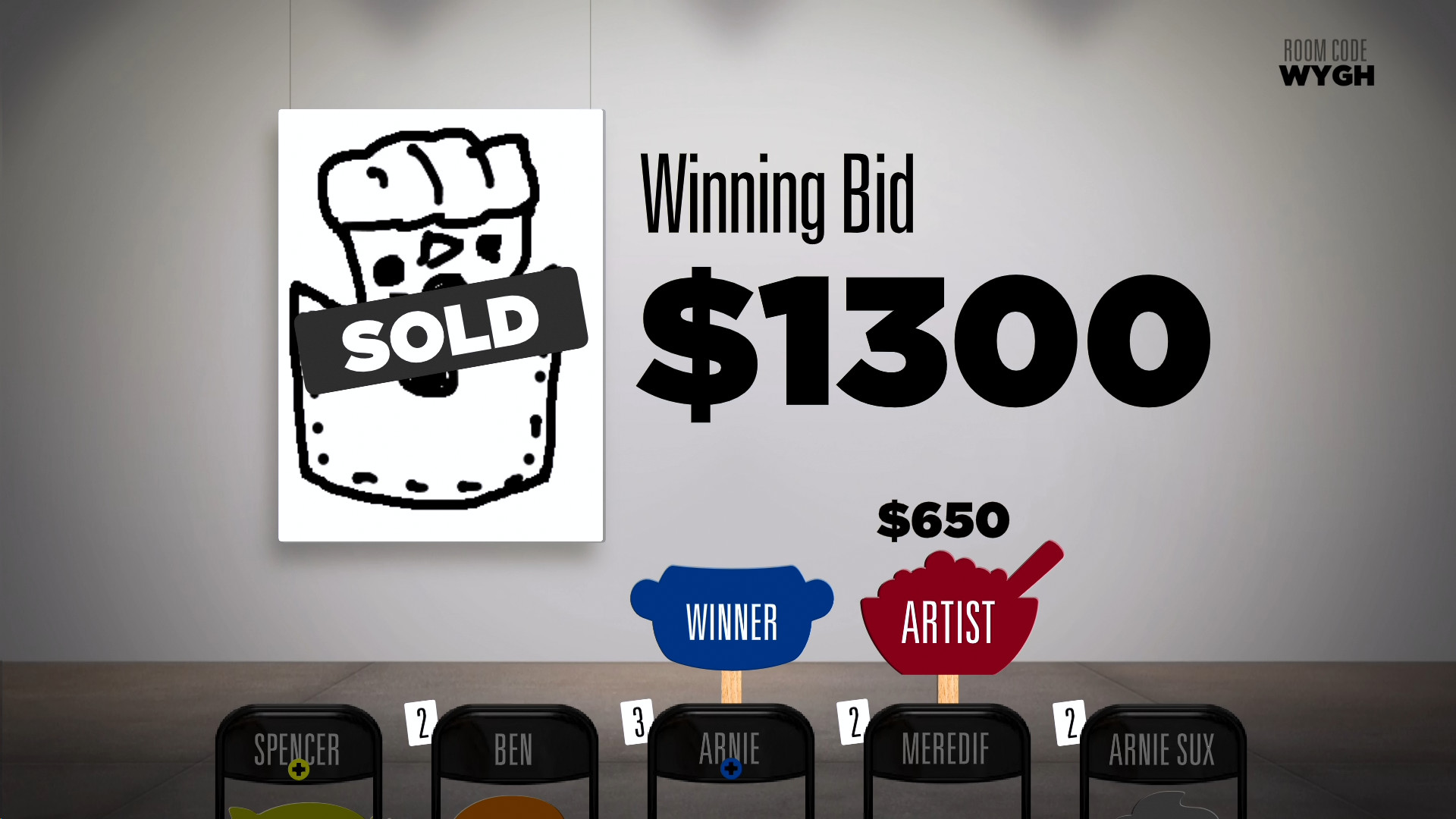 Bidiots takes the spot of Drawful from the last Party Pack in terms of being the only game that lets players express their artistic abilities, or lack thereof, which is a bit of a bummer because Bidiots isn’t nearly as fun as Drawful

Players begin by drawing two items to be placed in an auction, with each item being designated an arbitrary monetary value that only certain players will know. When the auction begins, everyone has $3,000 to spend bidding on items that they believe are worth a lot of money.

Each player knows the value of three or four pieces of art, but no information regarding the others. The object of the game is to make the most profit by buying items you know are high value for as little as you can, while mind gaming to ensure your opponents overpay on items you know aren’t worth much.

What makes the game difficult is that the two prompts everyone used to make their drawings are all very similar. So you might have information saying that “Slaughterhouse” is worth $3900, but upon winning the auction, you find that it was only worth about $600 because it was actually a picture of a “Meat Packing District.”

This leads to some fun moments where a player bids on an item the rest are convinced isn’t worth anything, and ends up making a huge profit when the item is revealed to be worth a fortune, or vice versa.

Bidiots is designed around creating those moments, but the problem is that they are often too few and far between, especially compared to the other games in the pack that offer those moments nearly every round. 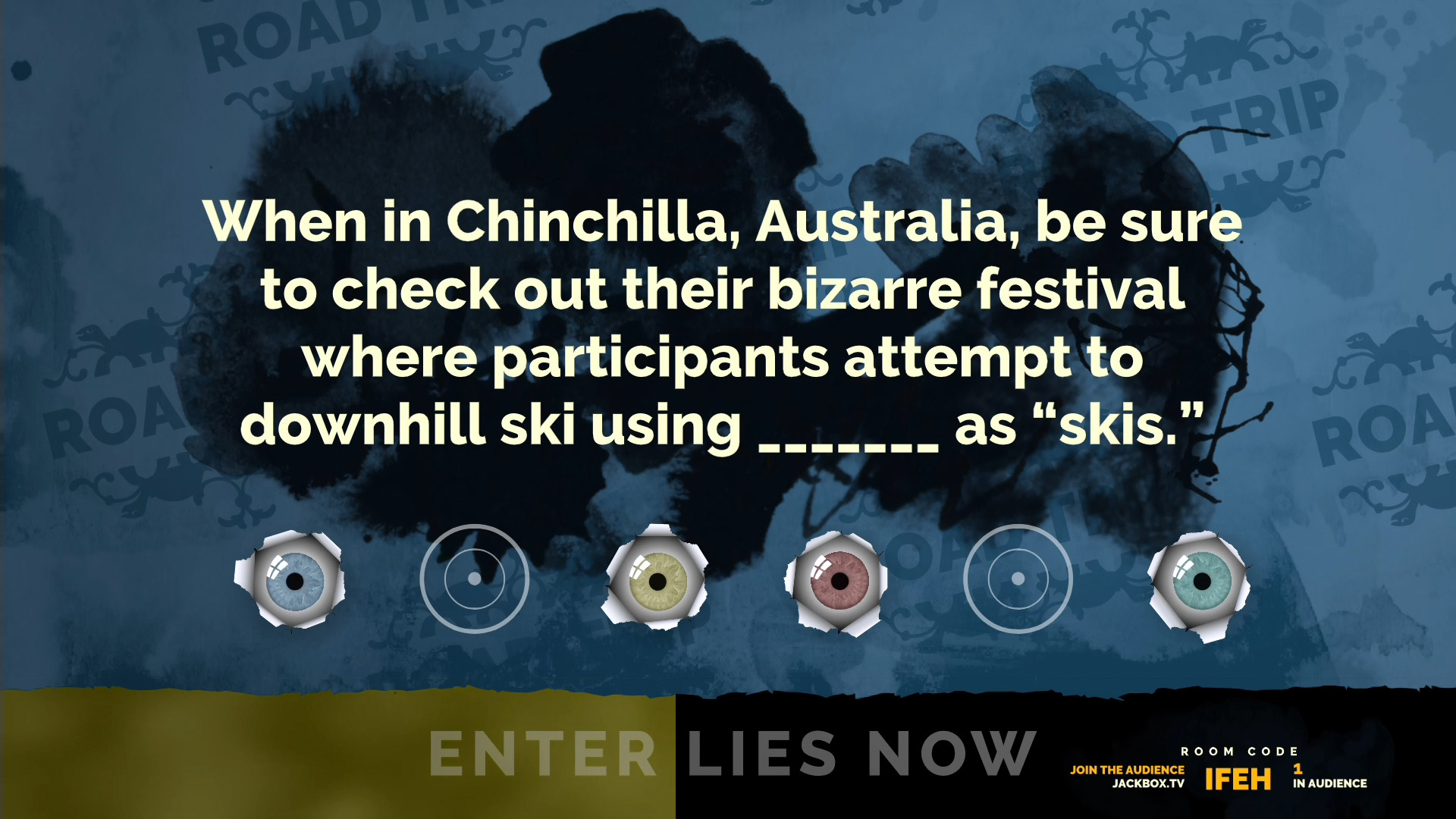 Fibbage was a game that was available in the first JackBox Party Pack and was one of the best games of the bunch.

It is a simple trivia game that has players answering almost impossibly obscure questions with lies that they hope will fool the other players into thinking they’re true. The players’ answers are then mixed in with the real one, and everyone must choose which answer they believe to be correct.

As they say, the truth is often stranger than fiction, and if you weren’t a believer of that phrase before, you will be after a couple of rounds of Fibbage, because some of these answers are absolutely insane.

You may have noticed that in describing Fibbage 2, I’ve really just been describing Fibbage. That’s because there’s really not much of a difference between the two games. Fibbage 2 adds more questions, has an updated look, and adds a new feature that allows players to remove all choices outside of one lie and the truth once per game, but other than that, this is more of an expansion pack than a sequel. 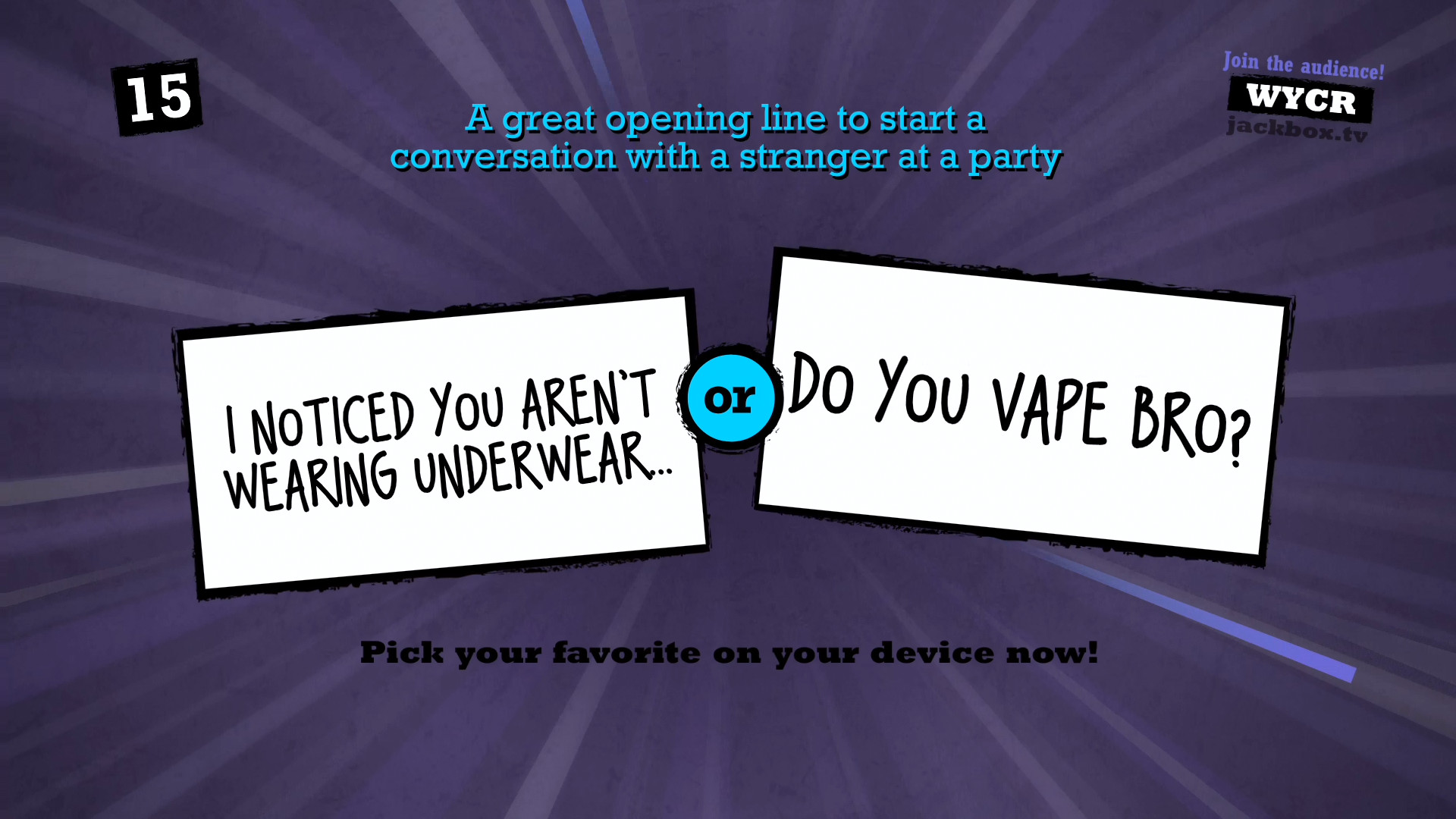 Speaking of expansion packs, that’s exactly what Quiplash XL is! Quiplash is probably my favorite game of Jackbox Party Pack 2, but also the most disappointing as someone who has played a lot of Quiplash.

If you have never played Quiplash though, you are in for a treat. Like all of the best games in the pack, Quiplash is very simple.

At the beginning of each round, players will receive two prompts that they must answer with just a word or a phrase. Once all answers are in, the game will match players who responded to the same prompt and show their answers. The remaining players vote on the quip they like the best and points are awarded based on how many players liked each response.

Essentially, it’s Cards Against Humanity without the cards. And just like Cards, if you’ve got a group of like minded friends who enjoy a good laugh, magical moments happen when playing Quiplash.

What’s disappointing is that even with 100 new prompts and the added DLC pack, I was still getting multiple prompts that my friends and I already heard before. It’s also puzzling how Fibbage 2 was able to add the ability to choose your avatar and sound effect, while Quiplash XL, or any of the other games in the pack for that matter, don’t give you that same option.

It’s also worth mentioning that Quiplash XL, Fibbage 2 and Ear Wax all have an audience feature that allows players who are watching via a streaming service to join in the game remotely and affect the outcome, which makes it the perfect game for streamers who are looking to find a way interact with their followers.

On the downside, the jackbox.tv website that players must used to connect to the game still isn’t perfect, and we had a few games that we were cut short due glitches. To be fair, I’ve had less issues with glitches in Party Pack 2 than the previous game, but it can still be frustrating to have a game suddenly end, especially when you’re looking forward to seeing the reactions of your friends to one of your answers.

Bottom Line: Quiplash XL, Fibbage 2 and Ear Wax are must haves and are worth the price of admission alone, assuming you don’t have Party Pack 1 and the standalone Quiplash.

Recommendation: If you’re the type who likes to invite over a bunch of friends to hang out, drink beer, eat pizza and play board games, Jackbox Party Pack 2 is the video game you’ve been looking for.