As I said when I started writing this column back at the beginning of 2014, my favorite type of horror by and large tends to be more psychological than physical. That doesn’t mean that I have no love for “Creature Features” mind you, just that I have my preferences when it comes to being scared and a good old-fashioned mindfuck has to be part of it. Most urban legends easily cover both and more. There’s nothing like an old folktale told around a campfire late at night about a monstrous creature roaming free in the same remote patch of woods you’re exploring to make the hairs on your arms and the back of your neck stand on end as your imagination amplifies every distant sound into something beyond terrifying.

Which brings us to the subject of this week’s column, the Legend of the Goatman! Over the long Thanksgiving holiday weekend a firestorm kicked off on social media after a year-old YouTube clip about Goatman went viral. The clip, from the Strange Mysteries Channel on YouTube, gives a brief explanation of several recent sightings of the Goatman as well as a brief popular history of the creature of American folklore: presumably half-man and half-goat, and also possibly a puppy-beheading, teen lovemaking- disrupting, hiker murdering, ax-wielding psycho from the depths of hell! Naturally this caught my interest, since I’ve been dying to write about another so-called urban legend since my last Slenderman post.

The first reported sighting of the abomination reportedly happened in nearby Maryland back in 1957. Since then the Goatman, who bears a striking resemblance to Pan or a Satyr, has been “spotted” numerous times in places as far away as Kentucky, Texas and even Wisconsin.

So who or what is the Goatman? That’s a great question! With so many different origin stories for this creature, some going back as far as the Knights Templar or even further back to Ancient Greece, cutting through the miasma of schoolboy fantasy to get to the true history of the legend can be tricky, at least without a guide. So without further ado here are some of the versions of how the Goatman came to exist in different parts of the United States.

According to most who believe in the mythical creature, the Goatman came from a batch of weird science gone way wrong in the form of a genetic experiment at the Maryland Beltsville Research Agricultural Center, at the time run by Stephen Fletcher. The most popular version of Goatman’s creation is that Fletch mixed his assistant’s DNA with some from a goat, resulting in the creation of wholly unnatural creature never meant to suck air or walk the land, hence the original name of the beast the Prince George’s County Goatman. Then of course the Goatman got loose and began wandering the countryside in search of helpless victims and puppies. There is also another version of this myth with a gothic romantic twist that suggests Fletcher’s dying fiance was the impetus for the unnatural experimentation.

It’s worth noting that this explanation of the Goatman’s inception, also known as the Maryland or Prince George’s Goatman, is so popular that the USDA facility in Maryland was forced to officially deny it! 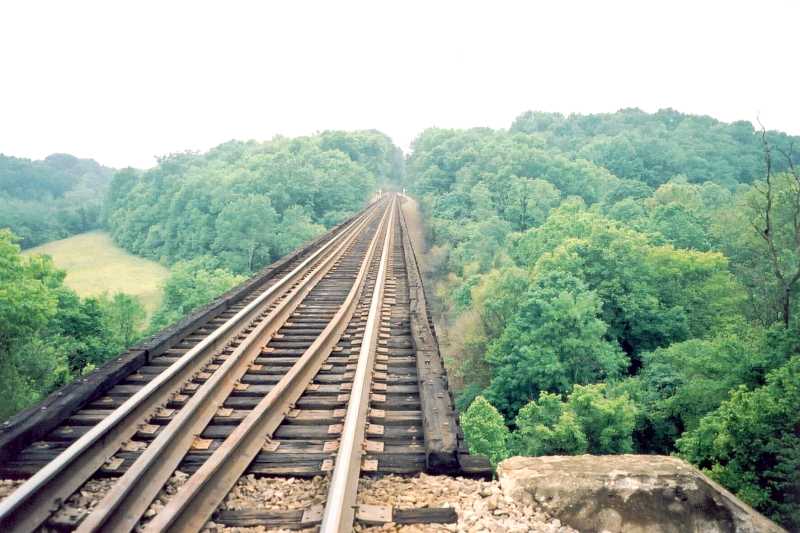 Another popular origin story for the hooved behemoth takes place in Louisville. There the Goatman is also known as the Pope Lick Monster, and is described by an alleged eyewitness as “a large humanoid creature with furry, goat-like legs, alabaster skin, wide-set eyes, and horns that protrude from greasy fur.” This version of the Goatman lives beneath a Norfolk Southern Railway trestle over Pope Lick Creek, in the Fisherville area of Louisville, Kentucky. Using hypnosis and voice mimicry the Pope Lick Monster allegedly lures unsuspecting trespassers onto the trestle and into the path of the oncoming train on the active rail. Also for kicks he likes to jump on the rooftops of passing trains and menace the terrified people inside with a bloody ax and inhuman screams that sound like the devil raping a sheep. It’s believed that his appearance is so hideous that those who accidentally stumble upon him go insane with fear and leap to their deaths to avoid coming into contact with him.

But where did the Pope Lick Monster come from? Again it depends on who you ask. Some say he was a circus freak who blamed the world for his condition and vowed to seek revenge against all mankind for shunning and ridiculing him. Others say he was a monster being transported from parts unknown, a secret government project that escaped the cargo hold and took up residence where he could not be retaken. Honestly the multiple variations of this version all sound like bad fan fiction from a long forgotten X-Files message board.

The most popular version of the folk legend is the one locals like to tell the many visitors who flock to area in hopes of catching a glimpse of the monster. According to the people who live nearby, the Goatman was an ordinary farmer who secretly began sacrificing goats to Satan in exchange for the gift of eternal life, only to be granted his wish in the form of a goat man hybrid body that thirsted for the blood of the innocent.

Sadly there have been a number of deaths at the site despite the city erecting an 8-foot wall to keep daredevils and devotees out since the bridge is located on one of the main railroad routes into Louisville. Despite authorities warning visitors that fully loaded freight trains come barreling down the tracks several times a day making it easy for someone to get stuck in their path and squashed like a bug, every year a handful of thrill seekers risk the very real possibility of death by train all in the hopes of a single glimpse of the legendary beast. 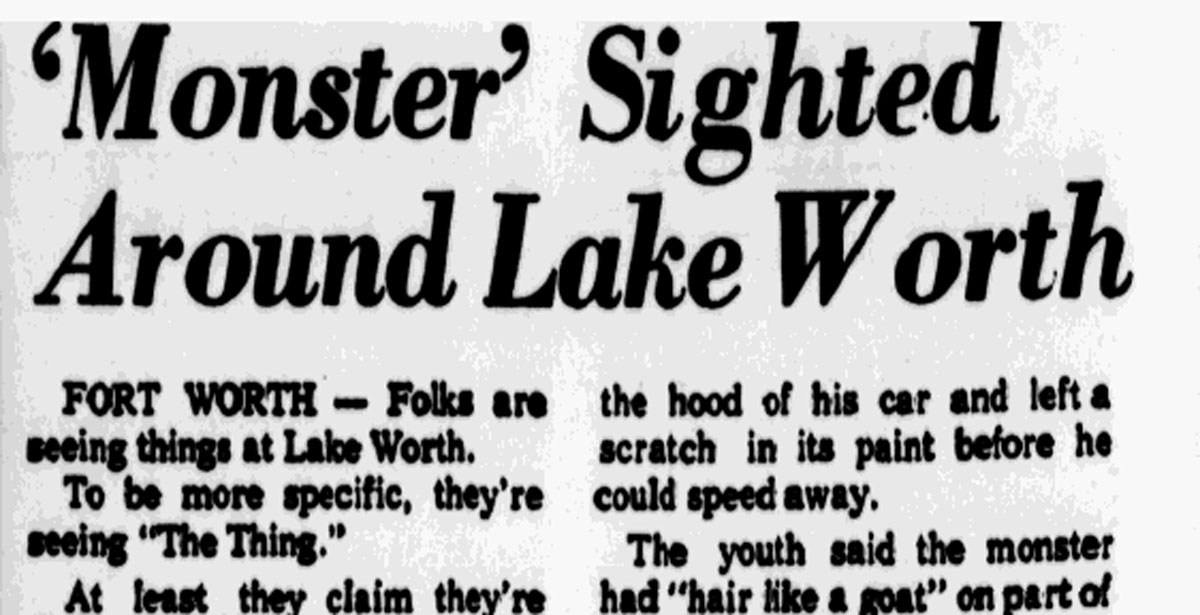 Then there is the Goatman who allegedly lives in and around Lake Worth near Fort Worth, Texas, who is also known as the Lake Worth Monster. In the summer of 1969 several sightings were reported of the half-man, half-goat creature with both fur and scales like a fish. Terry Deckard, a local reporter, decided to cover it for his paper. The resulting story “Fishy Man-Goat Terrifies Couples Parked at Lake Worth” made the front page. Less than a week later the creature allegedly jumped from a tree onto a man’s car. A few days later 10 eyewitnesses claim they saw the monster hurling tires at them from a gorge with inhuman strength as they gaped on in horror at its hideous appearance. A picture surfaced of the monstrosity captured by Allen Plaster in October of that same year. The police were called in to investigate and the local television news ran in the field interviews with eye witnesses as fear gripped the residents that something evil and unnatural and, worst of all, violent was living among them. KDFW later aired them together for an in-depth special report about the Lake Worth Monster. The legend continues to this day, with high school kids paying tribute by donning gorilla costumes and parading around the lake in celebration of the legendary creature. 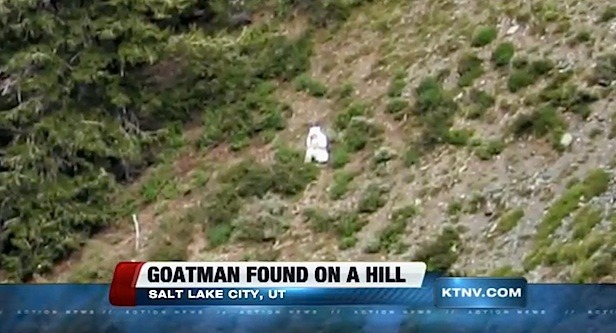 There are several other versions of the origin of the Goatman just floating around the web these days, each of them adding their own fuel to the folklore fire. Some people believe that the Goatman is an old hermit who is simply trying to scare away humans from his camp like something out of an old Scooby-Doo cartoon. Others suggest that the Goatman was once an angry goat herder who lost his sanity after a group of teens caused the death of several of his beloved flock and is still seeking revenge for his loss. A fair number of fanatics have suggested that the modern day Goatman is none other than a mythical Satyr of olden times, or perhaps even the misunderstood ne’er-do-well Pan himself. With the impending release of the new Krampus movie a few people have even started to suggest the Goatman could be the nefarious counterpart to Saint Nick. Then there is a whole contingent of fans who believe the Goatman is a magical creature, not unlike Bigfoot or the Loch Ness Monster or the Chupacabra. From this last group there are those who insist that the Goatman is part of a larger group of shapeshifters and can take the form of anyone from the sad, homeless drunk begging for change at the store to your parents and teachers!

Last but far from least are those who believe the Goatman represents something far more sinister and may in fact be the devil himself or one of his powerful minions let loose on Earth to torment mankind in our final days. These religiously inclined individuals note the similarity between the Goatman and the terrifying Baphomet, a figure often aligned with Satanism or dark occult practices. For them the Goatman is a sign of the impending battle of Armageddon, that he may be the Antichrist himself, and that his unholy existence is proof that the end of the world is already upon us since the one with cloven feet and devil’s horns already walks among us. 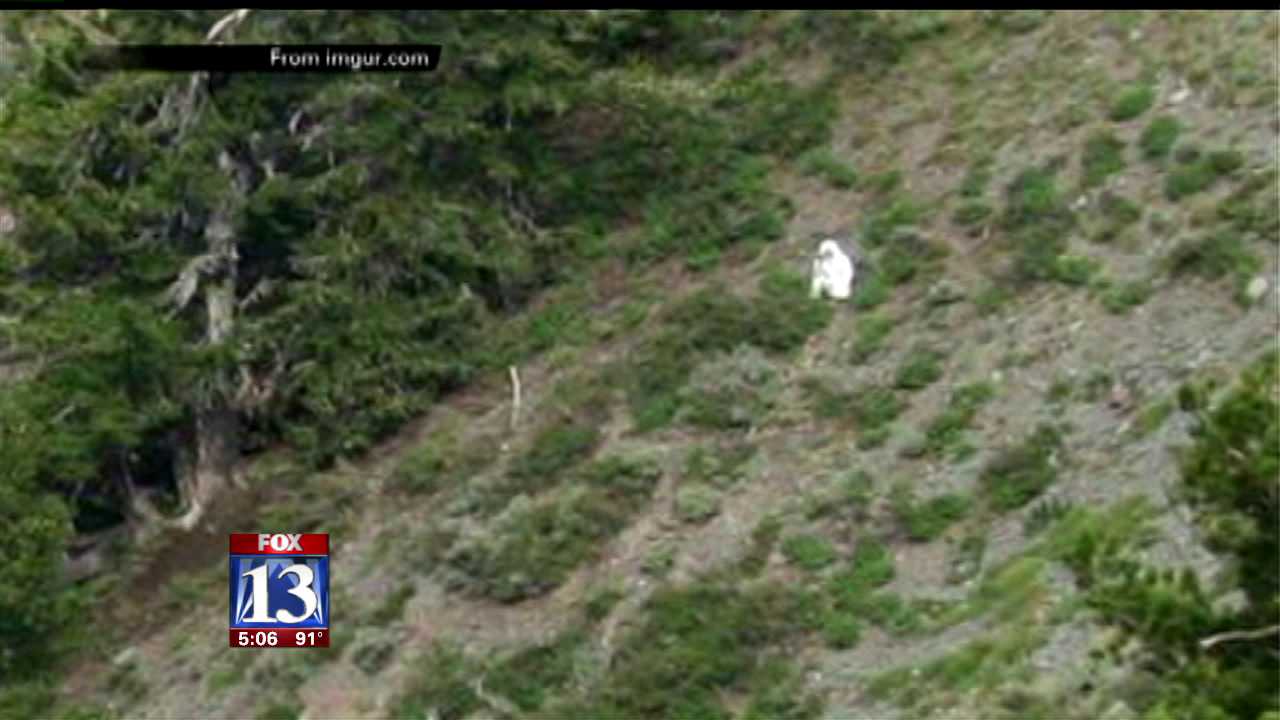 Since Thanksgiving more and more stories of the mythical creature have been circulating but so far there is still no tangible proof that the Goatman is real, just the stories that may or may not have actually happened, which is all detailed in that Strange Mysteries clip. Still all these new sightings being reported in the beasts old stomping grounds have some people downright alarmed, and with good reason. One of the more terrifying stories passed down about the Goatman since 1962 alleges that he brutally dismembered 14 hikers who wandered too close to his actual home, chopping them to pieces and strewing the parts across the forest. The murders were never solved and so the legend continues to this day.

With the sudden resurgence of interest in this mythical creature it’s no surprise to hear that a Goatman movie is already in the works. I don’t know about you but all this talk of a goat-man hybrid with superhuman strength and possible psychic powers just leaves me with one burning unanswered question: Who would win in a fight between the Chupacabra and the Goatman? For now all we can do is dream that we will one day know the answer and avoid running on trestles, wandering off in the forest, and hanging out in lake beds in Texas.

For more on the Goatman check out J. Nathan Couch’s book, Goatman: Flesh or Folklore? It’s available on Amazon and seeing a surge in new sales.

These Monstrous Baby Galaxies Are Shrouded In Dark Matter