E3 will be under a full head of steam by the time you read this, which means you’re not actually reading this at all. You’re flitting around the Internet looking for the latest tweets, trailers and live, up-to-the-second coverage of all the high-intensity flash-bangery taking place at the year’s biggest gaming event. And so, secure in my isolation, I’m going to talk about something near and dear to my heart, and also a bit of an antithesis to the whole E3 mentality: magazines.

I started buying Computer Gaming World in the early 90s and it remained my mainstay mag for years, before giving way to PC Gamer shortly after the turn of the millennium. But my love for the medium goes back even further, to the days when otherwise normal people would spend interminable hours typing in line after line of BASIC code, squinting at the tiny type jumbled across the pages, just so they could play a primitive version of Tron Light Cycles – but probably not until blowing even more time combing through the program looking for that single little typo that was keeping the damn thing from running. Good times indeed.

So it’s not too hard to figure out where my pro-magazine bias comes from when I say that I’m a little sad to see the print medium dying a slow, ugly death at the hands of the infinitely flashier, more immediate and essentially free Internet. Obviously I can’t complain too much – I spend an awful lot of time here, after all – but in spite of the fact that the digital era offers immeasurably more of everything, I occasionally find myself looking back wistfully and wondering if maybe there’s some way to teach the kids these days about the joys of good old-fashioned page-flipping.

You might think, then, that Best Buy’s recent announcement that it’s hooking up with Future US to publish a new magazine called @Gamer would stoke my fires a little bit. At 100 pages per issue it’s hardly a behemoth but the price is right and the simple fact that someone out there has enough faith to launch a magazine when all signs point to “no” should be heartening, perhaps even inspiring. You would, however, be wrong.

Consider the obvious credibility issue. Future has hired two industry vets to helm the project, which will be overseen by its own presumably-experienced group Editor-in-Chief and Editorial Director. Vice President John Gower went out of his way to note that it will be an “independent” magazine, meaning, one would assume, that it will cover the industry without any kind of overt Best Buy slant outside of the advertising. It sounds good and maybe it’s even sincere, but there’s just no way to overlook the fact that Best Buy is a retailer selling the products that this magazine will be covering.

Remember when GamesRadar became TombRadar to celebrate the launch of Tomb Raider: Underworld and “the 9/10 scores it is picking up across gaming websites and magazines” that turned out to be pretty much non-existent? Or before that, when Jeff Gerstmann got the boot from GameSpot for dumping a 6/10 review score on Kane & Lynch after Eidos had sunk what I would guess was a fairly substantial amount of money into advertising the game on the site? 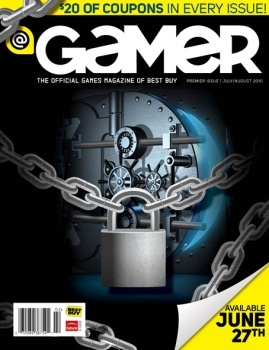 Best Buy doesn’t make games but it is in the business of selling them. So if it puts big bucks into promoting a particular blockbuster release, with in-store POP, handouts, spiffy buttons for the staff and maybe some exclusive pre-order DLC, and then that blockbuster turns out to be a big piece of crap, can we really expect @Gamer to be entirely upfront about it? Or, reflecting on Mr. Gerstmann’s career-changing brush with honesty, will the guys making the decisions pay a little more attention to the name at the top of the checks? Vested interest plus lots of cash flying around equals a shaky grip on editorial integrity and @Gamer will be ready-made for more of the same.

Also up for consideration is the very fundamental question of whether gaming magazines should be saved at all. Magazines traditionally offer a depth of coverage that websites, with their stick-and-move approach, typically don’t, and they’re also a lot easier to read while you’re sitting on the crapper or, you know, wherever. But as The Escapist itself has proven, the net can (and increasingly does) offer thoughtful, in-depth content, while the steady march of technology has quite literally put the Internet in almost every crapper in the Western world. (Or, you know, wherever.)

Magazines, meanwhile, are expensive, wasteful as hell and, compared to their digital cousins, move at an absolute snail’s pace, telling you everything you could possibly want to know about what happened last month. That’s great if you’re looking for an insightful analysis of the Kyrgyz/Uzbek conflict in central Asia, but not so hot if you want to know whether or not to drop a few bucks on the new Mass Effect 2 DLC.

The digital era has hammered the somewhat ironically-named Future. Circulation numbers are a fraction of what they once were and in a trading statement released in March, the company admitted that its complement of gaming publications were staring down the barrel of a “very tough market,” with advertising, particularly in the U.S., “remaining under pressure” for the foreseeable future. In other words, @Gamer is entirely Best Buy’s play. But given Future’s experience over the past few years and its decidedly bleak outlook, the obvious question is, why?

The inclusion of “exclusive discount offers” in the @Gamer experiment changes the formula up a bit but ultimately the core product remains essentially unchanged: Pieces of dead trees written on, stapled together and offered to gamers who have already moved on to the next loud, shiny thing. It may have some appeal to Best Buy regulars as a sort of high-gloss coupon book – pay six bucks for an issue and get ten off a game you were going to buy anyway – but if that’s the entirely unsurprising net result, wouldn’t it be easier to just make a straight-up coupon book for Gamers Club members and charge ten bucks a year to get in?

Maybe someone at Best Buy sees a niche the rest of us don’t. Maybe it’s a long-shot attempt at putting the company on even footing with GameStop as a first-choice destination for gamers. Or maybe the CEO is a guy like me, with a soft spot for magazines and a deafness to the occasional nagging question about how long he’s going to keep these things lying around when he never even looks at them anyway. Sharp business sense or soft sentimentality? I don’t think it matters. @Gamer may surprise us with its editorial independence and integrity, or it may turn out to be just a thinly-disguised advertising flyer. Either way, it’s nothing we haven’t seen before and in the end, the one thing it won’t be is our magazine Messiah. It is kind of sad, but maybe it’s okay, too.

Andy Chalk will give up his stacks of CGW and PCG when they pry them from his cold, dead hands.

E3 2010: Brutal-Looking New Twisted Metal for PS3 Real After All

Summer of Arcade: We’ve Got Lara Croft and Castlevania