After stumbling into our hearts with their distinct bean shape and terrible understanding of gravity, Fall Guys became one of 2020’s unexpected hits. What was even more unexpected was when we were given the chance to dress our little bean babies up as Sonic the Hedgehog. Or an Untitled Goose. Having cool skins in a game isn’t unusual, but having licensed costume collaborations celebrating so many different games certainly is. But when you are as popular (and adorable) as Fall Guys, it shouldn’t really come as a surprise.

“We get quite a lot of (collaboration) requests from different parties, and if it’s something we’re excited by or we think is a particularly good match for the game, then we pursue it,” said Rob Jackson, lead artist for Fall Guys at Mediatonic. “But we also go after licenses that we think would be a good fit.”

We have seen a diverse mix of character costumes introduced to the game so far, although the majority have come from Devolver Digital and Valve brands. So it came as quite a surprise when Jackson mentioned that some designs have originated from internal fan art.

“It’s a rarer occurrence, but sometimes dream collaborations come from within the team,” he said. “The Fall Guys are fun to draw, so quite often our artists (myself included) will draw ‘fan art’ collaborations of our favorite games and movies and then these get shared around internally or sometimes posted on Twitter. It’s never intended as fishing; it’s always done purely for the love of it, but sometimes the right person sees it and that evolves into something more.”

Once collaborations have been approved, the Mediatonic team undergoes a thorough process to translate the existing creation into the iconic Fall Guys style. After reviewing references and guidelines sent from the license holder, the team then gathers its own reference points to figure out “what aspects of a character are considered universally essential.” Once key features have been established, they are filtered through what Jackson describes as “quite strict internal rules” about the construction, level of detail, and colors, among others, that can be used in creating the costume.

Even with such a detailed process, crafting costumes that feel like they both honor the original designs and belong in the world of Fall Guys is still a considerable challenge, particularly in the case of one very cheeky goose.

“We’ve done animal costumes before, but the Fall Guy is distinctly un-Goose-like in its form,” said Jackson. “It was very tricky to get something that felt Goose-like while still obeying our general rules (although I think we bent one or two!). The developers, House House, were great though and provided really useful references and feedback. Together, we got something that I think works pretty well.”

With the team at Mediatonic constantly incorporating the work of others into their own, the seasonal updates provide the perfect opportunity to remind fans of Fall Guys’ identifiable style. The theme for the latest season, dropping later today, is Winter Knockout, which will feature a whole new range of levels and costumes. To ensure the new level designs fit within the Fall Guys world, the color palette is usually the first thing that is decided upon. “For Season 3, we went for a rich, candyfloss pink and icy blue with splashes of minty green,” said Jackson. “Then there’s a healthy dose of snowy white to pull it together.” 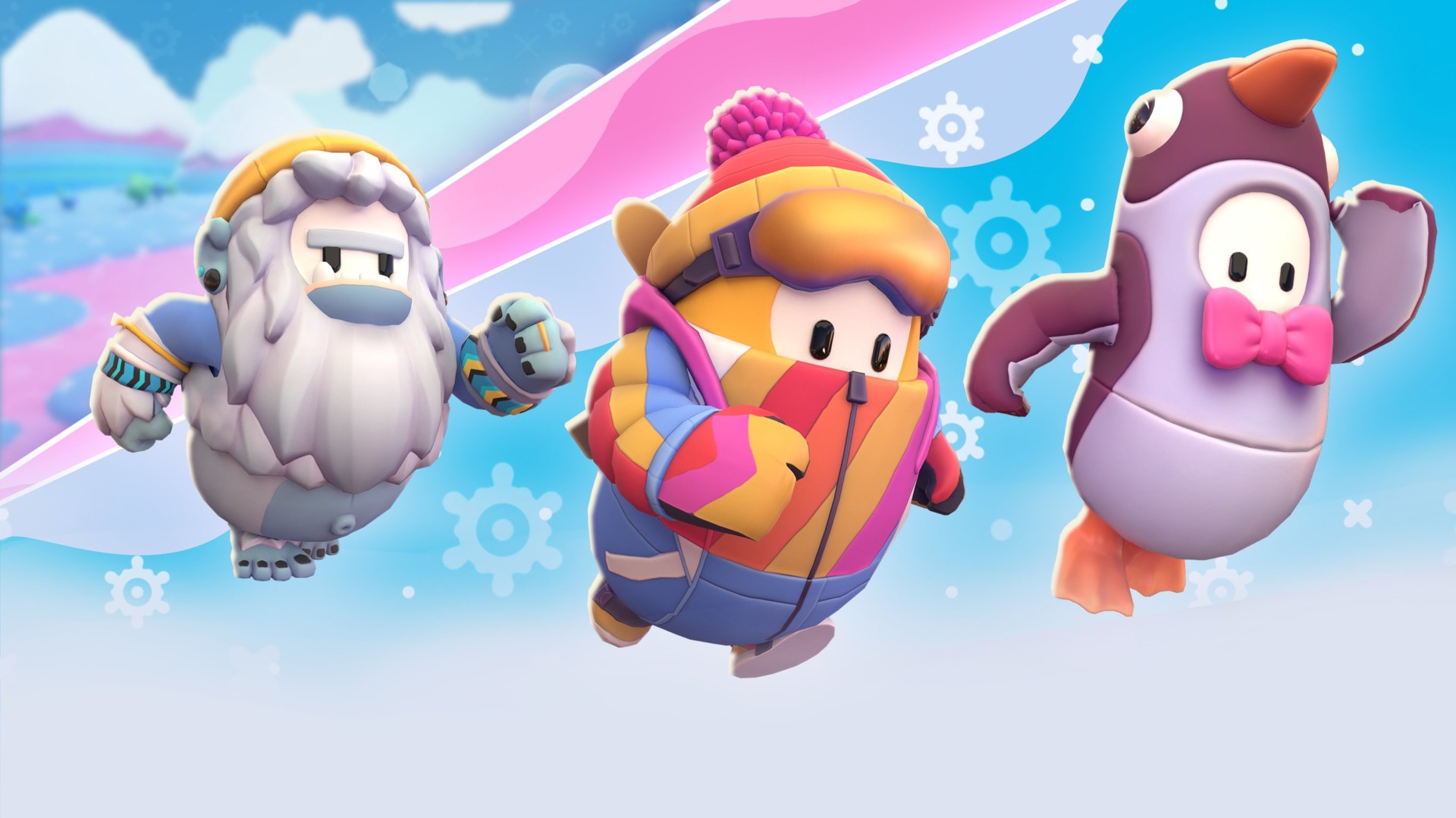 Crafting the costumes for the new season underwent the usual process, with a heavy focus on color. “For the bean base color options, I (as usual!) turned to desserts — in this instance ice creams,” said Jackson. “There are a lot of classic ice cream flavors represented in the selection!” In regards to the actual costumes though, Jackson mentioned that Winter Knockout will feature “a good mix of traditional seasonal costumes, winter sports, winter animals… and a few other surprises.” I, for one, hope to be surprised with an ice cream swirly boy.

As joking as my hopes for an ice cream-covered bean boy are, Mediatonic openly embraces feedback from its whole team and community. Jackson said of seasonal themes, “It’s often … inspired by comments and suggestions from the wider team (and our awesome community), and then we take those threads and run with it, usually in a few different directions until, as with the costumes, we have a nice selection of options to work into.” With that kind of attitude, the future of Fall Guys is wide open for more exciting themes and updates, with Jackson mentioning that in the future, potential collaborations may be integrated as part of the seasonal theme.

As exciting as the future of Fall Guys is, I couldn’t help but look back at past collaborations and, being the hard-hitting journalist that I am, ask one very important question: How did the Sonic costume come to be?

But VP of Business Development Josh Tarrant did:

We’ve been friendly with Sega for years, and ever since we started teasing Fall Guys, there have been discussions around collaborations. In the build-up to launch, they let us know about a promotion they were working on around the 60th anniversary celebrations.

The initial plan was to do more than just a Sonic costume as we wanted to celebrate their history as much as them, but sadly due to timings, we chose to focus on making Sonic as great as possible.

As one of our first IP costumes, it is pretty epic to start with Sonic! He is such a gaming icon and his chonky costume was incredible.

Tarrant also had an important message for Sega, which we will relay here: “Sega, if you are reading this… we want ToeJam and Earl in 2021.” Hopefully this is the start of another collaboration in the making.

In any case, to watch Fall Guys find so much success, yet still take the time to celebrate other games, is a testament to the love and passion that is poured into the game.

“When we made the game we had no idea that we’d have all these opportunities, so the very fact that we now have the likes of Gordon Freeman, Godzilla, and an untitled Goose (among countless others) running around together in a silly physics party game feels crazy,” said Jackson. “But it’s great! … It’s a celebration of all the things we love, and the fact that it all comes together in a game that celebrates joy and friendship (and crushing, humiliating defeat) seems pretty fitting.”