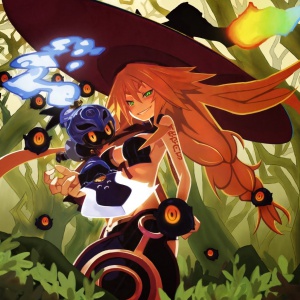 While a lot of attention is often directed towards the different trends in JRPGs versus their Western counter-parts, when it comes to JRPGs even they fall into some competing camps. As I see it, there are two broad categories. There are the JRPGs that focus on characters and story, and those that put the bulk of their attention on game mechanics, often to a staggering degree. Seeing as The Witch and The Hundred Knight comes to us from the same studio that gave us the Disgaea series with its infamous maximum character level of 9999, it’s no surprise that it falls firmly in the later.

This otherwise fairly standard action-RPG throws a ton of gameplay mechanics, stats and systems at the wall attempting to make something stick. You’ll run around, hit monsters, dodge attacks, and collect loot and experience like you’ve done in a hundred other games. However, on top of that, all these extra bits and pieces in The Witch and The Hundred Knight don’t ever come together as a seamless whole as well as other titles have. More often than not you’re left with the feeling that it’s just extra noise that at best can be simply ignored or at worst unnecessarily clogs up the game.

The central mechanic is Giga Calories, which is a timer, of sorts, on how long you can stay in the field. When you enter a new zone you’ll start with 100 Gcals, and every action – including standing idly – will consume them at a certain rate, while hitting zero Gcals will greatly debuff you until you regain some. When everything is going well it can largely be ignored, but it’s pretty frustrating to accidentally trigger a boss when you’re low on Gcals.

Giga Calories in-turn feeds into a number of the game’s other mechanics. Enemies can be consumed once they’ve been pummeled to a low enough life total to regain Gcals, but eating enemies will fill up your stomach with garbage items. This can be problematic since your stomach is where you’ll also store everything you find in the field until you return to base. In order to keep you from simply constantly returning home to unload your stomach and refill Gcals, there are also bonus points to consider. The more bonus points you accumulate, the better items you’ll receive at the end of the level. And then additionally there are grade points, which you can use to boost your stats, Gcals or bonus points for that outing.

At times it works together really well, giving you some clever interplay between the dueling mechanics all vying for attention. Attempting to maximize your time and efficiency in the field requires maintaining a careful balance, which can be satisfying to pull off. Other times it feels like the wheels are coming off the bus and the game is unnecessarily fighting with you and punishing you for exploring. If the game had simply stopped here it probably would have been better for it, but there’s still more mechanics and systems to account for.

In addition to enemies, there are plenty of other NPCs in the area, The Witch and The Hundred Knight straddles being open world with various villages dotting the zones. Every enemy and NPCs is governed by their Behavior Panel, a triangle that you can view by targeting them. The apexes of each edge are rage, fear and love, each of which will impart certain characteristics and buffs when they reach it. Hitting enemies, for instance, will often push them towards rage, but they will sometimes start to fear and run away from you. I’m honestly struggling to think of the time it really mattered, other than accidentally wailing on a docile NPCs and pissing them off. 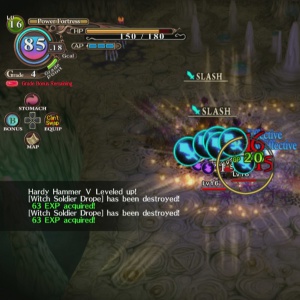 Every building, including item shops, that you come across can be entered normally or you additionally have the option to raid it. Buildings will have their own defensive value, and a little cartoon-esque scene of the house bouncing around will ensue when you do attempt a raid. Upon success you’ll receive a treasure, and returning to the building with grant additional items or boosts. Failing a raid will deduct a big chunk of your HP and Gcals though. This whole system might have been interesting if it didn’t feel like a chore to raid a whole village, since each raid takes about 1/2 minute to a minute of just watching the screen. I quickly went from raiding everything, to only hitting for only items I cared about and finally to not at all just to avoid the tedium.

But wait there is more! Attacking non-enemy NPCs and raiding buildings will accumulate karma, eventually making everything more hostile towards you. You can decrease your karma with Anima. What’s Anima? Anima is a rare drop off of enemies, and it’s used for everything from the aforementioned decrease in karma to upgrading your weapons. Said weapons can be arranged in sequence chains as you equip five weapons simultaneously in a row, and putting them in a proper sequence will give you bonus damage. Every weapon also has a damage type of slash, blunt or magic, and enemies will be weak or resistant to a mixture of them. Hundred Knight also has facets that you can switch on the fly that give various skills and weapon bonuses. You’ll also unlock Tochka, which are little allies that can be summoned…

And you get the idea. There’s nothing wrong with a game being complex. I personally rather enjoy games with deep mechanics, but eventually you’re just throwing increasingly more noise into the experience for little to no gain. It doesn’t help matters that while The Witch and The Hundred Knight starts out with one of the most hilariously hand-holding tutorial sequences, it doesn’t do a great job of reminding you what a lot of these functions and features are down the line.

The game otherwise plays well for the most part. The combat feels tight and responsive, but with so many things going on the screen is often a visual mess of numbers, bars and icons. The controls are certainly stressing the limits of the PS3 controller, and you’ll probably accidentally use some power when trying to react in the field since some controls require holding a shoulder and face button. Which can be particularly annoyingly when you meant to change a facet and instead engage a mode that increases your power while draining your Gcals faster.

Perhaps a lot of this could be forgiven if the story was great, but The Witch and The Hundred Knight fails to capture interest and at times dips into some uncomfortably troubling areas. You are Hundred Knight, a legendary demon summoned by the Swamp Witch Metalia to further her own goals. While you’re playing as Hundred Knight and occasionally get to make some responses, you’re otherwise a silent protagonist and Metalia is really the main focus of the story. Metalia is violent, foul mouthed and ill-tempered – you’re certainly not working for the “good guy” here – and you’re assisting her in spreading her swamp and killing everyone that gets in the way of that. On some level this is fun to watch, being cast as the minion to the villain is at least not not commonly tread.

That’s not where the game can get uncomfortable though. If it was just some of the cheesecake character designs it wouldn’t be that bad, Metalia for instance basically wears just a halter top and bike shorts and her default pose in conversations has her leaning over with cleavage front and center. It’s some of the other moments where the game crosses the line. It attempts to make light some of sexual situations, which it doesn’t always land firmly enough on the humorous side of the fence on. There’s even these succubus-esque monsters in skirts whose death pose it to lay out spread eagle. It’s just not doing the game any favors.

Bottom line: If any one element of The Witch and The Hundred Knight had been truly great, you could look over some of its warts, but without any strong focus its just a bog standard action RPG that’s artificially attempted to be made interesting with tons of superfluous gameplay mechanics tacked on.

Recommendation: Unless you are the most ardent NIS fan, you can give this a pass.

Say Hello To My Little Friend!

Titanfall‘s New Game Modes Will be Free For All Players