Three weeks ago, when composing a review for The Losers, I found myself in a critic’s conundrum: I had nothing to say. The movie wasn’t just bad, it was boring, and I’d exhausted my supply of witty observations only to find myself running a bit short for time and devoid of anything much interesting – at least from my perspective – for the viewer to chew on.

Long story short, I decided to tack a post script relating to the previous week’s review of Kick Ass on to the beginning, relating to a contention of mine that the character of Hit-Girl can serve as evidence that kid sidekicks in superhero movies aren’t as bad an idea as everyone has been conditioned to accept that they are. Or, in summary, I’d like to see Robin turn up in the next Batman movie. My operating logic was simple: nobody seems to care about The Losers, people do seem to care about the then week-old Kick-Ass, everybody seems to care about the next Batman movie.

That episode drew about 160 comments in the The Escapist Forums. Of that 160, about 130 wanted to talk about the under-one-minute bit about Robin, as opposed to the several minutes devoted to The Losers. Of that 130, I think all of two people didn’t think I’d taken leave of my senses. I’d be lying if I said I knew (or even figured) that the response would be any different if I suggested the same in any other context. It’s a running theme when it comes to my relationship with the Batman movies: Everyone hates Robin, except me.

Why am I alone on this?

Granted, I’m the guy who wants more color ‘n’ crazy when it comes to genre film and superheroes in particular. If Warner Bros. handed me $100 million and final cut, the first thing you’d see in a new Superman movie would be Krypto the Superdog (he wouldn’t talk, though). But Robin isn’t just some random offbeat side character, he’s the second most important figure in the Batman mythos! The only fixtures of Batman that have been around longer are Alfred and The Joker.

Well, let it never be said that MovieBob doesn’t relish the opportunity to explain himself. Here’s what I’ll call three good reasons that the Boy Wonder ought to turn up in the next Bat-film, although hopefully they won’t call him that.

To my mind, this is probably the most prominent rationale anyone could make: Robin is one of the key components of the Batman franchise, and has been for about 99% of its existence. Batman is about 70 years old, Robin is about 69. Do the math. You wouldn’t make a Sherlock Holmes movie without Watson, right? King Arthur without Merlin? The Lone Ranger without Tonto? And if you did, it would be patently obvious that their absence was temporary or plot-specific – you wouldn’t simply leave them out.

And yet this has been the default approach for Batman adaptations in the modern era, mostly owing to the period in which they started up. The original run of big-budget Batman movies ran concurrent with the 90s, the era when comic publishers first fully realized there was a (temporary) goldmine in tailoring the material toward 30-something hardcore fans rather than the younger audience that had typically sustained them. “Grim ‘n’ Gritty” books doing weak imitations of Watchmen were in, anything that reminded “mature” fans of the material’s inherent juvenility were out … so if you’re trying to re-imagine the Caped Crusader as a one-dimensional Ball-Of-Angry, the humanizing element of a teenaged sidekick is the first thing you ditch. (For those keeping track, the Grim ‘n’ Gritty 90s had the secondary effect of essentially destroying the American comic book industry.)

So, I get it. Thanks to the Burton movies and their subsequent ripple effect, there’s basically one or two generations of fans for whom Batman has always been this solitary character while Robin is this other thing that doesn’t quite fit, but keeps turning up anyway. I get that, I just don’t agree. Batman existed as an on-his-own character for barely a year before the first Robin turned up, and he’s been around in some form ever since. Batman and Robin are the franchise, and even in the best of cases (read: The Dark Knight) I can’t help but feel like there’s an awkward empty spot somewhere to the left of Batman where the Boy Wonder ought to be standing; his absence is as palpable as would be the absence of Alfred or the Bat-Signal. 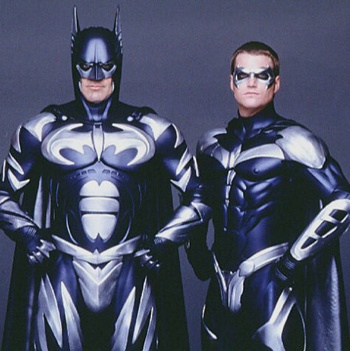 Theoretical question: Aside from playing “guess the villain,” where do you expect the story of the current Batman movies to go after Dark Knight? Hell, where can it go?

Despite the upbeat (for a Batman movie) music cue and the hopeful narration from Gary Oldman, TDK ends on the most downer note possible: The bad guy won. Yes, fine, those people on the boats did the right thing(s), but Joker’s broader scheme to undo order in the city and (more specifically) to prove that his “everyone is one step away from being ME” philosophy was correct by flipping Harvey Dent’s crazy switch was an unqualified success – to the extent that the only way to avoid Armageddon is for the good guys to lie and pretend that they won via Batman framing himself for multiple murder.

Looking at that, does anyone think the sequel is simply going to skew darker? I mean, the only way it could even get darker is if the movie ends with Batman slitting his wrists in the bathtub while listening to a vinyl of Die Fledermousse.

Now, I could be completely wrong, but it seems logical that Batman 3 will probably be about Batman coming back from the brink. Some kind of redemption, stabilization, personal growth story. Y’know what’s good for redemption? Transitioning from one’s own personal quest for vengeance to helping someone else. This couldn’t make more sense from a character perspective: Bruce Wayne’s issue is essentially arrested development – his emotional growth stopped when his parents died, and Batman is basically an adult-sized ten year-old boy taking out his angst on random muggers. Having to get over himself and move from being an angry kid who misses his daddy to a present father-figure to a real kid is the stuff of genuine character development. (Not that it’s exactly the same thing, but remember how well the dynamic of Bruce Wayne and a younger hero-in-training worked for Batman Beyond?)

Plus, on a more practical/mechanical level, he could potentially solve some of the nagging issues of the franchise (yes, even TDK.) A younger, more agile partner with an acrobatics background would add dynamic oomph to fight scenes that – let’s face it – aren’t exactly terrific thanks to the insistence on the armored Batsuit look. He gives Batman someone to talk to in person instead of always being on the Bat-Bluetooth with Alfred. He lets you extend the reach of Batman’s presence throughout the story without Batman himself having to always show up, which helps blunt the problem of Batman sometimes seeming like the lone weird visitor in an otherwise ordinary crime movie. And, not for nothing, but would it be so bad for there to be one person in these movies who acknowledges that superheroism is, y’know, fun to do? 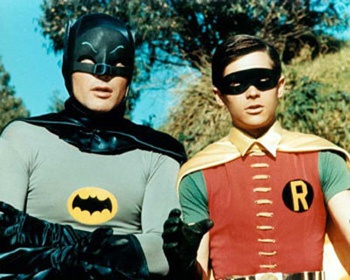 I say again: Part of what made The Dark Knight such a great work was that it was willing to go all the way in its commitment to the downbeat – the bad guy wins, the love interest dies and the good guy winds up a wanted felon on what amounts to a suicide mission. Since you don’t get much darker than that without sending Batman off to fight that guy from The Human Centipede, is it fair to wonder if TDK is the peak for grim, pitch-dark superheroes?

Consider: In the same year that Batman was reaching this (potential) nadir of gritty angst, the rest of the genre was taking its first steps in the opposite direction with the breezy, gee-isn’t-this-stuff-fun Iron Man and the unapologetic paean to adolescent monster movie worship that was The Incredible Hulk. Set to follow are films based on Captain America – a regular Mr. Sunshine – and Thor – a swords and sorcery pic. And, of course, The Avengers, where all these colorful oddballs will be hanging out together.

On TV, Batman himself headlines The Brave & The Bold, a love-letter to sunny, Silver Age DC adventure stories, and on the comic side line-wide events like Marvel’s Heroic Age and DC’s Brightest Day are launching with the specific purpose of bringing the joy and glory back to the cape and cowl set. That Captain America movie I mentioned? They’ve opted to keep Bucky Barnes, their equivalent to Robin, while rumblings from the gaming world suggest that Robin himself may turn up in the sequel to Arkham Asylum.

Maybe it’s time for Robin? Maybe the pop culture pendulum is swinging back away from “Grim ‘n’ Gritty” to quirky and colorful? Is Batman’s third outing going to be ironically behind the times when it finally comes out – like people who sold off old Nintendo stocks right before the Wii came out? I’m picturing Captain America knocking back brews at a party, boastfully regaling his entourage with tales of recent success: “Y’know what’re great? Teen sidekicks! Your action gets better, you have someone to shoot the breeze with, can’t go wrong! Bruce knows what I’m talking about, right Bruce?” – and Batman is sitting over in a booth grumbling about firing his agent over a rum and coke and a plate of sliders; wistfully watching Kick-Ass on his Bat-iPhone and wondering why even Iron Man can move around in-costume better than he can …

… alright, that might be pushing it. But you get the idea.

Does the Fable III Box Art Confirm a PC Version?