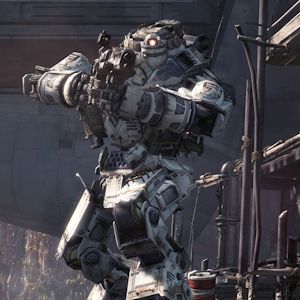 Many games claim to be the most anticipated release of their given year, but very few have a justifiable reason for making such lofty boasts. Titanfall is one of the rarities, backed as it is by a hype train of almost ludicrous proportions. Thanks to savvy marketing and the giddy drooling of videogame media, Respawn Entertainment’s debut shooter is swaggering onto the scene with the kind of presumptuous goodwill usually reserved for more venerable franchises.

Of course, the big question needs answering – does Titanfall live up to the hype? In a word, no. No it does not. How could it? This game has been called exemplary, untouchable, even revolutionary. Expectations have been built so high as to be unrealistic, and I can quite safely say that, no, you should not believe the hype.

That said, just because a game fails to live up to the sheer fantasy that has been erected in its pre-release build, that doesn’t mean it isn’t a damn fine game.

While it boasts no single-player action whatsoever, there is a two-sided campaign to Titanfall, telling the tale of a conflict between the Militia and IMC – two rival factions that are battling over … something? They’re after fuel at one point, then there’s a lot of shouting and I kind of got lost because I was too busy shooting gigantic robots with my big rocket. Attempting to tell a story within the context of a multiplayer-only shooter is problematic for a number of reasons, not least the fact that it’s hard to concentrate on, or even care about, the plot details unfolding while you’re attempting to focus on an intense team-based battle. Brink, a last-gen game that attempted a similar narrative structure, suffered from the same issues, and Titanfall does nothing to combat them.

It scarcely matters, as writing isn’t exactly this game’s strongest feature. The few plot details that surfaced for me were derivative, and the game’s most dramatic moments meant very little as the characters involved were fairly alienated from the actual onscreen combat. They warbled on about their struggles and their personal feelings, but such things had little impact on my own dealings. In many ways, it’s like you’re watching Rambo in one room, while somebody else is watching The Bodyguard in the next room with the volume turned up too loud. You can substitute my movie examples for any of your personal choosing. Krull is a good movie.

Titanfall‘s world simply isn’t very engaging. From a visual design standpoint, it’s a fairly bog-standard wartorn future setting, with an archetypal military force fighting against an archetypal people’s army. What it lacks in originality, however, it makes up for in flair. There’s no denying that Respawn has some style, and while the world itself is visually quite banal, the direction – with its breathtaking pre-match vistas, impressive sense of violent chaos, and excellent soundtrack, adequately shoulders the burden of drawing the player in. Sometimes, it’s okay to have more style than substance, and Titanfall pulls that off with gusto.

Of course, being an online-only first-person shooter, there are far more important concerns than narrative and scenario. Detractors have described Titanfall as “Call of Duty with mechs,” but personally I see no insult in that. For the most part, this game is Call of Duty with mechs, and I have zero problem with that. In fact, it’s kind of lovely.

When playing this game for the first time, one may initially wonder what all the fuss has been about. Armed with fairly standard weaponry, from assault rifles to shotguns to SMGs, players are thrust into a fairly bog standard military shooter with an uninspiring futuristic overlay. You run, you gun, you rack up points and level up your little soldier, unlocking more guns, and attachments, and grenades. It’s not long, however, before the bells and whistles make themselves known, and something a little more special reveals itself.

First of all, the overall sense of chaos is palpable. NPCs litter the battlefield, with common grunts and robotic Specters fighting each other, even engaging in little one-on-one scripted tussles. These common peons can all be fought by the player for extra points, and are especially crucial fodder when playing the Attrition game type (a match in which the opposing team’s forces must be steadily drained). Then there are all the little traversal boosts – a jetpack that allows one to double jump, the power to sprint across walls, a personal cloaking device. Fun features that, on their own, aren’t too different from things found in plenty of other games, but combine to create an FPS with some extra flavor.

The inclusion of NPC opponents, not to mention such useful armaments as the auto-locking Smart Pistol, make for a game that’s remarkably welcoming to newcomers, while providing enough depth in its environmental navigation to satisfy veteran FPS fans. In my experience with the game, fresh-faced players have been able to square off against highly leveled hardcore obsessives and and have a good time, and while there are obviously infallibly excellent players already dominating servers, even the very worst of players can find some CPU-controlled chumps to beat up on and make themselves useful. 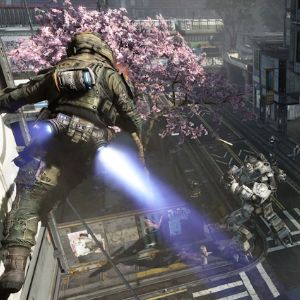 During the course of the game, players can also earn Burn Cards – one-use items that grant one special perk for the duration of a spawn. These can be anything from “Amped” weapons that deal extra damage, to prosthetic legs that make pilots extra speedy. Tons of cards, with varying rarities, can be unlocked, though their limited usage makes each one a valuable asset.

There’s a tremendous sense of speed that Respawn has deftly evolved from its Call of Duty heritage. Running, jumping, and parkouring around the field of war is swift, as is returning to battle after getting shot in the face. Visual information assaults the player’s eyes at a rapid pace, almost becoming overwhelming, while choke points and hot zones shift around the map with fluidity. It’s a game that demands attention, but is often so busy that it’s sometimes difficult to stay focused.

The titular falling Titans of Titanfall are, as one might expect, the stars of the show, and they’re not just reserved for the best players. Everybody has access to their own personal walking death machine, which can be called down from the skies at timed intervals. Like the player’s human avatars, these Titans can all be customized, with three unique chassis frames and a variety of weapons – from chainguns to rockets to railguns – with which to deal all manner of pain. The switch from ground (or rooftop) level personal combat to stomping metallic anarchy feels shockingly natural, not least because you can hop out at any time, let the Titan automatically romp around, and jump back in whenever you want – provided it’s not been blown to pieces by the opposing force.

As well as piloting a Titan, allied players can hitch a ride by clinging to one’s shoulder. Enemy players can do the same, able to rip a section of the mech’s armor off and blast away at a weak spot. In those rarest of occasions, a Titan may even be called down upon a foe’s Titan, utterly destroying it. I’ve been a victim of this. I have not done it. I probably never will.

At heart, Titanfall really doesn’t do anything that other shooters haven’t at least attempted. Where it stands out is how sensibly it’s all tied together. Whether you’re hacking enemy Specters to build your own little robot squad, or jumpkicking opposing pilots in the face, you get to experience dozens of little touches that make a big difference overall. No, this game is far from the “revolution” that excited critics have eagerly claimed it to be, but it is a wonderful little example of how fresh a standard shooter can feel when you pour all sorts of extra garnish over a solid foundation.

Graphically, this is a very pretty little game, though the Xbox One version suffers from some unfortunate screen tearing that really wasn’t doing my eyes any favors. Animations of story-based characters are a little stiff and wonky, but the animation in all other regards – especially when it comes to interaction between pilots and Titans – is impressive.

If Titanfall excels at one thing, it’s map design. Each map is intricately designed to take advantage of the navigational tools at the player’s disposal. Walls and windows were made to run across and jump through, rooftops add a verticality to combat, and there are lots of open spaces for Titans to roam. Each arena is large, but not so huge that one will be stuck wandering for long. A massive amount of thought went into these environments, and it shows.
As far as online stability goes, my time with the pre-release public servers has been fairly good. I’ve experienced very minor connection issues, and I had one complete crash after the game’s audio completely cut out. This is an Electronic Arts game, but Microsoft’s servers are taking the strain of the launch. With Xbox Live able to handle the game’s ginormous beta weekend, one can expect this won’t go the way EA’s other online games have gone lately. Fingers crossed!

Whether you pick it up now or wait for the launch to die down, you’re almost guaranteed to have a great time. I blasted through almost thirty matches in a straight row during a marathon session and really didn’t get tired of it. The accessibility keeps investment light, while the ever-changing sway of battle keeps one hooked. Oh, and muting fellow players is incredibly quick and easy, which is terrific, because it’s full of racists, idiots, and dudebros already.

Bottom Line: No game can live up to the level of hype foisted on Titanfall, but few games can be this hyped and still satisfy the end user. Respawn Entertainment most certainly satisfies, providing a solid shooter with a laudable amount of unique extras draped over a durable and familiar framework.

Recommendation: Does punching a robot with your robot sound like a good time? Prepare for Titanfall.