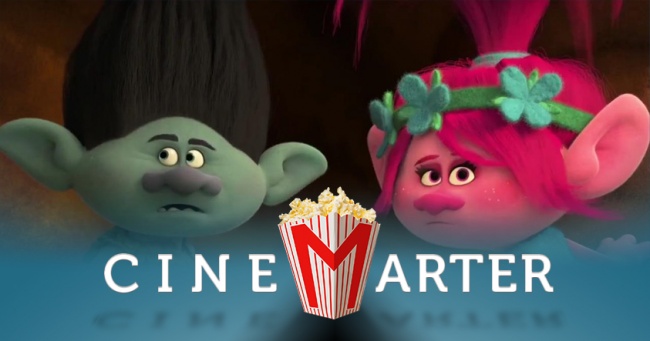 Trolls, the latest marketing movement masquerading as a movie, is a colorful, song-filled experience that perhaps isn’t as bad as we all feared it would be. That might feel like the faintest praise possible, and it is faint, but given how low my expectations were for this movie, seeing it be successful in any area is a surprise. I found myself actively enjoying parts of it – mostly the impromptu music videos – and by the end of it I wasn’t especially upset that I had spent 90 minutes watching it.

The story has been basically given away by the trailers, but in case you refuse to watch them, here’s the gist. A bunch of Trolls live in the forest, having escaped from the evil Bergens 20 years earlier. But a Bergen finds them and captures some of them, so the perpetually happy leader, Poppy (voice of Anna Kendrick), and the miserable Branch (Justin Timberlake), have to go to the land of the Bergens in order to rescue those who were captured. Songs, hijinks, songs, heavy-handed messaging, and songs ensue.

Why do the Bergens want the Trolls? Well, you see, the Bergens are unable to be happy without eating the Trolls. They used to do it once a year – “Trollstice,” they called it – but since the Trolls’ escape, they’ve lived in a constant state of gloom. The Bergens are basically humans. They need to consume these trippy creatures – who are happy, colorful, defy the laws of physics, and often singing – in order to experience joy. Wait. Hang on just a second here. Is Trolls about drugs? I think DreamWorks turned their movie into a big drug metaphor. Its main character’s name is “Poppy” for crying out loud!

And, of course, since this is a movie for children, the main message is that you don’t need to consume the Trolls (drugs) to be happy. There’s happiness inside of everything; you just need it brought out. For Branch, he regains his happy (drug-like) state by hugging other Trolls. So, he mixes with them, like a drug that was cut too thin and you had to put some pure substance back in to make it worthwhile again. Am I thinking too much about this? Probably, but I’m sticking with it! It makes as much sense as other fan theories out there.

Trolls is a simplistic movie that is well-animated, filled with energetic pop songs, contains a few creative sequences, and has a message that it delivers frequently and in very heavy-handed ways.

The rest of the movie? It’s a generically plotted movie whose story is often stunted in order to sing a pop song. Thankfully, the filmmakers hired actors who could sing, which makes the songs a more-often-than-not delightful experience. The music videos accompanying them are inventive and colorful, too. Sure, if you cut out all the songs you’d have about 30 minutes of story, but that’s true of all musicals. However, “Can’t Stop the Feeling” is the worst thing the movies have given popular culture since “Happy.”

The running time does feel padded, though, by a Cinderella-esque subplot involving a scullery maid (Zooey Deschanel) who uses the Trolls to dress up all fancy-like in order to impress the Bergen king, Gristle Jr. (Christopher Mintz-Plasse). It’s not the worst thing in the world, but it’s been done so often and ultimately has such little bearing on the film that it feels tacked-on.

Trolls is well-animated. The character designs are fine, there’s a lot of color and creativity put into almost every scene. You compare Trolls to something like The Wild Life or Norm of the North and there isn’t even a question when it comes to the quality and effort put into the various films. It was a surprise to me that only a couple of the Trolls wound up annoying me, as I suspected almost all of them would. Even Poppy, who is happy for 98.62% of her time on-screen isn’t that bad. Nor is the unhappy Branch. It’s only a couple of the supporting characters who begin to get on our nerves, and they don’t have enough screen time to justify much anger.

Trolls is a simplistic movie that is well-animated, filled with energetic pop songs, contains a few creative sequences, and has a message that it delivers frequently and in very heavy-handed ways. It also may or may not be a drug metaphor, and I choose to believe that it absolutely is, because that would just be incredible. Even if that theory doesn’t completely hold up, neither do all of Zootopia‘s metaphors. So there! Anyway, Trolls isn’t particularly interesting (outside of the drug stuff), but it’s not bad and not a waste of time, either. It’s kind of fun.

Bottom Line: Trolls is far from the worst animated film out there. In fact, I had some fun with it.

Recommendation: Want some perpetually happy creatures singing and dancing and hugging for 90 minutes? Trolls is your movie.

inb4 “What kind of drugs did you take before writing this and where can I get some?”