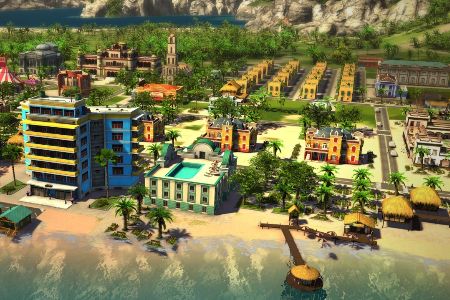 Tropico 5 is the newest entry in the cartoonish caribbean city-builder series from Kalypso. In Tropico, you’re the ruler of a fictional Caribbean island from the 19th through into the 20th century, from colony to independence and beyond. Whether you rule benevolently or violently, you establish a dynasty that lasts as you create a functioning economy and enrich yourself. Over the years, the series has shed its most confusing and frustrating aspects in favor of gently streamlining the core of the game. That process has led to a progressively better and better game, but one that tends not to add too many new features with each installment. That’s about what you should expect with Tropico 5, which has reached a place where players who want a casual city-building experience in a relaxing environment can have that. That’s not to say the hardcore management sim aspect is gone – it’s still there, and this is a Kalypso game, after all. The hardest difficulties will chew you up and spit you out, gleefully disposing of tens of hours of your playtime because you made a simple mistake.

The game’s tone is an attempt at lighthearted satire somewhere between overblown stereotype and mildly offensive joke. It never gets too serious, but there’s a painfully sharp edge behind some of the rather dated humor in this one – like a vaguely worded Brokeback Mountain joke that sounds more like something your politically incorrect neighbor would make than something that belongs in a cutting dictator satire. Either way, the rest of the game’s aesthetics and features are great. The writing can be pretty funny, even, when it’s not being uncomfortably or offensively stereotypical. The graphics look quite good on a high end PC. The music is, as usual, just incredible. The mix of latin jazz and dance music is superb, well curated, and varied enough that you’ll come to love particular tracks and want to pause for a dance break when they come up. The only real downside to the looks of Tropico 5 are that there are less customization options for your dictator’s clothes than there were in Tropico 4. It didn’t bother me.

Most of your time in Tropico will be spent deciding which buildings should be built, and where, and what things your economy is producing and what it should be producing next. You’ll do lots of construction and management, setting the budget levels of priority buildings to make sure that the right citizens are making money, and giving the buildings you’re focusing on good managers to ensure their effectiveness. This process is all streamlined from Tropico 4, and you won’t have annoying problems getting buildings built and resources transported. Resource management, instead, is where you’ll spend time thinking. You’ll look at your logs a lot, seeing what you’re producing and how much – and then looking at what trade routes you can use to increase your income and accomplish your objectives. 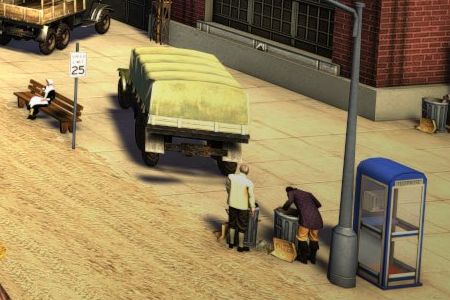 The only two annoyances that haven’t been solved in this game are combat and information density. Tropico still hasn’t got quite the quick-and-easy information availability of a game like Civilization V, and you’ll have to open pages of information to see political states, exports, and other details. Building details are available without leaving the city view proper via convenient side panels, and that’s great. In the end, the information you get from the game’s almanac screens is vital, and it’s a little frustrating to have to go in and view it there, but realistically that seems like a hazard of the genre at this point. If you’re interested in this kind of game you likely won’t mind it. Likewise, you’ll often consult the game’s citizen happiness charts to improve your approval ratings – that’s pretty straightforward, with 1-100 scores indicating how well you’re doing. If you want info about specifics on your religion score you can click through and find them, but most players will do fine just knowing they should build another cathedral.

Combat, on the other hand, is just as frustrating as Tropico combat has ever been. You create buildings that spawn your military forces in the event of an invasion or uprising, and they automatically fight for you. What this means is that sometimes you’ve built enough, and they do their job and move well and you win. Simple as that. Also, sometimes your military forces get weird, scattered AI direction and picked apart by a clumped force twice their size. You have no control over this. It will be the cause of some save-scumming on your part.

The game’s new eras are a welcome addition to play, with each giving an interesting objective and flavor to what you’re doing as you move through the stages of city expansion. In the early game you’ll be building through the colonial era, a race to kick off a revolution before your term as governor expires. You then settle into the world wars, a balance of appeasing the Axis & Allies respectively, lest one or the other invade your country – or you can throw that out the window, ally with one for massive benefits, and fight off invasions from the other. Cold war is a similar scenario, but with striking the balance being a much more favorable option. From there, the game goes towards the modern era and the unknown future, each with their own twist on play. Each era does have its own unique suite of missions to complete, and those are a welcome addition as they give your expansion and play welcome structure in the otherwise loose sandbox mode. The campaign is structured to go along with the eras, and isn’t as much an interesting story as it is a greatly extended tutorial intro to each era’s unique mechanics. Play it, enjoy it, and then move on to the game’s deeper sandbox.

Multiplayer is a bit confusing, but is a curious twist as you compete with others for limited space. It has the absolutely wonderful benefit of using every mechanic from single player – there’s no relearning how to play the game for the online environment. At launch and just after, though, the multiplayer servers were a bit slow or choppy at peak hours – meaning sometimes a dropped connection will ruin a match. Cooperative play is an absolute treat, with hours of fun coming from working together with another player to build an island.

Bottom Line: A solid, accessible city builder, Tropico 5 gets out of the way and lets you have the fun you came for without pissing around in fiddly details.

Recommendation: A no brainer for Tropico fans, Tropico 5 is also a good jumping-on point for those who’ve always been curious about the series.

Sony is Making a Sonic the Hedgehog Movie