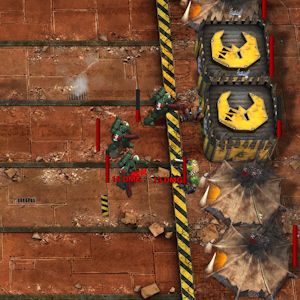 Lane strategy games must feel like easy money to those developers concerned only with easy money. Popularized by Plants Vs. Zombies, the simple structure of a game in which two sides automatically attack each other while the player places things on linear paths makes for some damn easy design. This is not to say lane strategy games are the exclusive domain of hack developers, but it is a genre in which the hacks are easy to spot.

While Plants Vs. Zombies provided variety and a sense of urgency, not to mention endearing and energetic visuals, more contemporary efforts provide the mere basics, usually with some cash-in license attached. Warhammer 40,000: Storm of Vengeance is one such game – and as a bonus, it’s a reskin of an earlier release, Samurai Dogs VS Ninja Cats. All Eutechnyx (the studio guilty of Ride to Hell: Retribution) has done is gaudily daub Games Workshop’s imagery over the existing software.

Telling a story with nothing but dry text and static images, this simultaneous mobile and PC release revolves around the Dark Angels Space Marine chapter as they fight against the Orks. Recreating the magic of the tabletop wargame (I am lying when I say that), the battlefield is divided into five straight lines, with the player sending their Marines across one side and the computer doling out Orks from the other.

At the end of each lane, one must place various buildings to generate resources and create more units. Comms beacons are required to generate Redemption, because Eutechnyx couldn’t think of an actual currency, and Redemption is used to field Marines created by Drop Pods, Ravens, and Rhinos. Drop Pods build standard Tactical Marines, Ravens provide close-combat Assault Marines, and Rhinos are used to make long-ranged Devastator units.

Battles are fairly remedial, offering little in the way of nuance or even basic thought. Place your buildings, wait on timers in order to throw out Marines, then sit around and watch as they automatically trudge toward the enemy buildings and fight incoming greenskins. If three buildings are destroyed by the opposing side, the fight is over.

There are some limited tactical options, though “limited” is most certainly the operative word. Special abilities can be used by generating another resource, Resolve, which one gains by ceasing unit production on Drop Pods, Ravens, or Rhinos. These special abilities can erect protective towers in a lane, summon a Marine on an attack bike, or empower a soldier to keep fighting even if he loses his hit points. By leveling up and spending skill points, players can also build basic troops with new equipment such as grenades or healing prayers, as well as unlock new Resolve powers. If you get enough of these, you can almost feel like the game is adequately interactive.

The biggest problem with Storm of Vengeance, outside of its blatant laziness, is how swiftly formulaic it becomes. As with all poorly conceived lane strategies, once you’ve worked out a winning combination of buildings, every level becomes a repeating process. You place down the one set of buildings you like, click on all the things at the preordained time, and let the battle play itself out. The lack of level variety and troop types, not to mention the ceaselessly recycled environments that never offer a single fresh twist, gives players absolutely nothing to return to.

Every now and then, the game attempts to be different, introducing stages that limit your resources or hand out a preset number of troops. These stages are no less a process than regular levels, however, as there’s one “right” way to beat them, and once you’ve figured out the trick, it’s just another case of mindless busywork, work that only feels more limiting in its contrived restriction.

If the regular game becomes crushingly dull – and it will – you can try to make things more exciting by selecting Hardcore Mode, a mode that sometimes selects itself without telling you. This makes the game unplayable, as the Ork side spits out soldiers at an impossible rate, overwhelming the Dark Angel side within seconds. Quite why this mode exists is beyond me, but at least it makes the game mercifully short.

There is multiplayer, but who cares?

In terms of providing fan service for Warhammer 40K fans, Storm of Vengeance manages to fall impressively short. With its uninspired music, lack of atmosphere, and sluggish combat animations, the 40K overlay feels vapid and desperate. Space Marines flail silently at Orks who return the mute slaps with their own limp shudders, occasionally rambling about purging “xenos” with all the enthusiasm of a dying man (the man is dying of Being Too Unenthusiastic Disease).

There’s nothing close to resembling a soul in this little project, it’s as cynical as a licensed product can be.

Bottom Line: A heartless reskin of an already dull game, Warhammer 40,000: Storm of Vengeance is a mediocre “me too” clone with a brand name shoddily bolted to itself.

Recommendation: Sleeping is a better use of your time. Have a lovely little sleep.

Hearthstone is Now on iPad