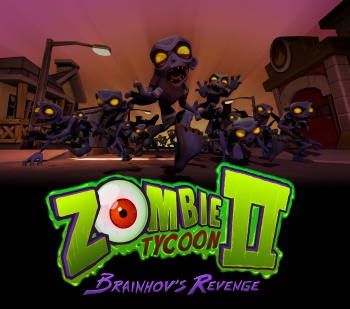 There are a great many zombie apocalypses in our popular media, especially when it comes to videogames. We’ve seen so many variations of undead shamblers, fast-moving runners, and otherwise mutated specimens that they’ve all become conventions and tropes in their own right. The genre still has life in it (so to speak), but being constantly inundated makes unique perspectives all the more refreshing. Zombie Tycoon 2: Brainhov’s Revenge is one such attempt, revisiting the RTS gameplay of its PSP original on the PS3 and Vita. Frima Studio’s charming and engaging take on zombies is fun to play, but does suffer drawbacks in translating RTS gameplay to the living room console.

Zombie Tycoon 2 is set in a universe where mad science created Formula Z, a substance that turns living creatures into undead slaves. Following the events of the first game, former scientific assistant Orville Tycoon has successfully unleashed his zombie army on the town of Finkleville as part of a larger goal of global domination. At the cusp of victory, Tycoon’s forces are suddenly obliterated by the equally ravenous hordes of Brainhov, his now-rotting-but-still-intelligent former employer. Reduced to nothing more than a laser pistol and his world-conquering ambitions, Tycoon immediately sets about rebuilding a zombie empire, slowly taking back the ruins that should be his.
Right off the bat, the first thing one notices about Zombie Tycoon 2 is how it blends humor with the unsettling conventions of the zombie apocalypse. The world is in chaos, swarms of zombies chase lone survivors, and Finkleville’s roads and infrastructure are in dire need of repair. Frima Studio could have played this apocalypse straight, but instead it lightened the mood with exaggerated caricatures of traditional zombie tropes. Civilians are gaunt, wide-eyed, perpetually shaking, and often screaming in panic. Zombies move in ravenous packs, but are literally and metaphorically brainless, frequently missing the intellectual subtleties of Tycoon’s orders. Tycoon, meanwhile, looks like he just walked out of a 1950s science fiction movie, with a lab coat, ray gun, and no greater motivation to conquer the world other than that it exists. It all comes together to provide a charming aesthetic in the tradition of Plants Vs Zombies, even though the apocalyptic setting is prominently displayed at all times.

Tycoon (and Brainhov in later chapters and multiplayer) can control up to two squads of ten zombies, a heavy monster unit, and a mobile base that spawns replacement units. While four groups sounds like a pretty small zombie apocalypse, rest assured, you have a much larger horde to draw from. Scattered across the level are houses belonging to an enemy faction, either human or zombie. Each captured house spawns additional NPC zombies that stand guard, attack enemies, or wander next door to claim additional buildings (and the neighbors). Most of the time, these zombies tend to their own affairs, but activating the Dead Rush command summons all of them to your latest target as a single enormous mob. After painstakingly navigating a map to expand your influence, it is immensely satisfying to watch your undead hurl themselves en masse against unsuspecting enemies and obstacles. Even if you aren’t especially interested in developing a horde, it’s a good idea to capture buildings anyway. After all, enemy units also spawn from those houses, and swarms can just as easily be used against you. 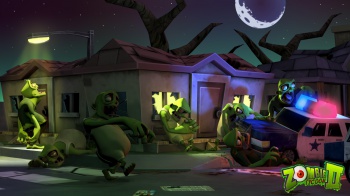 In most maps, Zombie Tycoon 2 challenges you with growing your undead army, capturing enemy territory, and eventually surpassing your adversaries. Frima’s decision to bring RTS gameplay to PSN seems a little odd given how unwieldy console controls can be for unit management and strategy. Frima mitigates this somewhat by simplifying the control scheme and trimming the strategy gameplay to its core elements. On the control front, commands for each group are bound to a single button, allowing you to quickly assign locations or targets without activating individual units. Your forces also automatically attack in-range enemies, saving you the trouble of manually assigning targets. Meanwhile, traditional gameplay elements like base building, resource gathering, and specialized units are combined using building captures. Each structure you secure provides benefits to your team, such as the aforementioned zombie spawns, decreased fog of war, or turret defenses. Some buildings even let you change the characteristics of your squads, providing access to zombie engineers, fast-moving samurai, poisonous hazmat experts, and more. Not only do these zombie types add variety and specialization to your units, they also add to the ludicrous amusement of Zombie Tycoon‘s silly, undead world. These changes do sacrifice the tactical depth that hardcore RTS fans crave, but if you prefer a light strategy experience, there’s more than enough to enjoy.

Despite the noble attempt to streamline RTS gameplay for PlayStation controls, Frima’s results are far from flawless. Precision is still a major problem in several maps, slowing gameplay to a crawl while your units suffer . When you get swarmed by enemies (which happens often, this being a zombie game), choosing priority attacks becomes increasingly difficult when your finger motions keep shooting the cursor just past the intended target. Even worse are maps where highly precise unit movement is required to proceed. Occasionally you’ll need to navigate past tightly packed bear traps, deadly acid, and incoming missile attacks, which is frustratingly inconvenient when using button-press movements.
This actually brings up a larger criticism of Zombie Tycoon 2: That it sometimes forgets it’s an RTS. Those precise unit movements aren’t just tied to strategy gameplay, but to other genre elements unexpectedly thrown into the mix. For example, after an especially strategy-focused chapter halfway through the campaign, Zombie Tycoon 2 suddenly drops you into a one-on-one boss fight. With no preparation, your lone unit must drain a massive health bar while avoiding personal damage, all while using an RTS control scheme. Once you’ve finally surpassed that surprise obstacle, the next chapter opens with a forced stealth section, requiring you to sneak past insta-killing foes. While Zombie Tycoon 2‘s humorous tone remains consistent during these sections, the gameplay itself is jarring, and simply doesn’t mesh with what’s happened so far. If an option to move using the analog stick existed, that would at least make these levels easier, but instead you’ll reload multiple checkpoints thanks to threats the tutorial didn’t prepare you for.

Bottom Line: Zombie Tycoon 2 is an entertaining attempt to bring RTS gameplay to consoles, with a healthy dose of humor and zombies for good measure. Simplified controls and streamlined tactics greatly assist the experience, but imprecise movements and a lack of consistency keep the single-player campaign back from its full potential.

Recommendation: If you’re a PS3 or Vita owner looking for an introductory RTS, Zombie Tycoon 2 is a great strategy-light option. Just don’t expect it to have the depth or refinement of its PC cousins, and you’ll have a great time.