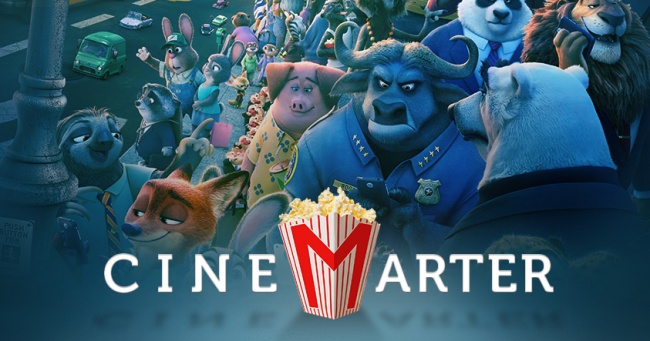 An early frontrunner for best animated film of 2016, Zootopia is the first of two films from the in-house animated studio at Disney this year. It’s going to be tough to beat; it’s unlikely that even Pixar will be able to top it, especially since Pixar’s offering is a Finding Nemo sequel that we really don’t need. It’s rare that a film manages to be a knockout combination of powerful themes, laugh-out-loud humor, gorgeous animation, an incredibly designed world, interesting characters, and great vocal acting as well as Zootopia does, but this film does it almost as well as one can.

The film takes place in an alternate universe in which humans never existed, so animals, all together, evolved to fit into every role that humans currently occupy. Throwing away their animalistic instincts, many of them now live in a seemingly idyllic city named Zootopia – stereotypical predators and prey no longer act the part. Our lead is Judy Hopps (voice of Ginnifer Goodwin), a rabbit who becomes a police officer, much to the dismay of pretty much everyone. There has never been a bunny cop, after all, as this is an occupation that has been dominated by large and tough (read: masculine) animals like bulls and rhinos. She’s given parking duty by the chief (Idris Elba) because she isn’t taken seriously. However, she manages to negotiate taking the case of a missing animal – although if she fails to solve it in 48 hours, she must resign from the force. 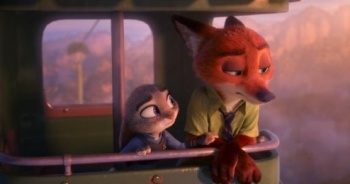 To solve the case, she teams up with a con artist fox, Nick Wilde (Jason Bateman), who was one of the last people to see the missing animal. What we’ve got here is a buddy cop film noir, but set in a world populated entirely by animals. What Judy and Nick find is not just a missing animal, but a much bigger conspiracy – one that reveals how Zootopia may not be the utopia it appears on the surface.

It’s with that conspiracy, as well as with scene-to-scene interactions, that Zootopia drives home its theme of prejudice – both of the racism and sexism variety – playing off and against individual characters’ discriminatory thoughts about the animals surrounding them. In an early scene, a fox bullies a rabbit. Later on, maybe the reverse is true. What the film does so effectively, and why it never comes off as preachy, is it makes these themes universal, and it presents them to us by showing us situations in which they occur, not by stopping the action and talking about the themes’ importance.

But getting outside that – even though it’s kind of amazing for a kid’s movie with a bunch of cute animals having an important message at its core – Zootopia is a ton of fun. Since it’s an animated buddy cop movie, you can expect a great deal of comedy – and you get that. Thankfully, the filmmakers have included more than enough jokes for the adults, too; this isn’t a movie that only the under-8s can enjoy – although they will. A person from any age bracket can go into Zootopia and have a blast.

Zootopia is a meaningful message movie about anthropomorphic animals made by Disney. Who saw that coming?

The story is a twisty and thrilling film noir whose reveals play directly off the expectations of its characters – and since they’re our points of reference, they’re more effective surprises for us, too. With that said, our protagonists are smart, and even the big twists don’t slow them down. Judy and Nick are intelligent animals, and the dialogue doesn’t dumb them down for the audience, which is wonderful. Their back-and-forth banter, too, is funny.

Zootopia is a wonderfully designed city with a whole host of sections we get to explore – and if there’s one thing that I left the theater thinking, it’s that I wanted more. We only get to spend a scene or two in some of these areas, and they’re rich enough that you could spend entire movies – yes, plural – in each individual one. If Disney was hoping to make a new franchise from which it could make several spin-offs, it got one. It’s incredibly well animated, its character designs are great, and it does such a good job at filling every frame with the perfect amount of visual information.

Ginnifer Goodwin and Jason Bateman anchor a tremendous vocal cast. They’re great in the lead roles, but they’re equally matched by much of the supporting cast. Idris Elba plays a buffalo police chief, J.K. Simmons is a lion mayor, Jenny Slate is the sheep deputy mayor, Shakira plays a pop star gazelle – whose song “Try Everything” is destined to be a hit. Octavia Spencer, Tommy Chong, Nate Torrence, Bonnie Hunt, Don Lake, Alan Tudyk, Maurice LaMarche, and Tom Lister, Jr. – among many others – round out such a rich cast of voice actors.

Zootopia is a meaningful message movie about anthropomorphic animals made by Disney. Who saw that coming? You can expect the “be yourself” message, which is also here, but a film using its animals allegorically to talk about racism and sexism? Well, it worked. Zootopia is a fantastic movie not just because of how effectively it delivers its important message – although that helps – but because of how it combines that with its great animation, fantastic voice work, intriguing film noir plot, and hysterical sense of humor. It’s a slam dunk on all fronts, pretty much a must-see, and an easy frontrunner for 2016’s best animated film.

Bottom Line: A fantastic movie from start to finish, Zootopia is the animated movie to beat in 2016.