Bless the Bartender, one of humanity’s greatest gifts unto itself. These selfless heroes go out into the night, and serve as the patron saint of local watering holes, filling the cups that ease our worries, mend our hearts, and help make life a little less crappy, even for just a short span. But what do these people who aid us, those who work tirelessly for tips that come long after stories that seem to have no end, what do they have to go home to, who’s there to hear them out when they’ve got problems? Well, if you’re Jill, from Va-11 Hall-A, it’s a constantly sleeping cat named Fore, and a whole lot of corporately sponsored beer. And for a few short weeks, we’re looking into the life of a bartender in a dystopian cyber-punk future, full of racist talking dogs, robot sex workers, synthetic pop stars, a heavy dose of internet culture and some good ol’ fashioned Old Fashioned, or I think they call it a Fringe Weaver now. 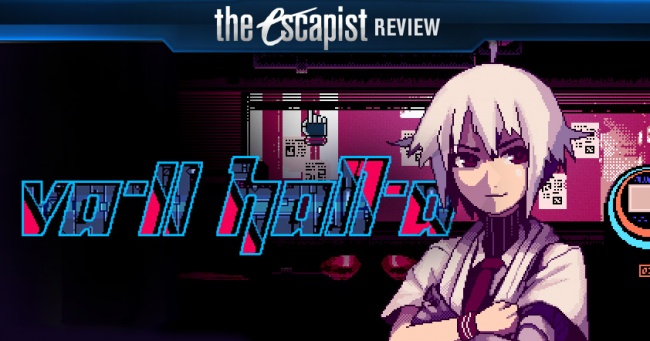 One of the great things about indie games is that the developers are able to tackle different types of gameplay, stuff you wouldn’t necessarily get to experience in a AAA title. Visual novels are starting to catch on over here in the West, and now after nearly two years of development time, Sukeban Games, along with Ysbryd Games have opened the doors to Va-11 Hall-A: Cyberpunk Bartending Action. The majority of the game revolves around serving drinks to the patrons of Va-11 Hall-A (affectionately nicknamed Valhalla), and just enjoying the story of Jill as she goes through a rather turbulent three weeks at the end of 2069. Although there has been a playable prologue available for quite a while now, it’s interesting to see that the developers took feedback of their prologue to heart, and have used it to make a game that is full of interesting characters, heartfelt storytelling, and plenty of different endings if you’re so inclined. By the end of my first playthrough I had managed to get the ‘Bad’ ending, and felt compelled to immediately hop into New Game Plus, which is a pretty rare occurrence for me these days.

Serving drinks comes up during the course of the myriad conversations Jill has with the patrons of Valhalla, and it’s done using a simple drag and click mechanic from the multiple mixers to a shaker, though I’d highly recommend using a keyboard to play this game as each of the mixers is assigned to the QWERT keys, making it a lot more efficient than clicking and dragging. Ingredients are listed on the helpful B.T.C. Recipe book, though if Jill is ‘distracted’ it’s quite possible to forget what you were supposed to make if you’re not paying attention. Completing a day on the job will reward you with cash needed to buy various items or maintain Jill’s status as a bartender, fail to pay her bills, or don’t indulge her in her wants to spruce up her room, and she’ll be less effective at her job, which can deprive you of bonuses, or can cause you to miss out on special events. There are a few branching paths that you can take that revolve around each of the clients that come through Valhalla, so it pays to be on the lookout for cues on what they like or would appreciate in their time of need.

It feels like a very human story, in the midst of a chaotic world that’s always moving, not much different than the times we live in now.

Speaking of clients, the team at Sukeban games did a pretty excellent job of creating a fairly unique cast of characters and a world for them to inhabit. Glitch City is your typical dystopian metropolis, run by corporations, and filled to the brim with people that have nanomachines injected into them, whether it be to assist them in work, or life, it’s a situation that no one asked to be born into and as a result you have a lot of interesting characters. People like Sei, a Valkyrie unit of the ‘glorified mall cops’ of Glitch City, or Stella Hoshii (Star, Star, cute), a ‘Cat Boomer’ whose body has been modified due to a genetic defect at birth that prevents her from being able to function with nanomachines in her body, but has left her with appendages that look like cat ears. You’ve also got assassins, reporters, musical stars, and brains in jars that get into discussions about pronouns. A number of colorful characters come through the doors of Valhalla, some are just there to unwind after a day at work, others heard about the bar via the game’s message board (replete with behavior that you’ll find on places like 4chan or Reddit), and some just happen to find the place out of dumb luck. The writing comes off a little trope-y from time to time when things try to get deep, but at the same time it seems like casual conversation you’d pick up at a bar, it’s not going to get incredibly poignant, but it does have moments that’ll give pause, but all you can do in the moment is serve more drinks.

The anime styled aesthetic feels like one part Snatcher, one part Blade Runner, and one part Phantasy Star. It’s very clear that this game wears its influences on its sleeve, with references to Hatsune Miku, Seinfeld, live streaming, and Robocop. Consider yourself having lived under a rock if you don’t catch at least one reference that you know. The visuals harken back to late 16-bit early 32-bit graphics, like something you’d see from the SNES or Sega CD, and it has the soundtrack to match. It’s very much in line with a lot of synth heavy tracks, full of upbeat tempos, along with a few mellow tracks that go along with the cyberpunk setting. You’ve got plenty of songs to experiment with, since each shift requires you to fill up the jukebox before you get to work, so given time, you’ll find the perfect tracks to go along with your gameplay experience.

Playing through the game once will take a good six hours or so, and then New Game Plus opens up, which allows you to carry over your money and items from a previous playthrough, making it that much easier to pay Jill’s bills. I managed to just miss the final bill, which was actually the most crucial, since it resulted in Jill getting evicted from her apartment, but the story wrapped up in such a way that it didn’t necessarily feel like a ‘bad’ ending. Overall the experience was rather touching. I don’t want to give away too much, but it feels like a very human story, in the midst of a chaotic world that’s always moving, not much different than the times we live in now, so it’s nice to play something with a little heart every now and again.

Va-11 Hall-A is very much a product of its environment, and by that I mean the internet. The teams at Sukeban and Ysbryd have reshaped a lot of the experiences we have on the internet today and used it to craft a compelling world full of life and characters that are unique and for the most part, well written. The drink making mechanic isn’t particularly deep, but the story draws you in and the gameplay takes the backseat to Jill’s story, which ultimately is pretty touching and worth your time.

Bottom Line: Va-11 Hall-A: Cyberpunk Bartending Action is precisely what is right about indie development right now. It’s a really highly polished experience with a lot of secrets to be found, coupled with a story that pulls you along with strong characters. The drinks just happen to be a neat distraction.

Recommendation: This one is for people who enjoy slow-burn visual novels, but still want to use a little bit of grey matter when necessary.