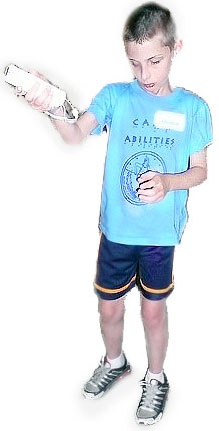 Just because you’re blind doesn’t mean you can’t get in on the Wii Fit craze.

Researchers from the State University of New York and the University of Nevada have developed a videogame-based workout system for the blind called VI Fit. While most exercise games like Wii Fit and EA Sports Active exclude blind gamers due to visual cues, VI Fit uses audio and a Wii Remote’s vibration to get them moving.

The “VI” in VI Fit stands for “visually impaired.” VI Fit‘s creators say that “children with visual impairments tend to exhibit lower performance in motor skills, lower levels of physical activity and fitness, and higher levels of obesity.” The game’s goal is to change that in a way that could be fun.

To play VI Fit, all gamers need is a Wii Remote and a PC that supports Bluetooth. Two mini-games, VI Tennis and VI Bowling, are currently available for free download. Audio and “vibrotactile cues” tell players when to serve and return the ball in VI Tennis, while the same cues actually indicate where players should aim in VI Bowling, and the results of the throw.

Tests with various subjects young and old indicated that the VI Fit games were able to “engage children into levels of active energy expenditure that were high enough to be considered healthy” and “yield levels of active energy expenditure that are comparable to walking.” The point is that thanks to the new wave of motion-controlled gaming, the visually impaired have a new way to workout and game at the same time just like those with vision. Bash the Wii all you want if that floats your boat, but its technology enables much more than the destruction of flat-screens and waggly Zelda play.

VI Fit can be downloaded here

Via: Games Radar via GoNintendo

Go To Zombie School, Get On AMC’s The Walking Dead