I wonder if I might be a cheater in StarCraft II.

Now, don’t get me wrong: Cheat codes don’t work in multiplayer, I don’t use third-party programs to hack (if there are any that work in the beta), and as far as the game is concerned, I never do anything that my Zerglings and Hydralisks aren’t designed to do. As far as traditional definitions of “cheating” go, then, I’m all in the clear.

I may not be cheating in the actual game, no. Cheating outside of the game, though? That’s another story.

It started a few weeks ago, when – as all great stories begin – I had been drinking, and decided the best thing to do was hop on Battle.net for a few rounds of SC2, because nothing works together better than beer and RTS games. I quickly found a game via the matchmaker, it loaded, and my opponent and I greeted each other. “Haha,” I then said, in a statement likely riddled with typos, “Sorry I might suck right now, I’m pretty drunk.”

Of course, I wasn’t that drunk. I was precisely inebriated enough to think I was more intoxicated than I actually was, but not drunk enough to forget my fundamental principles of playing the Zerg. Not ten minutes later, the match was over with my Roaches roaring through the enemy base – my opponent had been too busy going for the high-tech units to build more than a token defense, and hadn’t harassed me once.

Wow, I thought to myself, I guess my opponent was just a lot worse than I was. So I queued up for another game, gave my new opponent the same “Sorry, I might suck right now” message – and it was another overwhelming win. And then I won yet another, and another still. Surely, this couldn’t be just a coincidence, I reasoned (now sober enough to reason). Were my opponents simply taken off-guard because they thought they were facing a foe whose edge had been blunted by the drink?

Was it really possible that what I’d been saying to them had helped decide the match before our forces ever once saw each other on the field of battle?

I resolved to test this theory. In further matchups, I said things to try and put the enemy at ease. When one of my foes gave the standard pre-match salute, “gl hf” (good luck, have fun), I asked “What’s that mean?” – a newbie question if there ever was one. Another opponent sent one of his workers into my base to scout at the beginning of a match (a very standard tactic), I cried “hey, wtf, why’d you do that!” Having a single beer became cause to say “Sorry, been drinking, might not be up to snuff right now,” because it was technically true, after all. 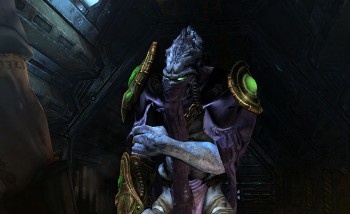 While I didn’t win all of those battles, I won more of them than I lost. There’s no concrete evidence to suggest that the crucial element was my opponents underestimating me, of course, but it did seem to build up a very definite pattern.

On some level, StarCraft – and games like it – are all about deception, since it’s a legitimate part of any strategy. I might build up a few Roaches and throw them in a suicide attack at my Terran-playing foe, leading him to build Marauders: powerful ground units that destroy armored units like my Roaches, but which have no defense against aerial attacks, which will be the main thrust of my attack. Or, a clever opponent of mine will build his main production facilities away from his main base, causing me to believe that he has the most minor of defenses and attacking before I’m ready, only to be slaughtered by a hidden force lying in wait. All of this is part of the actual game.

But is trying to win by misrepresenting who you are part of the game, too? If I were to name my Battle.net account something stereotypically “girly,” would others not take me seriously because “lol girls don’t play StarCraft“? If I chose the nick BoxeR (after the famous pro StarCraft player), would others think I was a fan of professional-level RTS and take me more seriously than they might have otherwise?

There’s no question that the sort of thing I’d been doing was trying to tilt the field in my favor on a metagame perspective, but that doesn’t mean it’s cheating, per se. Competitive matchups can be won by psyching the other guy out, no matter what game (or sport) you’re playing. When you think about it, it’s not all that different from football linemen talking smack at each other before the ball is snapped – any edge is still an edge, as long as you’re still playing the game the way it’s meant to be played. If you can get the hare to believe you’re a tortoise, he’s got no one to blame but himself if he stops midway through to take a nap.

And yet, as much as it’s logically sound to think of it that way, it still feels like I’m doing things wrong. It may simply be unavoidable: In a game based so heavily about trying to outthink and predict your opponent (to The Princess Bride-scale deductions), anything you say or do can and will be used against you. Why not turn that to your advantage?

If I’d titled this week’s installment of View “Sorry, I’m Too Drunk to Write a Good Column,” I bet I’d be coming off as really, really smart about now. Ah, hindsight.