In case you missed the news, the WoW: Cataclysm beta test is now under way, which means that I now begin the long and arduous task of waiting for the client to download, install, and patch itself up before I can actually get in and start playing the game. Naturally, that means that I get to spend a bit more time just thinking about how this expansion resonates with me. Hooray!

I’ve spoken with more than a few people who don’t play WoW – or who don’t play MMOGs in general – and can’t understand why this expansion is such a big deal to us denizens of Azeroth. It’s just another expansion, right? So what if Blizzard is going back and changing some things, doesn’t that always happen? The designers make some changes, they add more levels and dungeons and new zones – to some of these people, Cataclysm just seems like the same old thing all over again.

To the people who play WoW, of course, nothing could be further from the truth. Now, it’s true that MMOG expansions have always changed things in their respective games, but I can’t think of any game that did something quite like this – the utter destruction and rebirth of its world. Star Wars Galaxies changed its entire gameplay with the NGE (which was a cataclysm of sorts, yes), but the universe remained the same. EVE Online has made more than a few graphics-and-engine updates, but everything else is the same old EVE, where change is an expected element but the core principles of the universe remain the same.

Cataclysm is the opposite. The gameplay will be getting the same tweaks that always come with expansions, but will mostly remain the same – it’s everything else that’s changing. And that’s the weird part.

But what if one day, all of that changed?

With LotRO, Turbine is following the Lord of the Rings story as closely as possible, but what if they decided to change that. One day, you log into the game to find out that Sauron has won. He’s captured Frodo and taken the One Ring, and now the armies of Mordor are marching their way across Middle-earth. Players must now fight Sauron to desperately protect their homelands as his orcs torch everything in their path.

It’d be a cool twist and make for a very dynamic gaming experience, but the Tolkien fanatics wouldn’t be the only ones up in arms. The people who play LotRO are every bit as attached to the world Turbine has built out of the beloved books as the people who play WoW are attached to Azeroth. They both have places where they like to just hang out or idle away the time – and now you’re telling them it’s changing? We’ve spent the last few years growing accustomed to a certain mindset that suddenly no longer applies. It’s like if Star Trek Online players all logged in to find themselves in the Mirror Universe. 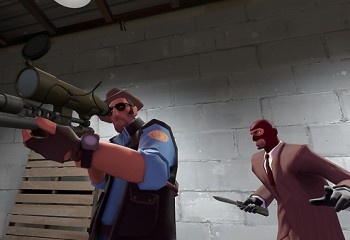 “All right,” you might be saying right now, “But that’s just MMOGs. I don’t play those games.” While it probably is a more powerful concept when applied to the worlds of massively multiplayer games thanks to the persistent worlds – and thanks to the fact that for many, MMOGs are far closer to lifestyles than mere hobbies – I don’t think that it is just these games.

Imagine if Valve suddenly decided that it would be giving a huge destructive overhaul to the Team Fortress 2 maps that people have been growing fond of since 2007. The sniper balconies in 2fort? Gone. The chokepoints and nooks for sentry guns in Badwater Basin? Yanked ’em right out. All those spots that you use as a Spy to hide out of sight as your cloak recharges? They’re not there anymore.

Now, imagine if you couldn’t just go to another server running the classic maps – they were gone for good. Wouldn’t you feel strange, having these familiar places and objects that you were used to suddenly change or even disappear completely? It doesn’t even have to be a multiplayer game: Say that Rockstar developed new GTA4 DLC that took place in a post-apocalyptic version of the Liberty City that had been so well-realized in the original game. Niko Bellic’s favorite hangouts are now rubble. The streets you careened down in the middle of an auto chase are now cracked and littered with the husks of burnt-out cars.

There’s no question that for many gamers, there would be a significant sense of loss and regret, no matter how cool the new DLC was. It’s the same reason that Fallout 3‘s Capital Wasteland is so memorable and evocative – it’s similar enough to be recognizable, but any familiarity is overshadowed by the fact that what was once familiar is now gone. The feeling of “this thing that I loved is now different and I can’t ever go back” is a powerful emotion, whether it’s being portrayed in a videogame or a film – and whether the world being destroyed is real or fictional.

These are worlds in which we spend hours. Would you make fun of someone who complained that their favorite bar was being torn down or their favorite little restaurant was now an IHOP? Of course not, because these are tangible real-world places imbued with a sense of identity. But we spend just as much time in these fictional locales as we ever do in any one place at real life.

The sense of identity is real, even if the place is not, and it’s going away. It may be for the better, but that doesn’t mean we can’t miss what’ll be gone.

John Funk can’t decide if he wants to check out the new max-level content or reroll to see how everything else changed.