This year’s Final Fantasy XIII was, to put it mildly, a divisive title within the Final Fantasy fanbase. While fans pointed to the game’s narrative, richly designed world, excellent art direction and great battle system as pluses, others criticized it for its extremely linear nature, its excruciatingly slow start, and the fact that its battle system doesn’t actually get good until you unlock everything twenty-five hours into the game – long after many people gave up on it. When all was said and done, I finished FF13 looking upon it fondly, but the criticisms against it are certainly valid.

There is one particular design choice in Final Fantasy XIII, though, that is absolutely brilliant. Unlike previous Final Fantasy games, where you could only restore your health and magic via the use of items and abilities (or at save points), FF13 completely healed the party after every single encounter. Like most things in the game, it was controversial – “This dumbs the game down,” cried the faithful, “It makes it too easy!”

No, it didn’t. In fact, it did just the opposite, and it’s something that every designer should start to consider.

In previous Final Fantasy games – and other games like them – the developers had no way of knowing for sure what any given player’s status was. Maybe they had more than enough restorative items, maybe they didn’t have any, maybe they were over-leveled in some areas and weak but others. You know that you want there to be spikes of difficulty with the bosses, but what about the stuff in between? How hard do you make it, if you actually want people to progress through your game? If you want them to stand a chance at the hard parts, you can’t make the in-between too challenging – so it ends up feeling bland as you mindlessly chop your way through enemies that don’t stand a chance.

Final Fantasy XIII didn’t have that problem. The designers knew that for every single fight in the game, whether boss enemy or “trash,” you would be entering it completely fresh. Since they didn’t have to worry about keeping you ready for the big climactic battles, they could make the in-between fights actually challenging – and they certainly were.

Halfway through the game, I found myself dying to regular enemies far more frequently than I ever had in any other Final Fantasy game I’d ever played. It was challenging, it was engaging, and it was fun. No longer was I just running through the world mashing Attack with the characters of Tidus or Cloud, trusting that I’d slay the monsters in one or two hits; I now had to pay attention or I’d get smashed. 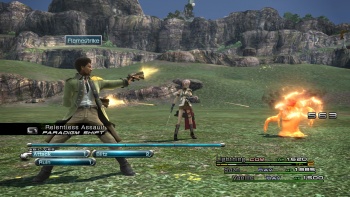 Interestingly enough, this is also a concept that Blizzard seems to be moving towards with World of Warcraft. Back in ye olde days of WoW, many of the most powerful abilities were on very long cooldown timers – Shamans’ ability to self-resurrect, Druids’ power to revive someone in battle, or the Warriors’ ability to suddenly take much less damage for a certain amount of time were all on timers of thirty minutes or greater.

With that long a cooldown, how do you tune boss battles? If you balance them around the use of these abilities, then players either have to sit around waiting for the timer to be up to have a shot, or try anyway, knowing that it’s all but futile. But if you balance them around the standard baseline capabilities of your characters, then players who can actually use the long cooldown abilities just blow through your content far easier than expected.

That was, in fact, what happened. My WoW raid group would participate in “real” attempts where we had all our abilities at the ready, and then in-between just throw ourselves at the bosses in “practice runs” in which we knew that we stood little chance of success. Killing the boss was fun, but the hopeless attempts were much less nifty.

As a result, the developers lowered the cooldown of these abilities to a matter of minutes, but also reduced its effectiveness – this way, they could balance fights with the knowledge that players would have their extra powers available every time, and not have to worry about swinging too far in either direction based on player agency alone.

Everyone likes to feel powerful, but if the tradeoff for a minute of power is thirty minutes of feeling weak, will players use their powers? If not, then, on some level, you’ve failed as a game designer. Game designers need to think about how they give their players resources – whether it be skills, items, abilities, or anything like that – before they start balancing their games, or else you wind up with legions of boring, non-challenging enemies that fill gaps between suspicious generosity and moments of actual challenge and excitement. You know, the things that we’re playing the game for.

This isn’t to say that all games necessarily need to do this. Being low on resources can create excellent atmospheres of fear and tension – if you always have all the ammo to shoot all the zombies, your survival horror game won’t be very scary. So if that’s what you’re trying to do, then by all means go ahead and be scarce.

But on the other hand, if always assuming that your players are at 100 percent capacity for every fight means that you can deliver a more challenging and engaging experience, why wouldn’t you do that? You aren’t dumbing it down; you’re attempting to make your game fun throughout the whole experience.

John Funk actually skipped as many of the monsters in the final dungeon in Final Fantasy XIII as he could because they were kicking his ass.