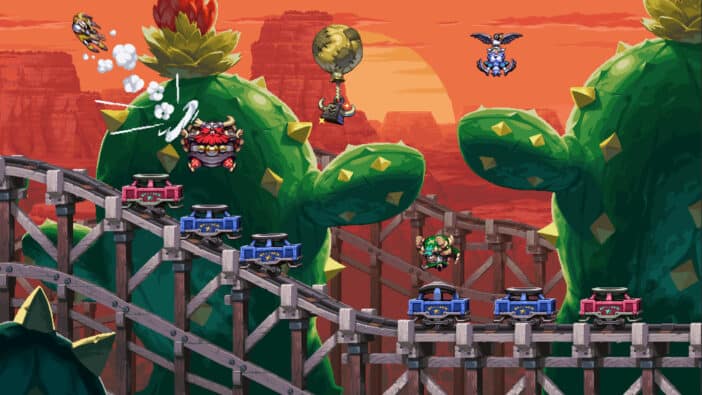 Owlboy developer D-Pad Studio has announced Vikings on Trampolines, a 1-4-player co-op sidescrolling adventure with pixel art of frankly astounding quality. The game is exactly what it sounds like — horned warriors bouncing on trampolines to go on an action-packed journey, and it’s coming to PC and consoles. Per IGN, there is a story mode about rescuing King VI and defeating the wicked Balloonie, with plenty of boss fights along the way. The game will also have competitive Versus modes, which seems inevitable when you’ve built a game with a mechanic like this.

“Vikings on Trampolines began life as one of our small experimental projects, which won the first Nordic Games Indie Sensation Award back in 2011,” said Jo-Remi Madsen, creator of the game at D-Pad Studio. “After releasing Owlboy, we’ve since returned to the idea and developed it into a fun, fully-fledged, co-op adventure!” Check out the Vikings on Trampolines announcement trailer and try to remember what pixel art started out as on NES.

This is everything we know about the game for now, but it’s enough to munch on. D-Pad Studio became known for extraordinary pixel art with the 2016 release of story-driven single-player adventure game Owlboy, and it doesn’t look like the developer is letting up with Vikings.