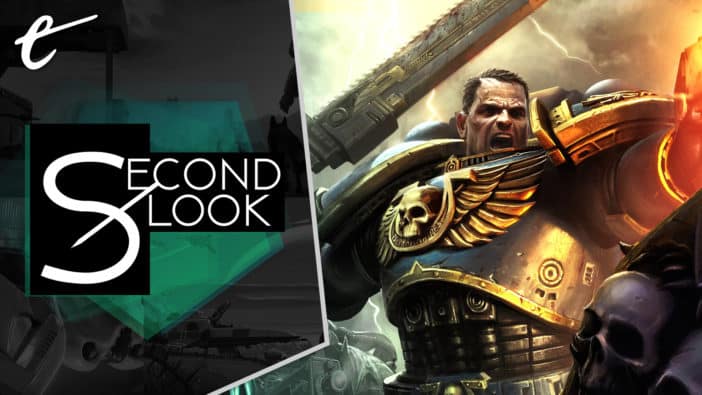 “Space marines!!!” That single line that you hear hundreds, if not thousands, of times shouted at you throughout a playthrough of Warhammer 40,000: Space Marine summarized the delightful simplicity of what’s in store. Warhammer 40,000: Space Marine is interested in neither ego nor explaining itself to you. All it wants to do is stomp on an Ork, stab it with a chainsword, and jetpack around while wielding the arsenal of a walking tank. That’s it. That’s the whole game. And I wouldn’t have it any other way.

The entire premise is that simple: A planet is falling to the Orks, so stop them by any means necessary. Protagonist Captain Titus is little more than a whirlwind of brawling and shooting you pilot, conveying all the personality of a glass of water. Refreshingly to the point, but not exactly someone who’s going to season the boilerplate story that borrows heavily from Halo: Combat Evolved.

The great news is that none of that matters. You don’t need to know what an Inquisitor, Titan, Forge World, or Tech Priest is to get into Warhammer 40,000: Space Marine — it’s banking on you not caring. There’s some fan service for those into the Warhammer setting, but Space Marine is all about living a day in the life of its titular Ultra Marines.

And what a fine day it is.

Space Marine quite literally drops you into the fray and never slows down from there. What constitutes an LMG to a normal soldier is a pistol in your hands. Your combat knife is larger than your head. Later on, you’ll acquire Heavy Bolters, a disintegration Lascannon, a remote charge Vengeance Launcher, plasma weapons, and a Melta shotgun. There are even three different primary melee weapons to choose from, including the chainsword, a battle axe, and a hammer so heavy it locks out your ability to wield your bigger guns. With this arsenal, you will lay waste to the Ork and Chaos hordes for the glory of the Emperor. 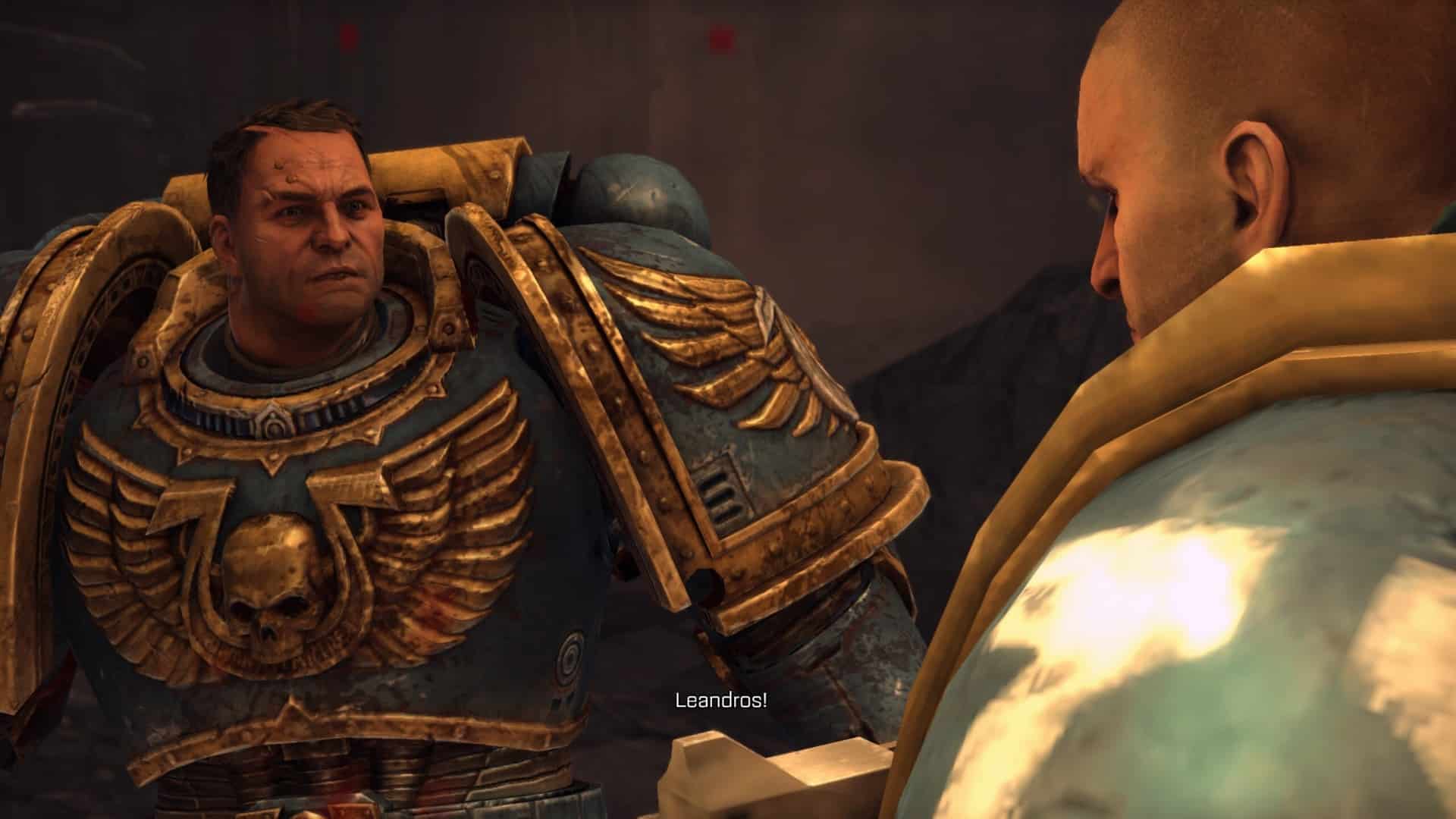 One doesn’t typically describe a combat system as beautiful, but I struggle to find a more fitting term to describe Warhammer 40,000: Space Marine’s Ork-stomping, Chaos Daemon-disemboweling, unrelentingly satisfying hybrid combat system. At a time when brawlers and shooters were only just starting to mesh together, Relic Entertainment’s first and only action game is an astonishing testament to Relic’s versatility. Their preceding Dawn of War games were drenched in the Warhammer 40,000 setting, but they were dense RTS games that could take dozens of hours just to get to grips with. By merging that appreciative eye with an accessible combat system, Space Marine is an easy jumping on point to figure out if you dig Warhammer’s brand of over-the-top carnage.

In the campaign, takedowns are the only way to regain health outside of your rage meter, with a flimsy shield that recharges slowly as your only other alternative. By making takedowns necessary, players have to get to know the melee combat. Ranged is totally valid, but you can only carry so many rounds, which demands changing up tactics. It’s a remarkably simple but deep combat design. Levels and enemy combinations equally challenge your preconceived ideas of what weapons and gear are best.

For instance, sure, your heavier ranged guns are powerful, but your hammer can stun the heaviest enemies in the game with one smack. By contrast, there are times where mixing things up does wonders, as the free-flow controls let you dynamically go from shooting to brawling with a single press of the attack or dodge you want to deliver.

All of this is sold with some of the absolute best sound design you’ll ever hear, paired with brilliant combat animations. Just sprinting feels powerful, making every charge into enemies crunch through your speakers like a battlecry. Even the camera, something modern hybrid combat games struggle with, functions nearly perfectly. Space Marine shouldn’t work this well — for a game from its period in 2011, its list of achievements is staggering, and we’re not close to done yet. 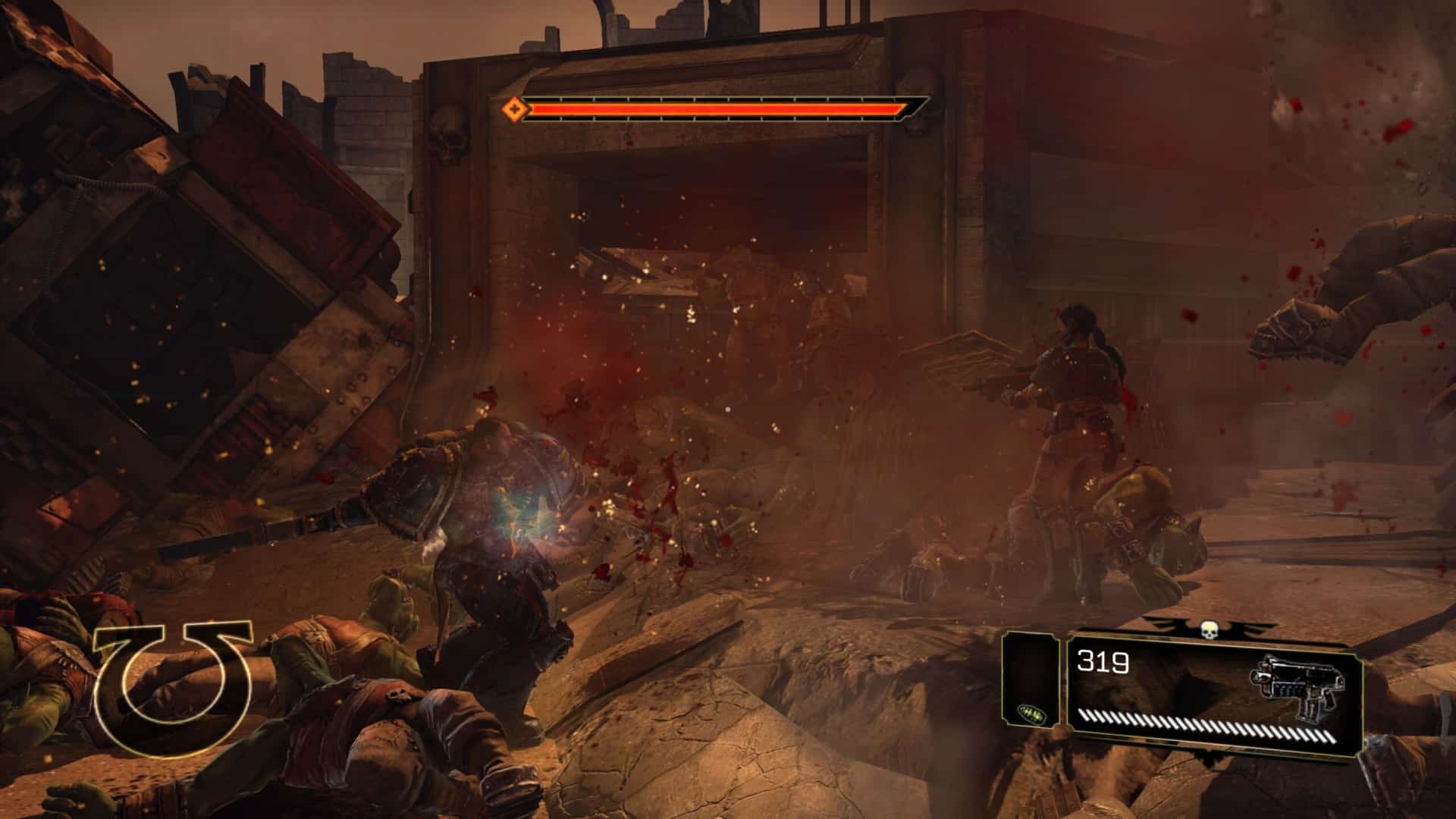 After you’ve finished your mission with Titus, there’s more, a lot more. Multiplayer was given equal priority to the campaign, letting you customize your Ultra and Chaos Marines however you please. Though the PvP modes are relatively limited to Discord meetups these days, the co-op mode in Space Marine manages to outdo more recent 40,000 action games in capturing the essence of the Space Hulk tactical board game. Teaming up with three other players, you assume one of three specialized classes shared with the competitive modes, and all unlocks are unified, another rarity of its day.

Your team has to survive four gauntlets of increasingly deadly opponents, with a final bonus wave of Chaos Marines if you manage to make it that far. It’s unrelenting, pushing the breadth of opponents, environments, and tactical options to the fullest. There’s some additional gear like heavier guns and grenade types exclusive to multiplayer to spice things up further. Though some areas are reused from the main campaign, there are unique layouts that offer a far more open-ended sandbox of combat to engage in. It’s brilliant in action, and I highly recommend it if you can gather a full team of friends. The mode was popular enough to warrant a special Chaos DLC co-op campaign for those interested in playing as the baddies.