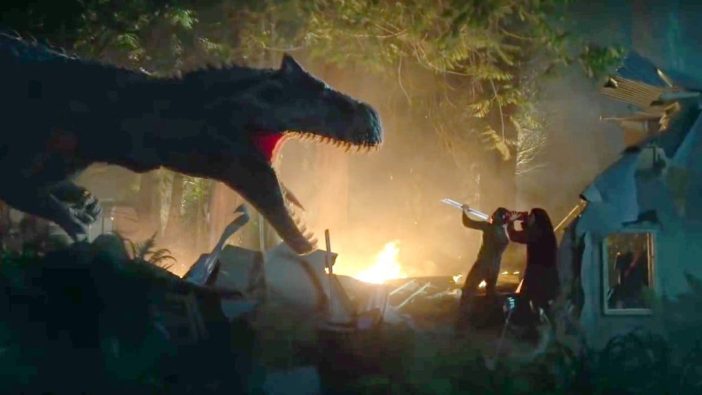 Jurassic World 3 might still be a few years away, but that doesn’t mean you can’t get a dose of genetically reborn dino action right now as Colin Trevorrow’s short film Battle at Big Rock has dropped online after its premiere yesterday.

The short was co-written and directed by Trevorrow, who is returning to helm Jurassic World 3. It’s a pretty simple premise that ties together nicely as a family is out camping at Big Rock but is rudely interrupted by dinosaurs foraging in their camp. Those dinos are in turn interrupted by a bigger, sharper-toothed dinosaur, and that’s when problems start to happen.

It’s a pretty tightly constructed short and shows off Trevorrow’s skill at capturing iconic moments with some impressive shots (see header image). The story takes place about a year after the last film, and as the new snippets at the beginning of the short say, dinosaurs are now roaming the land freely and even breeding. How that managed to happen is a bit up in the air, but clearly the series is steering towards an actual world full of dinosaurs and extrapolating that out.

The main moral of Battle at Big Rock is obviously to never ever have children because they will get you killed. Aside from that, however, it gives us some insight into where the franchise is going. It will be interesting to see where and how the third movie takes this and how far into the dinosaur “apocalypse” we’ll be. Chris Pratt as a Mad Max-style hero roaming a world overcome by evolved, man-eating dinosaurs? Yes and please.