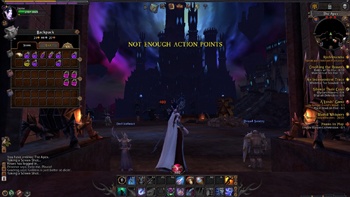 Allen and I have been gaming together as long as we’ve been friends, which amounts to about a half-decade now. We’ve logged dozens of hours in tactical shooters and co-op action games. We’ve followed each others’ progress through epic single-player RPGs like Elder Scrolls: Oblivion. We’ve lost entire evenings to Guitar Hero and Rock Band.

But Allen won’t play MMO games. Not for anything. Never has, and maybe never will.

“I have enough bad habits,” he explained when I tried to get him on board with WoW , and later, Age of Conan. “I don’t need to get hooked on that kind of crack.” This from the guy whose nightly Forza Motorport 2 compulsion brought his personal life to a grinding halt for nearly two months straight. The same guy who finished Bioshock in a 3-day weekend, and who played Final Fantasy XII to completion – twice.

In recent conversations with Allen I’ve rambled on about my current vice, the recently-released MMOG Warhammer Online: Age of Reckoning. He’s listened politely, not quite feigning interest, as I’ve encouraged him to give it a closer look. Last week, he surprised me by telling me he’d done exactly that.

“I watched some videos of that game you keep bugging me about,” he said, explaining that he’d spent part of an evening reviewing online gameplay videos of WAR’s character creator and a few combat scenarios.

He frowned. “I dunno, man. It just looks…kinda off.”

“Well, there were all these guys fighting and they weren’t connecting. Like they were running through each other. And they just looked really fake, like their animations looked really simple and clunky. And the graphics…they just weren’t very good.”

“That’s not the kind of response I was hoping for,” I replied.

“And there’s all this crap all over the screen,” Allen continued. “All this stuff. Words and buttons, all over the place. It looked complicated.” He shrugged apologetically. “It just didn’t look good.”

“Look,” I said. “MMOs are a different sort of animal. That stuff sort of comes with the territory and you learn to overlook it. It’s part of the deal with that kind of game.”

“I can’t overlook it,” countered Allen, “And that’s why I don’t play those kinds of games.”

And so despite my explanations and protests in response, Allen will not be playing WAR, or any MMOG for that matter, in the near future.

To each his own, of course. But I couldn’t help but leave the conversation thinking that Allen really doesn’t know what he’s missing. It’s hard to overstate how the constant presence of thousands of fellow players lends purpose and meaning to the huge, persistent worlds MMOGs provide. They may scratch some of the same itches that other games do, but there are some truly incredible experiences you simply can’t get outside a good MMOG.

Such were my thoughts as I logged into WAR later that evening. But as my Bright Wizard appeared on screen, ready to conquer the realm in his hard-earned and custom-dyed gear, I couldn’t help but see the game through Allen’s eyes. 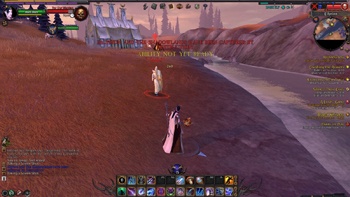 WAR isn’t consistently jaw-dropping or anything, but it still holds its own by virtue of plenty of nice graphical touches and cool, creative artwork. It looks good by MMOG standards.

But, I had to admit as I pondered Allen’s comments, only by MMOG standards.

And that’s the catch. To Allen, who spends most of his gaming hours with titles like Half-Life 2, Rainbow Six: Vegas, and Soulcalibur 4, modern MMOGs seem obsolete. Graphically, they usually don’t measure up. They’re completely lacking in features standard in other games for years now, like robust physics simulations, sophisticated lighting effects, and collision detection. Their character AI is often woefully primitive. In short, MMOGs can often get away with levels of technical sophistication and presentation that would ruin games of other genres.

That’s not the only thing off-putting to those unfamiliar with the genre. Look at an MMOG screenshot and you’ll see a 3D landscape completely smothered by buttons, meters, minimaps, progress bars, portraits, chat windows, character names, and other tidbits of information. And that’s just what’s onscreen. When you consider the numerous map, social, quest, and other essential windows that players are forever popping open and closed to get things done, it’s a wonder how any fantasy world can shine through all this junk.

There are reasons for these perceived shortcomings, of course. Many are technical. The average console action game doesn’t need to track and record the actions of thousands upon thousands of players and characters, for example. Others are practical. If you’re building a PC game for the largest player base possible, you need a game engine that will run on cheap, off-the-shelf PCs. And then there’s the stubborn, if-it’s-not-broke-don’t-fix-it tradition of game creation. If WoW’s refinements to familiar MMOG design drew in more than 10 million subscribers, why not stick with it? Why reinvent the wheel the next time around when you can simply refine it?

I can’t really argue with Allen’s assessment, but I’m still enjoying my travels around the Warhammer universe. I don’t think that will change anytime soon. And when the next well-built MMOG comes around, I’ll probably get my money’s worth out of it even if sticks to its genre conventions and falls comparatively short in the areas I’ve mentioned. But I will keep hoping for something a little better.

Imagine an MMOG with the graphical prowess of Fallout 3, the AI sophistication of Half-Life 2, and the physics engine of a game like Crysis. And imagine seeing it through an unobtrusive, streamlined interface that didn’t compete with its imaginative setting. Is such a game possible? I don’t know, but I like to think so. I’m certain I’d enjoy it. And I’m willing to be my friend Allen would, too.

Adam LaMosca is currently grinding a day job instance in the Portland, Oregon realm, where he’s leveling up his research and writing skills.