We Happy Few takes place in an alternate-universe depiction of 1960’s England, where the townsfolk have invented a happiness-inducing drug called Joy, which simultaneously sedates and inspires euphoria. The happy addicts populate certain areas, but despite the happy pills that they’re all taking, the folks are incredibly hostile – and violent – towards “Downers” – those who refuse to take the drug.

The first-person survival game pits the protagonist against internal and external forces, with the player focusing on ensuring their character’s wellbeing. Multiple factors play a part in your character’s survivability. Food and water icons remind you that human beings need to eat food and stay hydrated in order to not die, and a sleep icon reminds you that, even in video games, you are much better off after some rest. In addition to keeping their character breathing by managing their basic needs, the player must also constantly assess their environment. 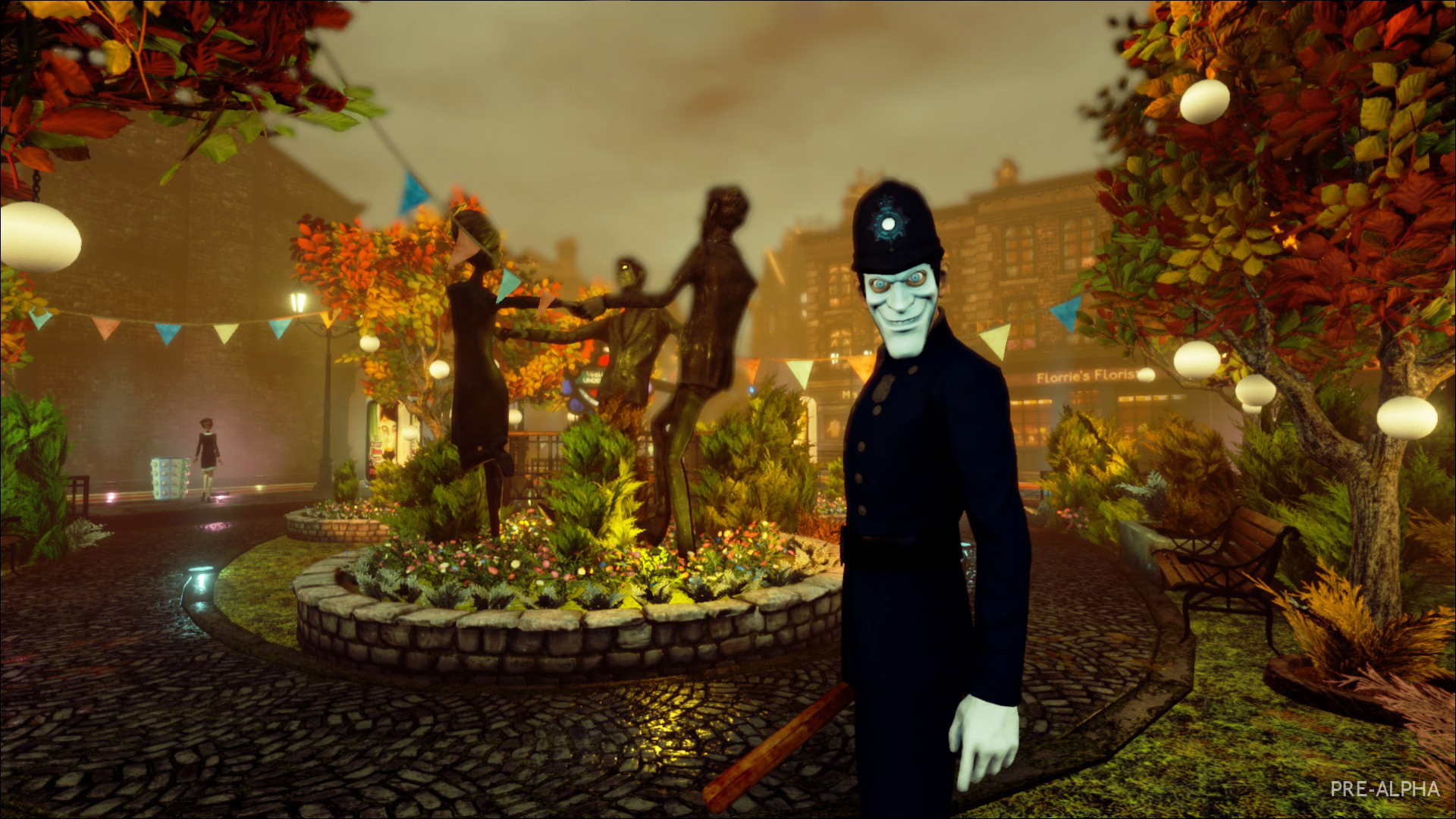 If you venture into the “wrong” neighborhood you will be swiftly attacked for looking or acting differently. Throughout the game you are met by characters who are immediately suspicious of anyone who doesn’t look like them. You can’t run – that’s suspicious and, in most cases, will end up with you being beaten to death with whatever those weird smiling Stepfordians can find. You can greet them, but this must be done quickly as the response to outsiders is swift – and in more densely populated areas, greeting everyone before they decide to kill you isn’t possible. This is where the second aspect of survival comes into play – blending in.

Blending in in different neighborhoods can be accomplished in a number of ways. In the more drug-riddled areas, for example, you can successfully conform by dressing like other townsfolk. However, taking Joy is also an easy way to avoid arousing suspicion, or to calm folks who have already become suspicious. Taking Joy brightens the world, with everything from the people to the pavement becoming warmer, more vivid. Taking Joy, however, is a risk versus reward decision. Short term, the drug allows you to navigate to areas, or avoid imminent violent confrontations, as you now blend in. Long-term, however, the drug impacts your health. And remember, this is a roguelike – you really don’t want to have to start over.

Combat is, predictably, a large part of the game – not surprising, considering the number of people who are trying to kill you at any given moment. When blending in doesn’t work, it becomes kill or be killed. Weapons are hidden throughout the world to help with this – just make sure you clean up after yourself when you’re done. In addition to staying alive and killing people, there are also a number of supplies that you can gather – meaning you’ll be spending a lot of time digging around in garbage cans and piles of trash on the ground along with bookcases, lockers, and drawers. Other valuable items come from the ground – as in, they grow. Certain flowers can be harvested to make healing aids, others can be crafted into a bouquet (which can help you win over certain NPCs), and there are berries for food. Nearly everything is useful, but the challenge is in discovering the use.

The most special thing about We Happy Few isn’t the combat or the flower harvesting though. It is the aesthetics. The game is legitimately creepy, immediately bringing to mind the “Love That Joker” commercials from Batman – in a good way. In fact, We Happy Few may be the most successfully terrifying horror game I’ve played in years – and it isn’t even a horror game, in both premise and appearance. Without invoking the stereotypical horror icons – zombies, monsters, zombie monsters – it managers to cause a different type of fear – the fear of an actual, believable threat. The fear that human beings are inherently drawn to cliques, and the fear of being forced to conform in order to survive. While We Happy Few is certainly an extreme take on that, it’s also a quite relatable one. We all want to belong – but at what cost?