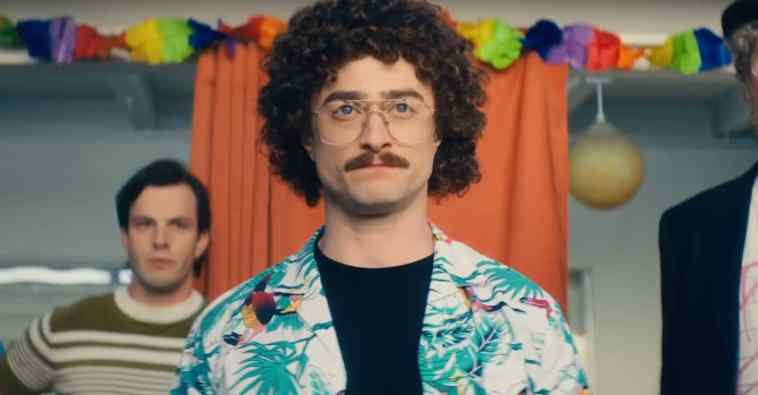 There is no one quite like Weird Al Yankovic. Over the last three decades the musician has basically been the go-to resource for song parody, and in a time before YouTube, he was really one of the few options out there at all. But who is the man behind the Hawaiian shirts, big hair, and oh-so-sexy mustache? Weird: The Al Yankovic Story is here to maybe answer that question, or it might just be here to be funny and let us all know what Danielle Radcliffe would look like with a big head of curly hair. The first teaser trailer for Weird: The Al Yankovic Story doesn’t really let us know.

Just what the film will be about, aside from being humorous and quirky, isn’t entirely clear. It’s not like Yankovic’s career has been replete with drama aside from a brief beef with Coolio, that, in the long run, Weird Al decidedly won out on. Yankovic penned the script alongside the film’s director, Eric Appel, so even if there were some sort of dramatic dirt to dig up about a man who is pretty much universally loved, this probably won’t be the movie to do it. But the movie will document his early rise to stardom, as well as his “torrid celebrity love affairs and famously depraved lifestyle,” which suggests a slightly satirical take on the entire musical biofilm that plays with the same kind of humor that UHF did back in the day.

In the Weird: The Al Yankovic Story trailer, we hear Weird Al’s parody of “Like a Virgin,” “Like a Surgeon.” Madonna will evidently play a part in the film and will be played by Evan Rachel Wood. Also in the film are Julianne Nicholson, Rainn Wilson, and Toby Huss. Clearly, though, the star of the film will by Daniel Radcliffe as Weird Al as he once again shows that he’s far more than just Harry Potter and can tackle roles far and wide, no matter how demanding the mustache work is.

Sadly, this delightful-looking film is coming exclusively to the Roku Channel, a free streaming service that can only be described by the question, “Wait, that’s a streaming service?” It will debut there sometime this fall.