Science is amazing! It has extended our lifespans, helped us land on the moon, and runs the very device you’re reading these words on (even if some smartphones look like they’re powered by black magic these days). And we still don’t have it all figured out: As our last Science Guessing Game gallery showed, there are all kinds of wonderful things happening at the periphery of our understanding. Some are wonderful, some are a little scary, and some are adorable. But most of the time, all it does is make us curious about what other strange things could be out there. And we’ve got a few more for you.

The rules are the same as last time. Each page will present an image pulled from the weirder parts of astronomy, biology, or some other scientific field without any context. After taking a few minutes to mull over what it might be, you can click ahead for a more detailed description. If you get one or two, that’s great. But if you can get them all, you’re probably some kind of scientific savant. Or you spend too much time on the internet. It could go either way. 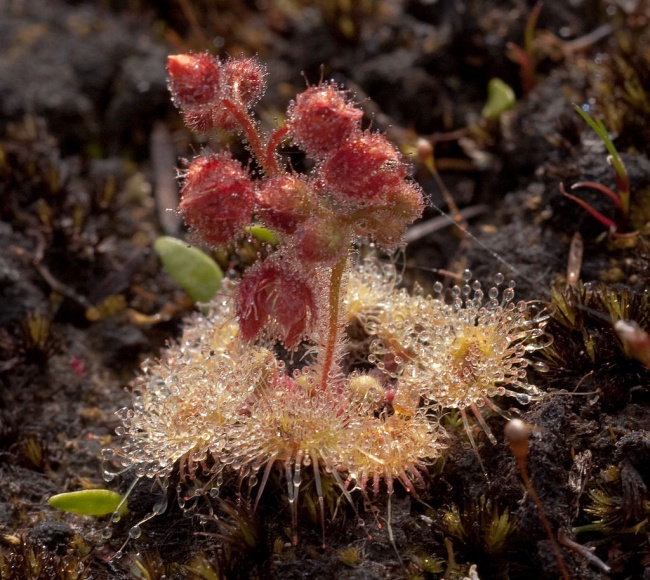 At first glance, you might have thought this was a plant that had water or ice crystals clinging to it somehow. But nope. Those are tentacles. Tiny, tiny, tentacles.

This is Drosera glanduligera, otherwise known as the pimpernel sundew. It’s a lovely little plant growing in Australia that also happens to be carnivorous. But because Venus Fly Traps are so pedestrian, D. glanduligera mixes it up with a fly-catching method combining features of flypaper and snap traps.

Basically, this plant has two types of tentacles: catapult and glue. Catapults sit on the outer edge, with a sensitive spring-load that snaps as soon as something small, like a fly, lands on them. That flings them into the center of the plant, where the glue tentacles slowly unfurl and drag the helpless insect to its doom. It’s an incredibly efficient system from which flies rarely escape… which you know some scientist proved by putting a bunch of flies into a room with one while ignoring their panicked cries.

It seems this system evolved for D. glanduligera to feed itself quickly, which is important since it only lives for about a year. Given its fast growth speed, I’m strangely comfortable with that timeframe. 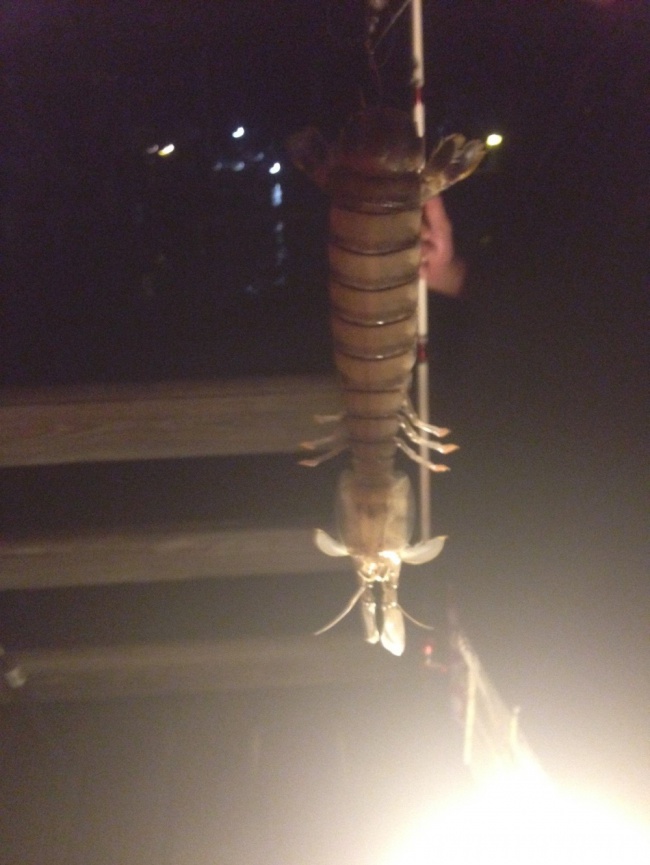 There are some things you don’t expect to pull up on a fishing trip, and this is certainly one of them: a large “alien-like” lobster that had its picture taken and flopped around on the boat before being thrown back out to sea.

Since the Florida fisherman in question presumably wasn’t a scientist, he likely didn’t have the information at hand to determine what it was. But he posted the pictures online and eventually learned that this was probably a kind of mantis shrimp. This species is commonly found in the area and usually grows to about 12 inches long. And that’s not even the biggest stomatopod species, the largest known measuring at about about 18 inches, or 1.5 feet.

Speaking of half feet, if this is a mantis shrimp, it was probably a good thing the fisherman handled it carefully. Mantis shrimp have incredibly powerful claws that strike at 50 miles per hour, used to spear, stun, and dismember prey. The blow is so strong it’s even capable of splitting aquarium glass and has occasionally given them the nickname of “thumb-splitters”. Three guesses why! 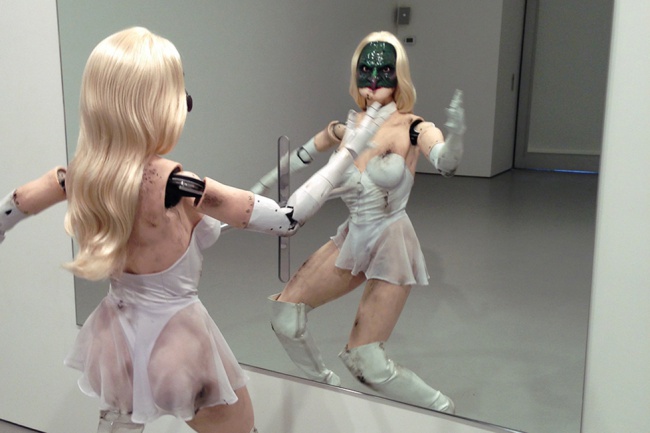 When people think of the robot apocalypse, they usually imagine hardened Terminators or deadly drones breaking the wills of humanity. They usually don’t imagine androids dancing their way through the uncanny valley. But here we are.

This is “Female Figure,” an animatronic doll created by Jordon Wolfson and displayed at the David Zwimer Gallery. Designed in the form of a barely dressed human woman in a witch mask covered in dirt marks, she spends her time dancing to Robin Thicke, Paul Simon, and Lady Gaga, moving in beat with the music and even lip-syncing the lines.

Despite clearly being a robot, many of its details can be especially unsettling. Outside of the dance motions, she can move individual fingers and speaks recorded dialogue with a surprisingly lifelike mouth. But the really creepy part? Face-tracking technology: Female Figure can lock eyes with anyone whose reflection is visible in her mirror, and her gaze lingers as you move across the room.

According to Wolfson, the piece isn’t about women specifically; it’s about exploring the relationship between subject and object by giving art the ability to “look” back at you. You’ll have to decide for yourself if he was successful… if you can stand being watched for long. 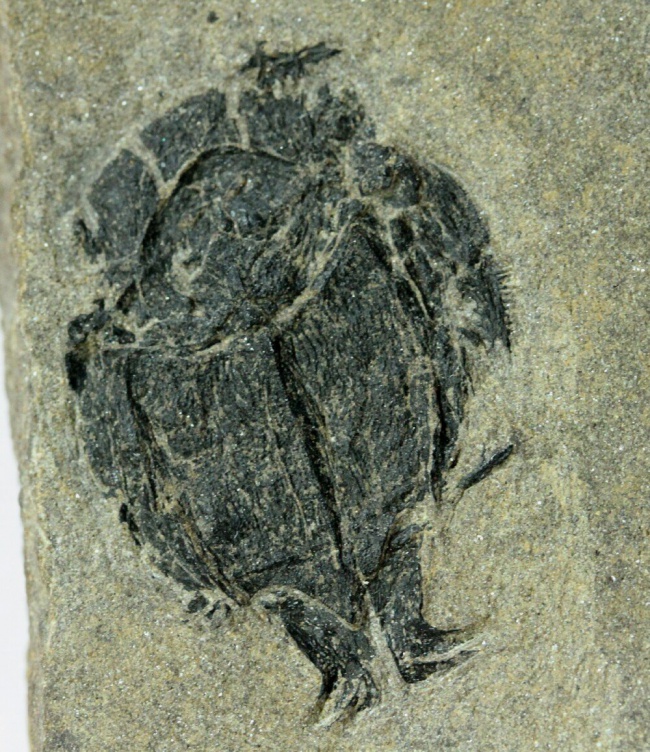 Yup, this is a fossilized set of remains; that’s the easy part. But what’s so special about it? What you’re seeing is possibly the first species on Earth that ever had sex. At least the kind that didn’t involve dumping eggs outside of your body to fertilize them.

Given the name Microbrachius dicki (settle down, class), this fish lived in the ancient waters of Scotland roughly 385 million years ago. Fossils from the area are surprisingly common, but only recently have scientists noticed that the L-shaped appendages are actually male genitals. Unusual, but it’s enough to suggest that sex may have been invented in Scotland. Who knew?

Just like any first time, sexual encounters for this species were clumsy and awkward. The only possible way M. dicki could mate was sideways, using arm-like fins to keep from drifting away from each other while male claspers and female plates locked their genitals into place like velcro. While creative, this wasn’t exactly effective compared to other fertilization methods of the era, so fish went back to egg-spawn mating and left the copulation formula for other species to improve upon.

In other words, these fish were into sex wayyy before sex was cool. That gives them some evolutionary hipster street cred at the very least. 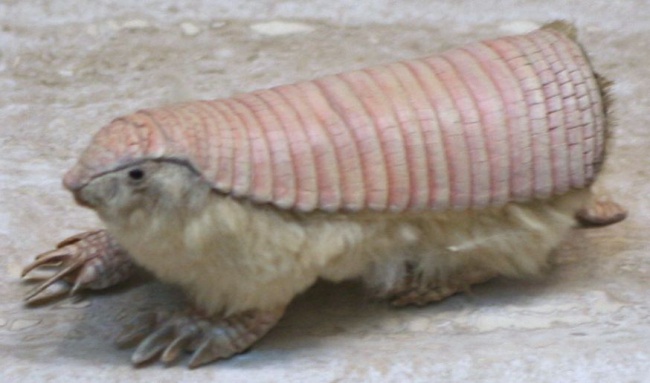 Oh man, somebody took a cute animal and girded it for battle with claws and armor!

Actually, it grew those itself. This is the Pink Fairy Armadillo, the smallest known armadillo species in the world. Unlike the armadillos we’re familiar with, this particular shell leaves part of its sides exposed, although a vertical plate at the rear protects it from behind. Its primary food source is ants and larva, although they’re known to eat worms, snails, and other insects.

Sadly, there’s very little we actually know about this armadillo. Being a nocturnal creature that only resides in Central Argentina makes it difficult to observe, and most attempts to capture and transport them usually result in death from stress. They have great difficulty handling modifications to their environment, temperature, or diet, with most not surviving over a year in captivity. (So if you see one, maybe don’t move it around like they do in that video.)

Scientists suspect that the Pink Fairy Armadillo is currently threatened based on reduced sightings and increasing farmland development. The trouble is, since we saw them so rarely to begin with there’s no way of knowing for sure. Here’s hoping that something that adorable and awesome will be able to stick around. 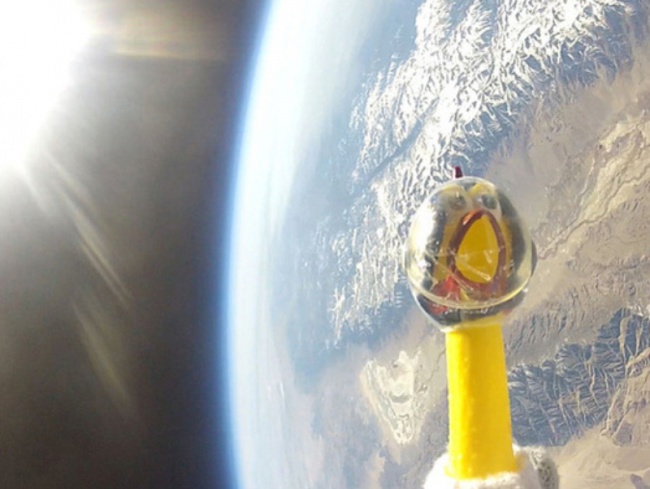 Nothing strange or weird here; just a rubber chicken that made it to space.

Dubbed “Camilla Corona”, this rubber chicken is a mascot for the Solar Dynamics Observatory that assists in educational outreach programs and space missions. Camilla here has been launched into the stratosphere by schoolchildren, been outfitted with sensors to measure solar radiation, and even hitched a ride on a Russian spacecraft to the International Space Station. In other words, this chicken has as much of a successful space career as any human astronaut.

Camilla is now “retired”, but as a mascot, she went a long way to getting kids from various cultural backgrounds interested in space travel, even participating on occasion as this video proves. Although I wonder if she’d be willing to return for these Mars missions NASA keeps hinting at.

And that’s it for this week; how did you do? Feel free to discuss your results in the comments.

Do you have any suggestions for future Strange Science Guessing Game images? PM them to me and I’ll check them out!