One hundred hours is a very long time. How long? Well, it’s more than four days if lived end-to-end. But most of us sleep at night, so 100 hours works out to the equivalent of about one waking week. Or, if you have a normal-type job, 100 hours is two and a half working weeks. Or three weekends. Or in other words: a long time. 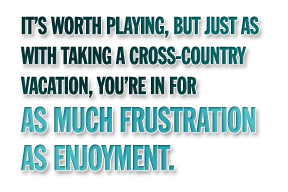 What can you do in 100 hours? Well, you could drive from New York City to Los Angeles and back and still have time to stop for burgers, making it sort of a vacation, if that’s your idea of fun. Or you could make it a real vacation and take that same trip by train and see the country, meet some interesting people maybe have some time to spare. Or you could fly and have a few days to visit Disneyland. Or, if you just like flying, you could fly completely around the world a little over three times with stops along the way, although why you would want to do that is beyond my reckoning.

Let’s say you don’t like flying or taking trains, and you don’t have a car.You could spend those 100 hours reading 10 or so average novels or, if you’re a gamer, playing 10 or so games. That is, unless one of those games happens to be Fallout: New Vegas, in which case you’ll be lucky to get through the whole thing in 100 hours. I didn’t.

What follows is a travelogue of sorts, detailing my experiences during the first 100 hours of playing Fallout: New Vegas. Is the game fun? Well, yes. I wouldn’t have played it for 100 hours otherwise. (As of this writing, I’ve played for another 100 or so.) But in addition to being fun, the game is sloppily coded, visually flawed and buggy as all hell. It’s worth playing, but just as with taking a cross-country vacation, you’re in for as much frustration as enjoyment.

The Gunfight(s) at the Goodsprings General Store
I awaken from having been shot in the head and left to rot in the desert to find myself in the town of Goodsprings. My mission: Find the man who shot me. But first, the town needs my help. I may be a washed up courier with a hole in his head, but I’m apparently the best hope they’ve got … unless the bad guys try to walk through a door and their systems lock up, as happens to me at least twice before I’ve even left the tutorial missions.

After digging around a bit I discover the town has been harboring a fugitive, a wounded wanderer named Ringo, who’s wanted by the local gang. After doing some chores to win some new friends, I gather my posse and head out to face the gang and free Ringo. Unfortunately, this causes my Xbox to crash again. 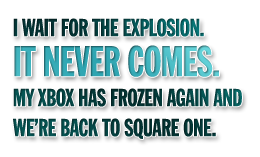 After re-loading from an old save, doing the chores again, re-making my friends, re-gathering them in the saloon and re-loading my weapons, we’re ready. It’s high noon, in the center of town. A tumbleweed blows past as the gang members appear on the horizon. The first shots ring out, one of my posse takes a dynamite charge full in the chest. Another falls dead. Bullets fly every which way, but my aim is unerring. I take out three of the gangers and wound two more. The fight looks to be going my way.

I pick up a stick of dynamite from a fallen gang member and toss it over a rock, hoping to flush out the last ganger standing. I wait for the explosion. It never comes. My Xbox has frozen again and we’re back to square one.

Scorpion Mountain
I’m a few miles south of Goodsprings when I see it: a nest of giant scorpions nestled high up on a hill. There are a lot of them. This is bad.

I crouch into a shooter’s squat, pull out my varmint rifle and try to get a bead on one of the eight-legged freaks. I give it a few shots to the thorax, but that only makes it madder. It’s still coming, and coming fast. A few more shots and it’s down, but that was only the first and judging from my threat detector, there look to be three more – at least.

I edge closer, hoping for a clear shot, and as I get nearer, I realize this group of scorpions isn’t going to be a problem for anyone any time soon. They’re not on the mountain, they’re in the mountain. Victims of a clipping bug, these giant scorpions are embedded in the landscape, unable to free themselves. Lucky day for me. Until my Xbox crashes and I have to do it all over again. This time the hard way, as the scorpions have apparently freed themselves. I die twice and finally give up.

The Man Who Wasn’t There
I’m working for a ghoul named Jason. He’s the leader of a cult trying to get into space using a bunch of old rockets. Problem: A band of invisible super-mutants has taken over their rocket factory. They need the mutants cleared out so they can suit up and blast off. Yeah, these are the level of problems I’m dealing with in the Mojave Wasteland.

I go after the invisible mutants and convince them to go elsewhere. Some of them need more firm convincing than others. Good thing I’m armed.

Problem solved, Jason and his Brothers prepare to blast off, and I’m asked to meet one of his followers in the control room of what turns out to be a rocket launch facility. I go there, but I’m alone. I wait. I wait. I wait some more. My quest indicator tells me I’m where I need to be, but the man I’m supposed to meet to trigger the ending of this quest is not. He’s vanished. Lost in the mess of code that is New Vegas. 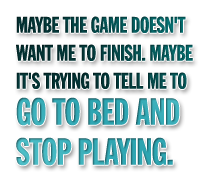 I reload an old save, re-play several hours of the game and luckily enough the man is where he needs to be the second time. Too bad the rockets crash … taking my system with them.

Fear and Aggro in New Vegas
I’m getting close to ending this. I know now what’s going on in the world, my place in it and what I have to do to make things right. Or as right as they can be, anyway.

Seems the game has a problem with me now, though. Maybe I’ve racked up too much bad karma. Maybe it doesn’t want me to finish. Maybe it’s just trying to tell me to go to bed and stop playing.

Whatever. All I know is the crashes are coming fast and furious now, the frame rate is as sluggish as a slide show and every once in a while, random people will fire on me for no good reason.

I’m at Camp McCarran, just minding my own business, when two government troopers open fire. I put bullets in their eye sockets, but the local authorities don’t buy the “self defense” excuse. I get dinged with demerits on my reputation. Wasn’t even my fault.

The Good, the Bad, the Selfish and the Broken
I’m near the end of the game and I have to choose sides. I decide to throw in with the NCR, the group that represents what passes for federal authority in the Mojave. I don’t like some of what they stand for, but at least they don’t hang people from crosses like Caesar’s Legion or give me the creeps like Mr. House and his army of robots.

I pull a few tricks for House, just to earn some caps and move the story along and then, out of the blue, I’m told the NCR won’t deal with me anymore. Seems they have a beef with House. The fact I’ve been running all over the damn wasteland like a butt boy for the NCR doesn’t seem to matter. The fact that I’ve completed more missions for idiots in the NCR incapable of moving a box of stuff from one part of town to another on their own doesn’t get me anywhere on their “Like-o-meter.” I’m either House’s or theirs, they say and without being given a choice, I’ve made my choice. Game over. Shit.

I reload from a save and try again to trigger the ending I want. I play by the hidden rules and then make my way to the Hoover Dam to get on with finishing the battle on the NCR’s terms. That’s when the shooting starts. Seems they’ve decided to go aggro again for no reason. As soon as I walk into the room, the entire NCR army opens up on me. I can’t even get close enough to say “I’m here to help.” More like “I’m here – ” BLAM! Game over.

This is the point at which I lose my mind. I crack a strategy guide for the first time, hoping for a clue. Nothing. So I turn to the internet. Guess what? It’s a known bug. If you do the things that I did in the order in which I did them, the NCR will try to kill you. This makes no sense. It isn’t supposed to happen, but it does.

This ending is now unfinishable for me. Time for Plan B, I guess. Assholes.

The Final Battle (With System Lock)
It all ends the only way it could have ended: with bullets and blood. The Legion marches on the Dam, the NCR mobilizes to meet them, and me and my robot army and a cross-dressing super mutant roll in from the flank, taking everyone by surprise.

Although I’m basically an unstoppable badass at this point, it’s still a close fight. The NCR go down easy, but the Legion mount an effective counter-attack. My super mutant follower bites it on the second or third charge leaving me to take down a good half dozen of Caesar’s best men.

It takes everything I have, but in the end, I prevail. The top of the Hoover Dam is littered with bodies, covered in blood (some of which is mine) and at long last – it’s quiet. I take a moment to look around and savor the victory. The view spreading out in both directions, down the Colorado River and across Lake Meade, is striking. Too bad my damn Xbox is stuttering like Porky Pig.

That’s when the Boomers show up with their refurbished B-29 bomber. They’re late to the party, but that’s not my biggest concern. Seems drawing the bomber is a polygon too far. The Xbox stutters once, then dies.

Russ Pitts is the Editor-in-Chief of The Escapist. To date, he has been playing New Vegas for about 200 hours and has found enough bugs to be named an honorary QA tester.