Probably the most overused and abused backhanded compliment in entertainment criticism is “it’s good for what it is,” typically used as a synonym for “the person reviewing this liked it, but knows they are supposed to be above it.” It’s practically a reflex – I’ve likely done it myself many times. It really is kind of a cop-out, allowing one to credit the individual movie/game/book/whatever while simultaneously affirming that you still loathe what it “is” or “stands for,” all without the danger of audience alienation that might result from “if you like that sort of thing.”

And yet, sitting and watching a screening of That’s My Boy, the newest offering from Adam Sandler, “good for what it is” was really the only phrase I could conjure to describe it. It’s a vile, puerile, lowbrow, totally disposable junk movie, but I can’t deny that it works as one. I can’t say that I didn’t laugh, and while it’s up for debate whether or not these jokes needed to be told or if the world is worse off for their telling, the mechanics of the humor are sound – no small feat, considering that the tone of the thing can be neatly summarized by telling you that one of the principle supporting characters is Vanilla Ice playing himself.

By now, I imagine it’s roundly understood that Sandler – like Will Smith – is a movie star who appears to approach his career more as a business venture than the exercising of a craft (fittingly, neither man was ever an actor first – Smith is a musician and Sandler a stand-up comic) and that he works in two distinct brands of filmmaking: Movies Where Adam Sandler Appears (higher-end “dramedy” fare like Punch-Drunk Love or Funny People) and Adam Sandler Movies. This second group lately feels very much like make-work projects designed less to enrich the comfortably wealthy Sandler than to provide job security to Sandler’s ever-growing roster of less bankable comedian/comedy writer friends and Hollywood cash infusions to the New England-area communities he often insists on using for filming locations. (If nothing else, you can’t say he’s forgotten where he came from.) That’s My Boy is clearly the latter variety – a broad, proudly sleazeball comedy with a huge supporting cast shot mostly in and around Boston and Cape Cod.

The premise? As a 13 year-old, Donny Berger (Sandler) was seduced by his sexy (adult) math teacher. When their affair was discovered, said teacher went to jail for statutory rape while Donny became an instant tabloid media superstar, cheered as a kind of fantasy living stud-in-training (this is as close as a Sandler movie has ever come to insightful cultura satire) and briefly wealthy from selling his story (his autobiography was called “Head In The Class.”) He was also given custody of the son that resulted from the affair, and since teenaged tabloid celeb Sandler was about as good at parenting and money management as you’d expect, the present-day middle-aged Donny is a broke burnout who hasn’t seen his son, Han Solo (heh) since he bolted at 18.

Facing jail time for tax evasion (“I thought they were taking it out automatically!”) Donny’s last hope is a big payday promised by a sleazy TV host if he can arrange a televised reunion between himself, Han and Han’s still-imprisoned mother. Conveniently, he’s also just discovered that Han (Andy Samberg) – having changed his name to Todd Peterson and invented a phony backstory for himself – is now a rising star businessman currently residing at his boss’s swanky Cape Cod mansion and about to marry his too-perfect-by-half fiancée (Leighton Meester).

So, yeah, it’s another “Oh, no, my uncouth/boorish jerk buddy just showed up in my fancy/straight-arrow new life!” comedy, kicked up with the twist of the buddy secretly being the straight man’s father – a fact that would make things bad enough even if Donny wasn’t a lecherous, perpetually intoxicated creep. Which he is. This shtick hasn’t really changed throughout the decades, and the movie you’re imagining in your head is pretty much the movie they’ve made. Ho HO! Everyone is wearing fancy dress clothes but Donny wears a tie with his t-shirt! HAH! But it’s okay because shockingly everyone but Todd thinks he’s endearing and fun! LOL! The fancy men went to a spa and Donny thought it was a brothel! Old ladies talking dirty? Check. Nasty strip club with one “hilariously” overweight performer? You betcha. Fat people falling over? Blow-to-the-head humor? Sandler doing the whole movie in some kind of unplaceable speech impediment? All present and accounted for. 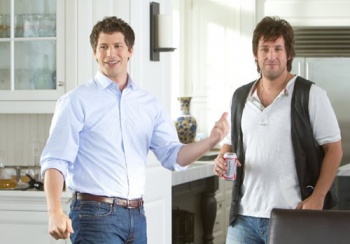 You either like this sort of humor or you don’t. It’s not exactly my favorite flavor of comedy, but I know what it looks like when it’s working versus when it’s not. The jokes are easy and the targets are broad and cheap, but there are more hits than misses, though the misses tend to be the longer, drawn-out bits and there are a few too many. Sandler’s sensibilities generally aren’t my cup of tea (there are only so many times “Oh, god, did he really just do/say that?” can work as a punchline in one movie) but this is easily the best his signature style has worked in a long time and the basic formula of “Donny does something horrific, Han/Todd looks frantic and uneasy” works comedically and will probably hit home for audience members with less than perfect parents of their own.

What actually seems to be the biggest help of all is that, while the majority of Sandler’s films have been PG-13 versions of his very R-rated live/album persona, That’s My Boy actually goes for the R. It almost sounds like a betrayal of taste to suggest that allowing grosser visuals and raunchier jokes is a huge improvement, but it does help things feel more naturalistic. Operating on a scatological plane only slightly stickier than Beavis & Butthead or Ren & Stimpy worked for Sandler back when he was a younger comic making movies aimed at younger teenagers, but as his fanbase and comic perspective grew up (or at least grew older) the Junior High puerility felt more and more out of place – see: Jack & Jill.

If nothing else, freedom from the PG-13 constraints allows the film to follow Sandler and company’s standard bad-taste gags to their darkest logical extremes. The opening scenes involving young Donny and his teacher are profoundly uncomfortable, which helps the expectedly obvious gags (“Ha! She wrote a dirty message on his pop quiz!”) work – in a relative sense – as cathartic release. A running subplot involving Meester and her psychotically overprotective Marine brother (Milo Ventimiglia) works over a familiar gag from other “meeting wacky soon-to-be in-laws” movies, but takes it right up to the edge, and then jumps over it with sicko/show-off glee in an extended scene that had my shocked preview screening audience gasping/guffawing so loudly I missed a good bit of the dialogue (though it mostly seemed to consist of Donny gagging and looking bewildered). It’s kind of incredible that Meester and Ventimiglia – both considered to be rising stars with reputations to consider – agreed to participate in what’s probably going to wind up being a notorious “I can’t look at that dude/chick the same now” moment.

In fact, the main thing that seems to keep the film stranded in “pretty good for what it is” territory instead of just simply “pretty good” (apart from the not funny parts being really not funny) is the presence of Sandler himself – he’s miscast in his own movie.

I won’t deny that Sandler is a tremendous comic talent – anyone who’s seen his SNL work or especially his live shows can attest to that – but his best work acting-wise has always been as the straight man to wackier characters around him. The better Sandler movies have consistently been the ones where he was the normal guy (think Billy Madison, Wedding Singer, Click) while his funny-voice/mannerism bits in Little Nicky or The Waterboy grated.

Donny Berger: The Dad From Hell should be a much darker, meaner, more dangerous character (think Gary Cole as Reese Bobby in Talladega Nights) to keep the tension of the situation high, but he isn’t – even though he’s been written that way – because it’s so clearly just Adam Sandler in cartoonishly-disheveled clothes and a bad wig doing a funny “Drunk Boston Guy” voice. A nearly homeless-looking vagrant stumbling around an upscale cocktail party, Budweiser in hand, looking ready to start punching/groping/defiling anything that moves should be alternately threatening or pathetic, but here it’s just “Aw, it’s okay – it’s just Adam Sandler doing ‘Drunk Boston Guy.'”) Midway through the screening, it occurred to me that any number of Sandler’s perennial sidekicks (particularly David Spade or Rob Schneider, who’re both better at character work than he is) might’ve been better in the role.

I can’t in good conscience recommend that anyone see That’s My Boy, but I was surprised to find myself not actively despising it – if nothing else, it’s not nearly the complete conceptual/execution failure that Rock of Ages is. Most things have an audience, that audience isn’t always me, but people who feel like they might like That’s My Boy probably will.