Attack speed in Diablo 3 can be a confusing topic. Your initial impression may be that attacking faster is always better, but upon some reflection, you’ll quickly realize that that isn’t the case. So let’s talk about why faster attack speed is not always desirable, and the related issue of how to know whether a weapon with a different attack speed from your current weapon is an upgrade or not.

Do I want “Increases Attack Speed” on my gear?

In the current meta* of Diablo 3, Attack Speed has largely fallen out of favor. While this may change in the upcoming patch 2.2, for the time being, slow-hitting two-handed weapons reign supreme over faster one-handed weapons. This is partially due to generally being able to achieve more damage with two-handed weapons, as well as two-handers possessing certain indispensable Legendary attributes, but the most prevalent reason boils down to resource management.

Yes, faster attack speed will make you hit more often in a given time frame, thereby increasing your DPS*. Stacking attack speed makes the Damage figure in our character sheet rise, stroking our ego and making us feel good about how powerful our character is. However, that number is unrepresentative of actual combat scenarios. 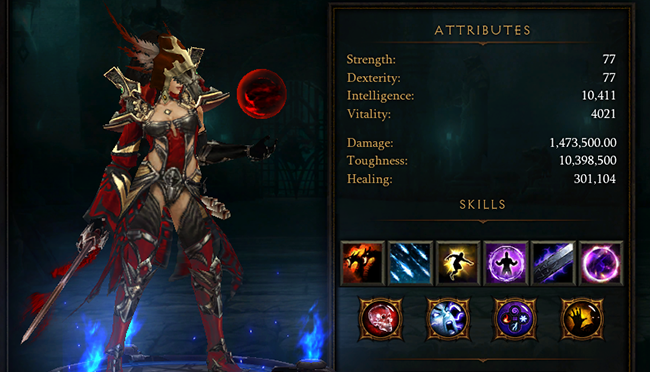 The problem with the Damage figure is that it assumes continuous, uninterrupted, infinite attacking. In other words, it assumes you never have to stop attacking in order to travel to the next pack of monsters, you never have to dodge an incoming attack, and you never run out of resources. How often is that the case for you? Roughly zero percent of the time? Thought so.

That last point is particularly important – faster attack speed less efficiently spends your resources. If I’m a Demon Hunter with 125 Hatred and I want to cast Cluster Arrow, which costs 40 Hatred, does it really matter how fast my attack speed is? I can get off three shots before I’m out of Hatred – whether I get off those three shots in three seconds or two seconds is far less important than how much damage each of those attacks is dealing. Critical Hit Damage, Critical Hit Chance, or a slower weapon with higher base damage will all result in more damage per Cluster Arrow. In other words, you’re getting more bang for your buck, spending resource less often but making each expenditure deal more damage.

The current meta is focused heavily on builds that do not use resource generating attacks and instead only focus on resource spending attacks. Or rather, they rely on their resource spending attacks to deal the vast majority of their damage. This means that once you run out of resources, your DPS is effectively zero, and your attack speed doesn’t really matter. You want to get the most out of every point of resource you spend, and you do that by opting for Critical Hit Chance and Critical Hit Damage instead of Increases Attack Speed whenever the option is available.

*Check page 2 for a glossary.

Is this weapon an upgrade or not?

In general, assuming equal damage, a slower weapon is the better choice over a faster weapon. Of course, this will ultimately depend on your build, but this rule currently holds true for most end-game builds that push high Greater Rift levels. 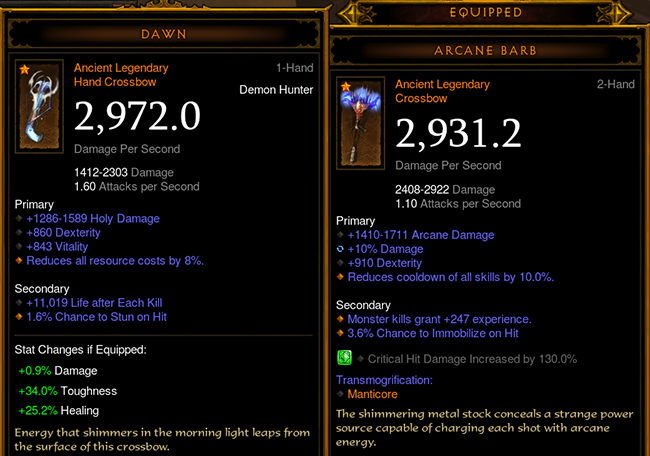 The Dawn has a higher listed DPS value, but a higher attack speed as well. To find out how much damage a weapon deals per hit, you simply divide the listed DPS number by the number of attacks per second. For the Arcane Barb, that would be 2931.2/1.1 = 2664.7. The Dawn, on the other hand, comes out to 1857.5 – that’s actually a drop of about 30%! In other words, every single shot from the Dawn is about 30% weaker than every shot from the Arcane Barb.

Now, you may note that we can enchant the Vitality on the Dawn and reroll that into +% weapon damage, like the Arcane Barb has. Is it worth rerolling the Dawn to compare the two again? Once again, math answers our question. In order for both weapons to hit with equal damage per attack, the Dawn’s DPS number would have to be 4263.5 – which is far more than what a +10% damage affix can provide!

(Remember: When comparing two items, hold shift to ignore any gems they contain.)

Now again, there are builds that benefit from a high attack speed. If resource management isn’t an issue, then attacking more often generally helps. If your build requires you to hit very often in order to trigger an effect, attack speed can also benefit you. Do bear in mind though that skills that apply a DoT* aren’t served by faster attack speed, since applying the DoT a second time will simply refresh it without stacking.

DoT: Damage over Time. An attack that applies an effect that deals a certain amount of damage spread out over a certain number of seconds.

DPS: Damage per second. The amount of damage you deal per second, on average, with a basic attack that would deal 100% of your weapon damage, factoring in critical hits and your attack speed. On your character sheet, this is simply called Damage.

Meta: Short for “metagame,” which roughly translates to “beyond the game.” While this term has different meanings depending on the genre of game, in the context of Diablo, we are referring to the current strategic trends among the playerbase.