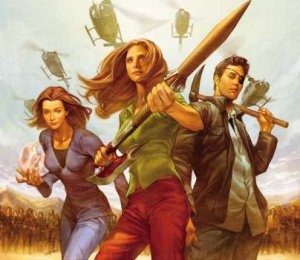 Welcome to “What’s Actually Good,” the column that looks at what’s to come and what’s currently out in the colorful world of comics. In this issue, I resist the urge to use the horribly generic vampire pun ‘sink your fangs into this’ when I discuss Whedon’s Buffy Season Eight and discover that you can actually buy a Green Lantern ring over eBay in preparation for Green Lantern: The Blackest Night.

My childhood pretty much consisted of three things: watching Buffy the Vampire Slayer, playing Goldeneye on the N64 and reading Amazing Spiderman comics. It was a good time for me. So, along with Bond and Spidey, Buffy has a special place within my adult psyche. As it goes, Joss Whedon’s Buffy the Vampire Slayer Season Eight has now been published for an entire year, so (in lieu of a Goldeneye comic) I felt it was time to weigh in.

Continuing directly from the events at the end of Season 7 with the entire town imploding and hundreds of Slayers roaming the world, Season 8 continues the story of Slayer extraordinaire Buffy and her hapless comrades. With the destruction of Sunnydale, the team has relocated to a castle in Scotland that serves as a base of operations and training ground for the Slayerettes. With these changes comes an interesting shift from the original series: Buffy is now the leader of a new world power. Kickass! This obviously upsets the other power bases, provides the foundation for the first story arc and draws on a major theme throughout the entire series.

Whedon has wisely taken the same level of creative control over the comic as he did with the TV series. He writes key stories here and there, but otherwise allows different creative teams to fill the gaps with their own tales. This has worked well, mostly due to the quality of the fill-in writers. Brian K. Vaughan wrote an excellent 4-part story titled “No Future for You” featuring Giles and Faith, and long time Buffy TV writer Drew Goddard has most recently begun a new story arc.

What we have, then, is a series built under the watchful supervision of Whedon with contributions by some of the best in the business. Success! One can’t help but wonder if the greater comic industry would do well to adopt this TV-like model of development.

The artist for most of the series so far has been Georges Jeanty, and he has supplied us with a solid, if a little generic, 10 issues of pencils. Allow me to quickly explain what I mean when I say “generic”: He is well suited to the role, no doubt; his artwork is clear, concise and for the most part captures the characters perfectly. When I say “generic” I simply mean the artwork won’t blow your mind, but instead simply satisfy it. It expresses the stories well and that’s all that is required.

Some exciting things have happened, including some characters coming back from the dead as well as some more … controversial changes. I am too professional to include spoilers within my reviews, so I will allow this news report to do it for me. Click it for spoilers regarding the latest issue of Buffy, and enjoy.

The series is building upon the Buffy stories of old while going in a new direction that’s sure to keep both original fans and newcomers happy. The next issue will be available April 4. Check it out. 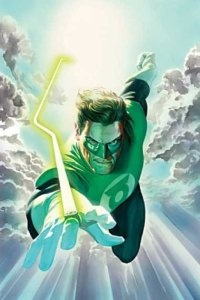 Geoff Johns has been the golden boy for DC for many years now, and has produced both outstanding and average books during this time. With runs on Flash, Justice Society of America, Teen Titans, Action Comics, Booster Gold and more, he has made his mark on the DC universe and is set to continue his strong run on Green Lantern with the 2009 event, The Blackest Night.

Geoff has had a hand in shaping Green Lantern since his introduction to the series with the single issues as well as larger events such as the spectacular Rebirth, where we saw the return of Hal Jordan, and the epic Sinestro Corp War only last year. The Blackest Night looks to be even bigger and better than its predecessors, and is set to be both the culmination of these events and the climax of Johns’ run on the book.

Allow me to set the scene so far: After the events of the Sinestro Corp War, the rules of the game have been rewritten as the Guardians have seen fit to allow their rings to utilize lethal force, taking the Corp down a path Hal never thought could happen. In the latest issues of Green Lantern, we see the formation of different Corps representing many other colors and emotions (including a mysterious Black Lantern Corp), as well as the Alpha Lanterns, who were created to police the Lanterns and their new powers. It’s all setting the scene for another intergalactic war of which they shall be at the center.

Johns, like most of my favorite writers, knows how to write a hero (you would be surprised how rare this is with superhero comics) by crafting wonderful action scenes and kick-ass heroic moments for his characters. He can also add a touching and heartfelt quality to his characters if called upon to, most notably in JSA and before then The Flash. When writing for a Green Lantern character you have to be especially imaginative, and Johns has proven that he can deliver something exciting and unique each and every time.

The book is actually over a year away, due sometime during the summer of 2009, but I suggest this series to you now so that you might prepare for it. Get out there, read the Geoff Johns Green Lantern books and get excited for a superhero space-opera extravaganza.

In the next issue of “What’s Actually Good”:

See you in two weeks!