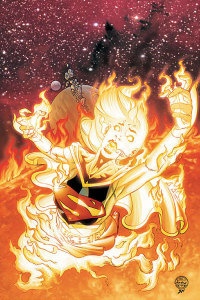 Welcome to the finale of “What’s Actually Good!” In this special issue I look at how Kelley Puckett takes a coming-of-age approach to Supergirl to great effect and discuss Amazing Spider-Man in relation to Brand New Day and the series so far. All this, plus the news that there’s going to be a Mortal Combat/DC Universe crossover fighting game? How odd.

I surprised my friends a few weeks back when they noticed I suddenly had Supergirl in my standing order at the local store. The book was only introduced to me a few months back, and since then I have loved every issue from the current team. See, there’s one good reason everybody should be reading Supergirl right now: Puckett has made Supergirl human again.

Written by Kelley Puckett with pencils mostly by Drew Johnson, Supergirl over the last 6 issues has come into it’s own as a DC superhero book. Gone are the teenage childishness and uncomfortable sexuality I found in previous stories, replaced by a more down-to-earth and honest interpretation of the character. Sure, the book is still about a new, young heroine with nearly incalculable power trying to come into her own as a superhero under the tutelage (and shadow) of the greatest hero the world has ever seen, and that’s all good. But this time, it has been written in a manner that takes the character far beyond what we have seen before. She makes mistakes, yes; not the “Tee hee, I just tore the wing off a plane” mistakes but honest errors that all teenagers make at some point in their lives, just on a greater scale.

At this point in the story, Supergirl is naively trying to find a cure for cancer after she promised a five-year-old kid that she wouldn’t let him die. Obviously questions have been raised as to whether such a thing is even possible or if the superheroes really should have such a profound effect on the world. It’s a classic growing up story, written perfectly and examining an interesting topic hardly covered in even the more popular superhero books.

Not only does Kelley capture Supergirl in a great light, but her supporting cast including Superman and Wonder Woman, too, as they frequently appear in the book to either assist in the action or bring her back down to earth. The mentor aspect of her relationship with Superman is particularly good. He’s not simply trying to shield her from evil, but help her learn her own way.

Johnson draws the book well with some solid pencils. His version of Supergirl likewise does away with the old and tempers the sexuality with some more realism. She looks stronger and more like an athlete instead of the skinny, buxom girl you might have seen earlier. It’s a welcome change.

Supergirl takes a classic coming-of-age theme and mixes it with Superheroes and some pretty mature stories. Morality, restraint and the ultimate role of the hero are all things that Supergirl must learn about if she is to be the hero the world needs. So far under this team, I would say she is well on her way.

The current Amazing Spider-Man series with the Brand New Day tagline is now four months in after the One More Day retcon fiesta, and while it’s not all bad I certainly have a few issues on the whole. So what has happened in the series? Well …

Let’s entertain a fantasy of mine and pretend I had complete creative and executive control over any and all books currently in the Marvel universe. Now let’s imagine what it would be like if I was struck by a sudden wave of nostalgia for the Spidey books that I used to read and love when I was kid. Now imagine me directing all my writers and editors to write a story that returns Spider-Man to that period in his life that I so fondly remember and undo almost everything that has occurred character- and story-wise since then. What would the end result be? Well, suddenly Peter’s parents would still be alive (and not robots), Carnage would be rampaging through the New York streets and there would more than a few clones running about. Basically, the book would read and feel like it was produced in the early ’90s. Sounds pretty awful, right?

This is exactly what Joe Quesada has done with Amazing Spider-Man, although he has taken Peter even further back in time with an even heavier hand than I could ever manage. Harry is alive, Peter is not married and mountains of great stories have been tossed out so that all can enjoy the book for the same reasons that Quesada first did. Thanks, dude!

So far since the radical changes to the status quo we have seen the work of four different writers and four different artists, with three issues being produced each month. Each creative team features a new story obviously linked with what has gone before it.

The first thing you will notice after the first few stories is the huge amount of editorial influence that is present in each issue. To its credit, each issue does have that nostalgic feel that Quesada was trying to capture. There’s an almost whimsical, childish innocence to the book again that does take one back, but this comes at a cost. Each different creative team feels exactly the same. It’s almost as if it was a single writer for the entire lot instead of the three unique voices that are Dan Slott’s, Marc Guggenheim’s and Bob Gale’s.

Then something happened. Zeb Wells got to script a month along with outstanding artist Chris Bachalo. Suddenly the book felt unique, special, apart from the rest and, most impressively, entertaining as well. Spidey was actually witty, the story was imaginative and the artwork and action were wonderful. The book featured good character writing new and old, a mystery and plenty of action. Most importantly, it didn’t feel like a clone of the other books but still part of the ongoing stories. It’s a small thing, sure but it makes all the difference. Confidence restored!

Dan Slott is writing the next story, due in a few weeks, and while I am glad to see Barry Kitson (who I have mentioned in this column before) pencil the next three issues, I can only hope that Dan takes a page out of Zeb’s book and allows his own unique voice to tell the story and keep the series rolling. With any weekly book (well almost weekly) like 52 or Countdown, there are always dangers when mixing up the creative teams. However, as long as they keep the good teams coming and don’t allow the book to get stale (as it was in serious danger of doing), there’s every reason to continue to be interested in the adventures of ole Webhead.

The next issue should be out in a few weeks. While initially upsetting for hardcore fans, it’s not hard to see that it’s a good point of entry for new readers, so if you are interested in a lighthearted, fun read, give Amazing Spider-Man a shot.

A friend recently showed me these videos promoting the upcoming game Mortal Kombat vs. DC Universe. The first thing that came to mind was the obvious issues that the developers would have producing such a game. However, it seems that most of these issues have been addressed in their own way.

Keeping with the videogame theme, here’s news that there will be a Gears of War comic soon to be published by DC. Hopefully it will be as solid as Bendis was on the Halo book.

Woops! Looks like the Justice League movie won’t be happening after all if this rumor is correct. Stick to the animated series, guys; let’s see more JLU episodes.

What’s Actually Good this coming week? Take a look at Northlanders No. 5 from Brian Wood, Mighty Avengers No. 12 from Brian Michael Bendis, Uncanny X-Men No. 497from Ed Brubaker and finally Batman No. 675 from Grant Morrison.

Well, that wraps up the last issue of the series. I hope all of you who took the time to read it enjoyed the last four months of reviews, news and other miscellany. If the series got just one person interested in reading a comic book, then I feel my work is done. Big “thank you” to The Escapist for giving me the space to rant about my passion; it was a great experience and rewarding on many levels. If you want to see some of my other writing and random junk, I’ll be posting whatever I come across in my travels on my blog at http://cloudcuckooland.whiteshock.com. Otherwise, be good and read some comics!