NOTE: By necessity, the following article contains massive spoilers for Thor, as well as The Incredible Hulk, both Iron Man movies, 75+ of Marvel Comics continuity and potentially some aspects of Captain America and The Avengers.

I can only imagine that being a “regular” audience member in an opening weekend theater for any of the films in Marvel Studios’ now more-than-halfway completed project in shared-universe moviemaking building up to Avengers is fairly surreal; the camera keeps panning by pieces of furniture or seemingly random background characters and half the theater is suddenly gasping in excitement for reasons you cannot for the life of you perceive.

Last weekend’s summer kickoff epic, Thor is chock full of such moments though, unlike prior Avengers lead-ins, it’s fairly subtle about them … with, of course, the exception of its post-credits bonus scene, the “big reveal” of which stands as one of the series’ all-time “inside baseball” references.

Confused? Confounded? Wondering which ones you missed? Let’s get into it, in no particular order …

The Eye of Agamotto

This I was not expecting, and it may be the most interesting item in this piece as it’s essentially teasing a Marvel/Avengers film that hasn’t actually been officially announced yet.

Odin’s (Anthony Hopkins) Weapons Vault is one of the primary locations of Thor, a storehouse where the King of the Gods keeps cosmic super-weapons collected from vanquished foes in his warrior days. The film proper is concerned mostly with the Casket of Ancient Winters as a central plot point, but the place is packed with relics culled mostly from Marvel Comics’ “magic-side” stories. A few of them are hard to distinguish offhand (people tell me you can see the Infinity Gauntlet that surprised everyone at Comic-Con, but I didn’t spot it in the film myself) but one gets a full-scale close-up: a pair of crescents enclosing a glowing orb that hovers in place, looking like an eyeball.

This is The Eye of Agamotto, one of the relics that will (presumably) one day be used by the Sorcerer Supreme, Doctor Strange. As is the way with most magic charms in the Marvel canon, The Eye does pretty much whatever the writers want it to do, though its main function is usually letting Strange perceive and affect entities and events that mortals typically cannot.

For those who perhaps skipped the Iron Man movies but did see Thor, the shadowy government agency that quarantines the magic hammer Mjolnir, interrogates Thor and confiscates Jane Foster’s Asgard-related research is called S.H.I.E.L.D. Ostensibly, they’re supposed to be in charge of the “weird-ass unexplained stuff” side of National Security, but their appearances and actions in the films so far heavily hint that they are aware of some looming threat that connects the various Marvel Universe movies and are maneuvering to thwart it.

Central to this undertaking seems to be “The Avengers Initiative,” a government-backed team of specially-powered individuals introduced by S.H.I.E.L.D. director Nick Fury (Samuel L. Jackson) in the post-credits scenes of Iron Man and the running B-story of Iron Man 2. This is also the “team” mentioned by Tony Stark (Robert Downey, Jr.) in his cameo in The Incredible Hulk. For the record, in the comics continuity, Thor was one of the five founding Avengers (Iron Man, Hulk, The Wasp and Ant Man were the others) and Thor villain Loki (Tom Hiddleston) was their first enemy. 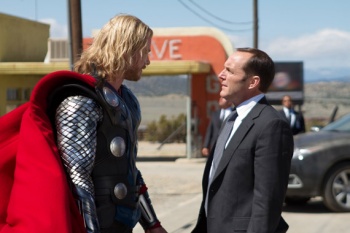 Actor Clark Gregg scored a minor role as a quietly confident agent of what was eventually revealed to be S.H.I.E.L.D. in the first Iron Man partially by being a buddy of director Jon Favreau. In a classic Hollywood story of unlikely stardom, his character – Coulson – has since become a central figure to the entire Marvel Cinematic Universe as Nick Fury’s field operative, appearing in all of the films except Hulk thus far and getting a big role as the “second act heavy” in Thor. In Iron Man 2, he makes reference to a “situation” in New Mexico, and after that film’s credits he’s seen there informing S.H.I.E.L.D. that Mjolnir has been found.

My favorite gag in this movie, incidentally, is that Thor – who, like the other Gods speaks Rennaissance Faire English – calls him “Son of Coul.”

When Thor storms the S.H.I.E.L.D. base attempting to liberate Mjolnir, Coulson orders a sniper to draw a bead on him. The S.H.I.E.L.D. triggerman in question forgoes a rifle, instead grabbing a compound bow and arrows. It’s a few moments later when we get a look at his face, and it’s Jeremy Renner from The Hurt Locker. But Coulson calls him “Agent Barton.”

This would be Clint Barton, aka “Hawkeye,” another Avenger-to-be.

ITC (“in the comics”), the second “revamped” permutation of The Avengers initially consisted of Captain America leading a group of reformed bad guys: Quicksilver, Scarlet Witch (he runs fast, she does magic, they’re Magneto’s kids, it’s complicated) and Hawkeye; who is a normal human but really, really good with a bow and arrow. This movie version, thus far, seems to more closely resemble the “Ultimate Marvel” version of the character; where he, Quicksilver and Scarlet Witch were effectively S.H.I.E.L.D’s “wet work” outfit. There’s some confusion as to whether those other two are allowed to appear in these movies, as Fox Studios supposedly owns the movie rights to all characters related to the X-Men franchise.

Hawkeye being a vital member of the proposed team is one of those things Avengers viewers will presumably just be asked to accept, as realistically, it doesn’t make much sense that “I’m reasonably skilled with a weapon that’s been obsolete since the 1400s” stacks up all that much next to “I’m the perfect physical specimen,” “I’m wearing a robot,” “I’m a literal god” and “I’m The Hulk” in terms of power sets.

When S.H.I.E.L.D. turns up to mess with Jane Foster’s research, her older colleague Dr. Erik Selvig (Stellan Skarsgard) knows who they are … and knows not to get in their way. He later explains that S.H.I.E.L.D. “disappeared” a colleague of his, who he describes as “an expert in the field of Gamma Radiation.” Heh. Cute.

Selvig is almost certainly talking about Dr. Bruce Banner, aka “The Incredible Hulk;” though it’s amusingly possible that he could also be referring to Samuel Sterns, last seen (in the person of actor Tim Blake Nelson) having a strange reaction to spilled gamma-irradiated sludge in the 2nd Hulk movie – the implication being that Sterns is on his way to adopting his more familiar identity as perennial Hulk antagonist “The Leader.” 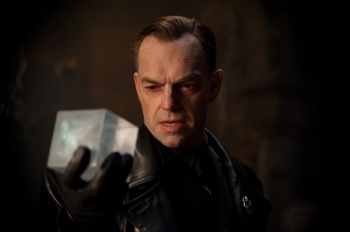 In a bonus scene that runs after Thor’s ending credits, Dr. Selvig meets up with Nick Fury in a S.H.I.E.L.D. installation. They’d like him to take a look at something they’ve found. Fury opens a metal suitcase to reveal a cube, about the size of a human fist, glowing with some kind of cosmic energy.

Ladies and gentlemen, The Cosmic Cube.

“The Cube” (it’s assumed the movies will use the less silly-sounding “Tesseract”) is the Marvel Universe Excalibur/Holy Grail/Aladdin’s Lamp all-powerful macguffin, a “containment device” (series of devices, technically) of alien origin that houses massive levels of cosmic energy and gives anyone who can “control” it the power to reshape matter and reality itself at will. So it’s a Magic Rock that grants wishes, basically. Its origins are convoluted in the extreme, but it ultimately ties back to the Skrulls, Marvel’s perennial alien-invader heavies who have been heavily hinted at as prospective Avengers enemies.

Attempting to acquire/harness its power has been a driving goal for almost every sufficiently powerful supervillain in the Marvel canon at one time or another; particularly Johann Schmidt, AKA “The Red Skull,” the antagonist of the upcoming “Captain America” movie, early publicity stills of which have indeed shown Skull actor Hugo Weaving holding up a cube-shaped prop. It also may be worth noting that in Iron Man 2, when Tony Stark is going through his father’s declassified files, one of the items seen is a sketch of a hypercube.

I had a feeling this was coming, and the reveal still nearly knocked me out of my chair. Not only would I never have expected to see this particular item in an actual movie, its presence essentially busts the possibilities door wide open. “The Cube” is the ultimate “does whatever we say it does” handwave device in comic book lore, existing for the sole purpose of making whatever the writers want to happen happen “just because.” Conceivably, it could serve that same function for getting Avengers scenarios moving with minimal setup: “Why are there dinosaurs in New York suddenly?” “Cosmic Cube!” “Where did that army of walking trees come from?” “Cosmic Cube!” “How are they on the moon, exactly?” “Cosmic Cube!” “Didn’t that guy used to be played by a totally different actor?” “Cosmic Cube!”

The aforementioned Cube scene also drops another slightly-less-shocking point: Loki is still around, in some form (he seems to be either possessing or influencing Selvig). Interestingly, he seems to recognize the Cube.

Taken on its own, it makes a workable setup for future Thor sequels, though it does serve to remind fans that The Avengers of the comics originally assembled in the first place to fight Loki. Well, okay, actually they assembled because Marvel had pre-booked printing time and were coming in late so Stan Lee and Jack Kirby quickly thought up a team book using pre-existing characters in order to meet the deadline, but you get the idea.