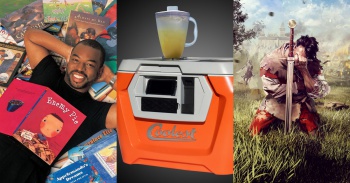 Kickstarter had a strong 2014, leading off of a good 2013. Last year 3.3 million people around the world pledged a total of $529 million to 22,252 projects. Now Kickstarter has revealed the platform’s year by the numbers, including details on which days and times were the most popular for pledging and which projects earned the most backers.

To no one’s surprise, the Kickstarter for Reading Rainbow, a TV show from 1983 to 2006 encouraging children to read, raised $5.4 million from 105, 857 backers. The project is the fifth-most funded Kickstarter of all time so far; it has the most Kickstarter backers even before 2014. Spearheaded by Levar Burton, host and executive producer who also played the role of Geordi LaForge in Star Trek: The Next Generation, Reading Rainbow will be transformed into an internet program with free access to at least 13,000 underfunded classrooms, and the show will be on mobile devices and consoles. Seth MacFarlane pledged an additional $1 million to the project on his own, bringing it over $6 million.

The second most-backed Kickstarter of 2014 was the COOLEST Cooler at 62,642 backers and $13.2 million, the most funded project on Kickstarter. The COOLEST Cooler combines blends drinks with speakers for a party-focused cooler. With storage, wheels especially meant for the beach, a bottle opener, and a built-in USB charger, the team behind this cooler was prepared for various party situations.

The third most-backed project was Warhorse Studios’ Kingdom Come: Deliverance at 35,384 backers and £1.1 million. Described as “Dungeons & no Dragons,” the RPG is set in medieval Europe. The player can be a villain or a savior, play as a warrior, rogue, or bard, lead the charge in battles, and more. A successful stretch goal added quests where you play as a stealth-based female character and save the main character. Kingdom Come: Deliverance will also have a symphonic orchestra on soundtrack, a dog companion, a tournament mode, motion capture, and an in-game video teaching combat.

There were plenty of other cool projects; classic click and point adventure game Thimbleweed Park was successfully funded in late 2014 as the spiritual successor to Maniac Mansion from two ex-LucasArts game designers. A smartphone-controlled paper airplane made paper airplanes steerable, a WiFi-connected HDMI stick for HDTV and HD monitors allows people to stream content to a big screen, and a system that monitors your sleep patterns with data about your environment.

Crowdfunding is firmly a part of games, technology, and more today. What kind of projects will we see in 2015?