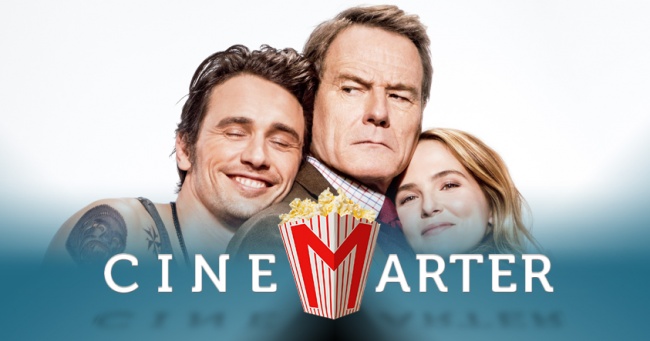 “Okay, so we have this idea for a comedy. We take James Franco, who is enigmatic to his very core, and we have him do a whole bunch of profane, socially unacceptable things. And we make him the boyfriend of a girl whose father will be played by, I dunno, someone capable of being very stoic. How about Daniel Day-Lewis? He’s busy not being in terrible comedies? Fine. Uh, Bryan Cranston? Okay! And then we watch him react – or not react – to Franco’s nonsense for a couple of hours. That’s a solid enough premise for two hours, right? We’ll call it ‘Why Him?‘ because that’s hilarious.”

And thus, Why Him? was born.

This is the type of movie that probably would have worked better as a 5-minute sketch on Saturday Night Live or a comedy show that allows for more colorful language. Stretched into a nearly two-hour movie, though, and it becomes grating far too quickly. The idea isn’t all that fresh – a guy has to try to win the approval of his girlfriend’s father – and about the only thing it has going for it is the “hilarity” that comes from James Franco doing a whole bunch of obnoxious things and seeing Bryan Cranston have to play off them. 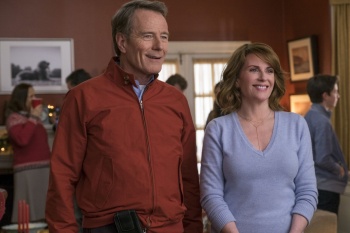 To set all the pieces up: Stephanie (Zoey Deutch) is in college and decides to invite her family over for Christmas to meet (and get his approval of) her previously unmentioned boyfriend, Laird (Franco), who is a wealthy head of a video game company. He also has “literally no filter” and while we can tell early on that his heart is in the right place, his head is usually in the space of an impulsive 15-year-old. Stephanie’s father (Cranston) owns a struggling printing business, and her mother (Megan Mullally) and younger brother (Griffin Gluck), also tag along for the ride – although they wind up relatively inconsequential.

You’ll be unsurprised how any of this works itself out. Why Him? isn’t trying to push open any new doors here, after all; it just wants to be a vulgar comedy that you watch, laugh with, and then instantly forget about. There are more honorable goals, but there are less honorable ones, too. For instance, it could go full “Daddy Knows Best” mode and be intolerable.

Why Him? is a comedy that I didn’t find very funny, in large part because it only has a couple of ideas and repeats them to the point of exhaustion.

Is it funny? Well, like with almost all comedies, your mileage may vary. I didn’t laugh a great deal, especially once it moves past its first 80 minutes and we realize there’s still half an hour to go, but it has a few funny moments scattered throughout. The real problem, comedy-wise, is that it lacks diversity. The majority of the jokes revolve around the same premise: Franco does something, Cranston reacts, rinse and repeat. The “something” is usually overly profane or obnoxious. This can’t sustain 110 minutes of movie.

One could claim that the movie has some sort of heart, which it does, although I don’t know if that makes up for a lack of comedy. Laird has an estate manager (Keegan-Michael Key), with whom he has a couple of conversations about legitimately loving Stephanie and really wanting her father’s blessing. The movie mimics Laird, in that it’s obnoxious and grating, but we should accept it because its feelings are genuine. That doesn’t really work, but it is, I guess, an admirable attempt.

The acting is as perfectly acceptable as one can hope for. James Franco hams it up from the opening to the conclusion, because if you’re hiring James Franco for this type of role, that’s exactly why. Bryan Cranston does his best “stern, but caring” face for the majority of the film. Zoey Deutch is … there for some of it. Megan Mullally only gets a couple of good scenes and lines, while Griffin Gluck is the weakest actor and least interesting character. Keegan-Michael Key does an unplaceable European accent and has a few funny scenes.

Why Him? is a comedy that I didn’t find very funny, in large part because it only has a couple of ideas and repeats them to the point of exhaustion. The actors are fine and game for most of the experience, but there just isn’t enough to the movie – or enough diversity in its jokes – to be worthwhile. It has a few solid moments, it’s true, and its heart is in the right place, but it’s more cringeworthy than funny, more dull than fresh, and more likely to induce headaches than laughs.

Bottom Line: Humor gets stale when consistently repeated, and Why Him? does this far too often to remain funny.

Recommendation: At best, Why Him? is a rainy afternoon movie. But there’s so much else out there that there really isn’t much reason to watch it.